An Inceptor, who is usually part of a close support Inceptor Squad, is the standard Jump Pack-equipped heavy assault unit of the Primaris Space Marines who wear the Gravis variant of Mark X Power Armour and wield twin Assault Bolters into combat.

Amongst the swiftest-moving elements of an Adeptus Astartes strike force, Inceptors fill the role of spearhead troops. They hit the enemy in one sudden and overwhelming blow, leaving them reeling as follow-up waves of Space Marines drive home the attack.

Equipped with heavy Jump Packs and reinforced Mark X Gravis Power Armour, Inceptors can be dropped from the very edge of a planet's atmospheric envelope. Leaping from the assault bays of low-orbiting Attack Craft, these daring warriors brave the fury of re-entry before locking their drop coordinates and jetting towards their objective like missiles. If the enemy detects their approach at all, they will often do so under the misapprehension that the Inceptors are stray warheads, or cast-off debris from orbital combat.

Some squads intentionally make planetfall amidst such falling detritus, weaving through the blazing, tumbling storm of wreckage before breaking away as it flares to nothing, and plunging down into the enemy's midst. By the time the foe realises that they are under attack, the Inceptors are already upon them.

Despite the ground-shattering force with which they land, Inceptors touch down with absolute control, opening fire immediately with the bulky but rapid-firing Assault Bolters that form their primary armaments. Servo-equipped boot-plates allow Inceptor Squads to survive landing at intense speeds, and provide extra boost when they jump from the ground.

Often paired with squads attacking by Drop Pod, Inceptors are the perfect troops to blast out a beachhead and then provide fire support to keep it clear. The tornado of firepower generated by an Inceptor Squad is more than enough to sweep away horrified enemy infantry, slaughter crucial command assets or silence flak batteries before the main Space Marine attack descends. 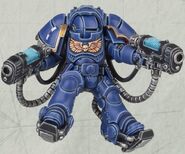 An Inceptor of the Ultramarines Chapter with the expanded rebreather of his Mark X Gravis Power Armour in place to withstand a low orbit combat drop, wielding twin Plasma Exterminators
Add a photo to this gallery
Retrieved from "https://warhammer40k.fandom.com/wiki/Inceptor?oldid=352091"
Community content is available under CC-BY-SA unless otherwise noted.