Imperial Subterranean Vehicles are underground, tunnelling troop transports utilised by a variety of Imperial military forces and collectively known as "tunnellers" or "miners". These machines tunnel their way underground while the battle rages above, bypassing enemy troops and fortifications to emerge behind enemy lines. Tunnellers can move over the surface as well as underground, but as they only travel slowly overland it is more common to transport them to battlefields on huge, tracked transporter vehicles.

Imperial military forces appreciate the value of tunnellers as assault vehicles for overcoming both surface defences and subterranean strongholds, and often deploy them in large numbers. Many of the tunnelling vehicles used by the Imperium were obtained as part of the mutual exchange of materials and technologies between the Squat homeworlds and the Imperium during the Great Crusade of the late 30th Millennium.

The following are the most common subterranean vehicles utilised by Imperial forces:

The Termite is used by the Adeptus Mechanicus as a subterranean transport vehicle. The Termite is the smallest of the tunnellers. It carries two squads of Astra Militarum troops and the various Termites are organised into squadrons for tactical purposes.

Termite squadrons all use the same tunnel, each following behind the other and branching to the surface only at the last moment. The Termite, as well as its counterparts the Mole and the Hellbore, use a phase-field generator to burrow through the ground, whereas the Hades Breaching Drill uses a more "brute-force" approach that applies physical drills.

The Mole is an intermediate-size tunneller vehicle used by the Adeptus Mechanicus as a subterranean transport vehicle, carrying a single platoon of Astra Militarum tactical troops. All Moles carry special communications equipment which allows them to relay orders to the troops they carry.

The Hellbore Heavy Mole is a super-large burrowing vehicle and is the largest of the tunnelling troop transports utilised by the Adeptus Mechanicus known collectively as "tunnellers" or "miners".

It is far larger than both the Termite and the Mole, and like them utlises a phase-field generator to burrow deep underground with its massive drill, carrying many units of Imperial troops safely far below the surface of the earth, beneath enemy fortifications and formations.

This allows the Hellbore to surface behind an enemy's position or the flanks of an enemy fortification at which point its troops disembark for close assault. This vehicle is equipped with Multi-Launchers and Heavy Bolters.

The Hades Breaching Drill is industrial equipment that has been used for both civilian and military purposes by the Imperium of Man. The Hades drill is normally used on Imperial Mining Worlds to help miners dig new tunnels in search of deposits of strategic ores and remove rubble and debris, but there have been several occasions where the Hades has been pressed into military service by the Imperial Guard.

When the Hades is used in a military role it is usually during a prolonged siege, where it serves as a breaching drill that can break into a bunker or through the wall of an enemy fortification. The Hades Drill is equipped with a forward-firing Melta-Cutter that can turn rock and metal into molten slag in seconds. Its massive drilling blades are tipped with Diamantine and can easily cut through most materials, be it rock, metal, or even flesh. 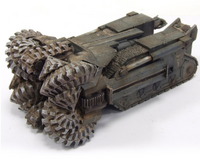 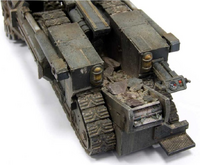 A Hellbore being readied for launch

A Hellbore on its transport

A Mole on its transport 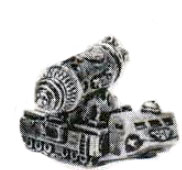 A Termite and its transport 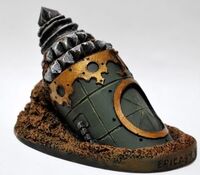 A Termite that has breached the surface 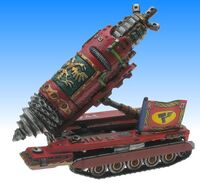 A Squat Hellbore and its transport
Add a photo to this gallery
Retrieved from "https://warhammer40k.fandom.com/wiki/Imperial_Subterranean_Vehicles?oldid=339093"
Community content is available under CC-BY-SA unless otherwise noted.