Imperial Architecture refers to the unique style of design and construction of the various cities, manufactoria, refinery complexes, habitations, religious spaces and similar groups of buildings that are commonplace amongst the developed human-settled worlds of the Imperium of Man.

For ten thousand standard years the Imperium of Man has stretched across the galaxy, conquering world upon world, settling them in the name of the Emperor. Upon every planet settled by Mankind are built vast sprawling cities, each one a metropolis teeming with Imperial citizens. The typical characteristics of Imperial architecture include pointed arches, ribbed vaults and flying buttresses.

This so-called "Imperial Gothic" style represents the underlying design ethic of many of the Ecclesiarchy's great cathedrals, abbeys and churches found across the various worlds of the Imperium and is also the preferred style of many Sanctums Imperialis, palaces, town halls, guild halls, universities and to a less prominent extent even private dwellings, such as dormatories and personal quarters.

The Gothic style is also utilised on the great void-faring vessels of the Imperial Navy, Imperial void stations, star forts and the Imperial merchant fleet. It is in the great churches and cathedrals and in a number of the grander civic buildings that the Imperial Gothic style is expressed most powerfully, its characteristics lending themselves to appeal to the emotions and devotion in the God-Emperor, whether springing from faith or from civic pride.

According to the resource base of the planet in question, this can be stone, brick, wood, coral, volcanic ash, compacted inorganic waste or any of a hundred other materials. Thus, buildings of more or less identical appearance may be found throughout the Imperium, regardless of all considerations other than function.

Since the time of the Great Crusade, Terran engineers aboard Imperial Expeditionary Fleets were exported to all of the new worlds brought into Imperial Compliance by the Administratum. As many of these newly unified worlds' populations boomed enormously under the shelter of the Imperium, hive cities designed by those Terran engineers (utilising STC patterns) were built on even the most isolated or backwater planets, even Death Worlds such as Caliban and Catachan. Though for the most part the architecture remains relatively unchanged and easily recognisable, each world tends to incorporate their own unique style based on local influences.

Life in an Imperial City

Most cities in the Imperium are dark, brooding places where the countless subjects of the God-Emperor eke out a meagre living. Vast stinking factories filled with grinding machines cause the bones to shudder, while blackened chimneys vomit forth thick, dark clouds of toxic smoke, blocking out the sun itself.

Every citizen lives a life of perpetual service, slaving away at back-breaking and mind-numbing tasks for twenty solar hours a day, before dragging their exhausted, labour-wracked bodies beneath their benches to snatch a few solar hours of fitful sleep.

The spires of the wealthy reach high above the clouds of filth and are filled with such opulence as can scarcely be comprehended by those far below. In these sanctuaries of the privileged, nothing is wanted for and the elite live in ignorance and indifference to the suffering in the streets and factories beneath them.

For every city in the Imperium that might be called typical, there are others that defy the senses and beggar belief. Some of these cities stretch kilometres into the sky, towering buttresses of battered stone and rusting metal, vast hives of human life and inhuman suffering. Others sink hundreds of metres below the world's surface, the populace dwelling in vast caves of rock and ice, while others still float on great lakes of water, acid or lava.

There are cities devoted entirely to the worship of the God-Emperor, where the Cult Imperialis reigns supreme and the rooftops echo constantly to the sound of a million voices raised to hymns and prayer. Hosts of pilgrims gather daily, shuffling on blistered feet down dusty streets dedicated to warriors and Imperial Saints long dead, the city illuminated by the light of a billion votive candles, each a vain prayer to an unseen god.

There are cities given to the administration of Humanity's innumerable population and infinite resources, every inhabitant enslaved to routine and process, every last round of ammunition and grain of wheat accounted for by stone-faced scribes. There, the true worth of human life is established by workers jaded by the never-ending monotony of their assigned chore. For most, the cities of the Imperium are merciless and cruel places, where all hope is lost and only mindless subservience remains. 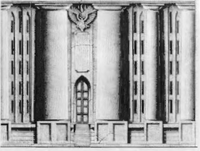 A Chapel of the Ecclesiarchy 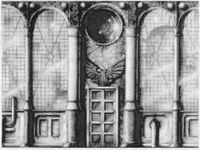 A tyical Generatorium of the Adeptus Mechanicus

A Manufactorum of the Adeptus Mechanicus 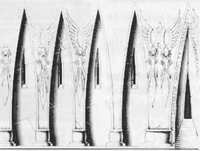 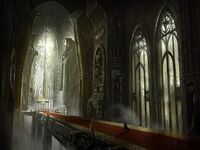 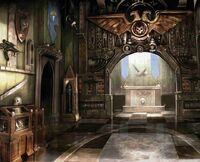 Example of Imperial Gothic architecture in an Inquisitor's private quarters

One of Mankind's greatest examples of Imperial Gothic architecture, the Imperial Palace, located on Terra, which serves as the seat of the Imperium of Man
Add a photo to this gallery
Retrieved from "https://warhammer40k.fandom.com/wiki/Imperial_Architecture?oldid=346565"
Community content is available under CC-BY-SA unless otherwise noted.