Warhammer 40k Wiki
Register
Don't have an account?
Sign In
Advertisement
in: I, Adeptus Mechanicus, Chaos,
and 10 more
English

"How like a God He is, that ancient Machine, primal of all His Kind, the Imperator! His mighty Fists, massive like two Towers of Destruction, laden with Doom of Mankind's bitter Foes. He watches over us now as Battle joins, and in his Shadow we shall advance upon our Enemies and defeat them."

The Imperator-class Titan is the largest and most powerful variant of Emperor-grade Battle Titan ever deployed by the Titan Legions of the Adeptus Mechanicus. It is literally a walking fortress and is armed with much more firepower than the next Battle Titan in size, the smaller Warlord-class Titan.

An Imperator-class Titan is one of the two classes of super-heavy Titans known as Emperor Titans that also include the even more rarely deployed Warmonger-class Titan.

Both classes of Emperor Titan represent the most powerful mobile weapon systems in the arsenal of the Imperium of Man and are often unmatched by any force deployed by the enemy. Emperor Titans are extremely rare in the Imperium as the Adeptus Mechanicus has lost the capability to manufacture these monstrous war engines.

Due to their immense size, Imperator Titans are not nearly as fast or agile as their smaller Scout and Battle Titan counterparts, but they more than make up for this failing with their sheer firepower and heavily armoured bulk.

The most noteworthy feature of an Emperor Titan is the fortified, cathedral-like structure which occupies the entire upper half of the Titan's chassis, sporting ornate, Gothic features like spired towers and stained glass viewing portals. It is often used as a temple by the Titan's crew dedicated to the worship of the Omnissiah.

The building is heavily-armed, and more than capable of contributing to combat. Due to its prominent position, the Titan's head is situated lower than normal on the torso, almost at the same level as the massive arm weapons.

The Tech-priests of the Mechanicus consider the two classes of Emperor Titan to be avatars of the Machine God in the mortal world, walking incarnations of death intended to destroy all those who have displeased the Omnissiah. It is for this reason, more than any other type of Titan, that Emperor-grade Titans are referred to by the Mechanicus as "god-engines."

But this has been known to vary, as the infamous Chaos Imperator Titan Dies Irae of the Legio Mortis that laid siege to the Imperial Palace during the closing days of the Horus Heresy was said to stand approximately 43 metres (141 ft.) tall, a smaller size due to the fact that it had no cathedral dedicated to the God-Emperor on its back since the Imperial Cult had not yet become the state religion of the officially atheist Imperium of that era.

However, these numbers have been disputed, and other sources have indicated that Emperor-grade Titans can stand 60, 70, 90, 100 or even 140 metres tall. All Emperor Titans are also extremely well-protected, outfitted not just with thick armour plating, but 12 separate capital ship-grade Void Shield generators.

These formidable super-heavy combat walkers are the largest and most powerful war machines at the disposal of the Imperium (with the exception of void ships); their firepower remains unrivalled by any other land unit used by any of the other factions of the galaxy.

The size of their arm-mounted primary weapons are surpassed only by the ordnance of the largest capital ships of the Imperial Navy. They are loaded to the brim with pre-installed weapons, and their mounts can handle Titan weapons too big for even other Battle Titans.

Emperor Titans do not carry any close-combat weapons, as their sole focus is on extreme, ranged firepower. Emperor Titans are very rare, and can crush many weaker war engines. Taking advantage of this formidable firepower, the Imperator Titan bombards enemy positions with an awesome and relentless barrage, while remaining far out of range of most enemy artillery.

The Imperator and Warmonger-class Titans can carry two arm-mounted primary weapons from the following Titan-grade armaments:

The Imperator and Warmonger-class Titans can carry up to six carapace-mounted secondary weapons from the following Titan-grade armaments:

Imperator and Warmonger-class Emperor Titans are crewed by one Princeps who commands the Titan and a number of Moderati who control and service its weapon systems, with multiple tech-priests and servitors stationed aboard the massive walker to provide basic technical support and maintenance during combat.

In comparison to Battle Titans of all other classes, the Imperators and Warmongers are rare in the Adeptus Titanicus, with most Titan Legions only able to field three or four in a campaign.

These monstrous war engines are commanded by only the most battle-hardened Princeps. Their crews are composed of the finest crew members from other Titans within the Legion.

The Titan Legion's Grand Master often uses an Imperator Titan as their mobile headquarters from where they can issue commands or lead vital assaults personally.

Imperators are most often employed as vast mobile fortresses, strengthening vulnerable sectors of Imperial battlelines or to act as a reserve force when Imperial assaults threaten to bog down or be defeated.

These Titans also often spearhead massive assaults when a major Imperial offensive begins, their immense firepower being brought to bear against enemy lines.

Imperators are not configured to fight other Titans in close combat, relying instead on their deadly firepower to utterly annihilate their opponents before they can close in and engage.

A complete company of Astra Militarum troops or Adeptus Mechanicus Skitarii cybernetic soldiers can be housed aboard the Imperator to guard it against infantry assaults or to be transported to vital objectives.

The Warmonger-class Emperor Titan is a notable variant of the Imperator Titan, and is very similar to its counterpart in both structure and appearance. It is unknown which variant was designed first as this knowledge has been lost down the long millennia of the Imperium's existence.

However, it is well-documented that both the Warmonger and Imperator Emperor Titans were both utilised extensively long before the outbreak of the galaxy-wide conflict of the Horus Heresy.

Though they are physically similar, the functions of each class varies significantly. The weapons systems of the Warmonger variant provides it with a longer-ranged and more accurate deep strike/fire-support capability, allowing the Warmonger-class to stand back and pound its foes from even further than its counterpart.

In battle, Warmongers will usually be held back to provide long-range fire support, bringing down devastating salvos of missiles and defence laser fire on the enemy, while other units forge ahead and drive into the heart of the foe's lines.

This capability makes this particular Emperor Titan a magnet for enemy air support. However, the Warmonger has a healthy array of anti-aircraft systems, not to mention a sufficient number of Void Shields, to keep these threats at bay. This often leaves enemy commanders unsure how best to deal with this deadly foe. 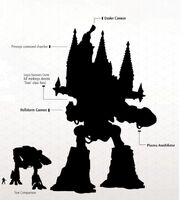 Size comparison between an Imperator-class Battle Titan, a Warhound-class Scout Titan and an Imperial Guardsman 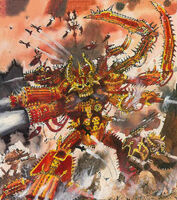