Green & Purple
Il-Kaithe is one of the lesser-known Asuryani craftworlds. Being located close to the Eye of Terror, the Aeldari of Il-Kaithe constantly wage war against the forces of Chaos.

Il-Kaithe, meaning "Knowledge of Blood," was once best known for its Bonesingers' creativity. Their talented Bonesingers are said to be able to practice their art even in the heat of battle.

Since the dawn of the 41st Millennium, Il-Kaithe has become renowned for its merciless crusades against the forces of the Dark Gods.

The traditional colours of Il-Kaithe are green detailed with purple trim. The world-rune of Il-Kaithe, known as the "Helm of Eldanesh," represents the all-seeing helm the Aeldari hero Eldanesh received from the god Asuryan himself.

The Lay of the House of Eldanesh describes how the Aeldari epic hero defeated gods and monsters alike with the prescience that it gave him, but in the end he fell prey to his own curiosity and foresaw his own bloody demise at the hands of Khaine.

This craftworld's rune is a bleak reminder of the price that knowledge can bear and its terrible cost.

Il-Kaithe's story begins with the Fall of the Aeldari -- the dying days of the Aeldari Empire, when the monstrous birth of Slaanesh shattered their civilisation, and the survivors fled in disarray across the stars. As one of the last craftworlds to flee the Aeldari homeworlds before the Fall, its occupants saw first-hand the dark seduction and temptations of Chaos.

An Asuryani Guardian of Craftworld Il'Kaithe. 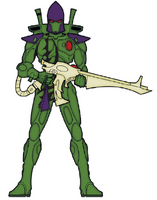 An Asuryani Guardian of Il-Kaithe with death-rune marking his Aspect Armour.
Add a photo to this gallery
Retrieved from "https://warhammer40k.fandom.com/wiki/Il-Kaithe?oldid=375664"
Community content is available under CC-BY-SA unless otherwise noted.