The Hydra Flak Tank, also known simply as the Hydra, is the main mobile anti-air artillery piece of the Astra Militarum. It is produced on hundreds of Forge Worlds across the Imperium and is widely-used in nearly every regiment. The Hydra, like many other Imperial military vehicles, is based on the Chimera armoured personnel carrier chassis, and is armed with a set of twin-linked Hydra Autocannons. Hydra Autocannons are a set of long-barrelled Autocannons mounted on a turret with highly sophisticated tracking and targeting equipment.

The Hydra is used to defend important ground units such as Imperial Guard artillery batteries and armoured columns from enemy air attacks. Non-mobile units or structures are usually defended by a Hydra Platform, a stationary version of the Hydra Autocannon, while the Hydra itself is generally deployed with mobile units. The Hydra's powerful guns are capable of quickly reducing enemy aircraft to smoking debris, but they can also be levelled towards the ground to engage enemy infantry and lightly armoured vehicles when circumstances warrant. The Hydra's Autocannons are so effective in the destruction of enemy infantry that Imperial commanders often overlook this breach in regulations and some regiments will use their Hydras as front-line vehicles when the threat of air attack is reduced or no longer present. Hydra tanks are usually kept in their own company within a regiment, but are rarely deployed together in company formation and are instead assigned to other companies which require air defence.

Whether faced by lightning-fast xenos fighters or daemonic, leather-winged monstrosities, the Hydra Flak Tank is ideally equipped to blow aerial foes out of the sky. The Hydra's predictive logic-spirit singles out and locks onto its targets with the tenacity of a predatory beast. Autoloaders engage with a rising whine as the Hydra's turret traverses, its quad Autocannon howling as it fills the air with sawing lines of firepower. Few airborne enemies, no matter how debased or unnatural, can survive for long once they are locked in the Hydra's sights.

Though the Hydra has sufficient armour to weather a fair degree of punishment, it is intended primarily as a support vehicle rather than a main line battle tank. Nonetheless, the Hydra is far from defenceless. Its hull can be fitted with various armaments, and its Autocannon can be angled downward to slaughter grounded enemies when necessary. However, the Hydra's Machine Spirit hungers only for airborne prey, its tracking servos refusing to trace the lumbering paths made by foes that cannot fly, meaning it must be aimed manually and, therefore, less accurately when targeting opponents on the ground. Company Commanders must therefore ensure they have seconded enough infantry or tanks to guard their Hydra batteries from direct attack. With a sufficient escort the Hydras can remain safe from harm while concentrating their efforts on keeping the skies clear.

For most Imperial Guardsmen, be they artillery crew, tankers or foot-slogging infantry, the screaming approach of enemy aircraft is a sound that evokes absolute dread. When the black shadow of monstrous wings falls across them, the men of the Guard have little defence besides prayer. So it is that the Hydra has acquired a reputation as an omen of good luck. With nicknames ranging from "steel saviours" to the more colloquial "bug-zapper," Hydras are viewed with comradely affection by most soldiers in the Astra Militarum. A common tradition amongst the men of many regiments is to rap their knuckles against the hull of a Hydra before battle; this so-called "angel's knock" is performed in solemn silence and intended to draw the vigilance of the Hydra's Machine Spirit in the battle to come. Hydra crews share in their vehicles' popularity, enjoying something approaching folk-hero status amongst their comrades and a place around any squad's camp fire. Some Hydra crewmen revel in the regard of their comrades and the adrenaline rush of their duty, while others find the weight of responsibility uncomfortable, but few are foolish enough to believe the camaraderie of their fellows is untainted by self-interest.

The Hydra is armed with a turret-mounted set of twin-linked Hydra Autocannons, long-barrelled Autocannons that unleash explosive flak rounds at an extremely high rate of fire. The Hydra's gunner and loader are positioned in the vehicle's turret and work together to keep the weapon's automated loading mechanism and complex targeting systems operational. The vehicle is also armed with a single hull-mounted Heavy Bolter, which can be used against enemy infantry that get too close or can be swapped out for a Heavy Flamer for the same purpose. The tank can also be equipped with Camouflage Netting, Extra Armour Plating, a Hunter-Killer Missile Launcher, a mine sweeper, improved communications equipment, a Pintle-mounted Heavy Stubber or Storm Bolter, rough terrain modifications, a Searchlight, track guards, and Smoke Launchers.

Even a single Hydra can throw up a storm of flak, swatting enemy aircraft from the skies with an adamantine fist. When several of these vehicles draw up and open fire, the devastation wrought on airborne foes is spectacular. Monstrous xenos wings are reduced to streamers of flesh, the gibbous flight-sacks of daemonic drones burst under the weight of puncturing fire, and even heavily armoured Attack Craft are reduced to perforated scrap as their fuel tanks and internal magazines explode.

The following is the list of all known Hydra variants:

Known Users of the Hydra 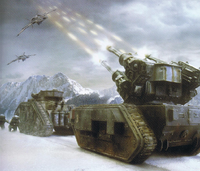 A Hydra of the 28th Valhallan Armoured Regiment, stationed on the planet Betalis IV 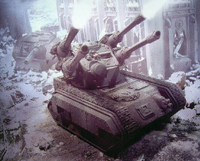 A Hydra opening fire on an enemy aircraft
Español
Community content is available under CC-BY-SA unless otherwise noted.
Advertisement