"The Storm of Silence"

The banshee is a harbinger of woe in Aeldari Mythology. It is fitting that these most feared of all the Aeldari Aspect Warriors draw their inspiration from this creature.

These lightly-equipped warrior-women are fearsome melee combat specialists who draw their inspiration from the unearthly creature with which they share a name.

What the Howling Banshees lack in brute strength they make up for with their uncanny and inhuman precision and efficiency. The piercing warcry of these Aspect Warriors has heralded the coming doom of countless enemies of the Aeldari people.

According to the tales of Aeldari Mythology, the spectral creatures known as banshees are the harbingers of grief and death. It is said that their cry heralds misfortune and the certainty of coming death, and calls forth dead spirits from the Warp.

Even worse from the Aeldari point of view, are those stories which claim that a banshee's cry may even call the spirits of the dead out from the safety of their Spirit Stones and thus lure them into the waiting embrace of Slaanesh, "She Who Thirsts."

What is known is that the release of an Aeldari spirit into the Warp is always accompanied by a terrible shriek, one which is felt by the soul rather than heard, and that Aeldari spirits have been known to disperse unexpectedly into the Immaterium during the transference between Spirit Stones or even from a Spirit Stone into a Craftworld's Infinity Circuit.

Legend says that the Howling Banshees Aspect was first created when the Aeldari Crone Goddess Morai-Heg desired the knowledge contained within her own divine blood and to this end sent her daughters, the banshees, to haunt their father, the War God Kaela Mensha Khaine, as he was the only being capable of harming another God.

Seeking to end the torment caused by the banshees' constant wailing, Khaine decided to grant Morai-Heg her wish and severed her hand, which allowed her to drink the knowledge contained within her own blood.

When the Phoenix Lord Asurmen raised the first Aspect Warriors, he selected the warrior Jain Zar for her ferocity and speed, whereupon she became the first of her race to lose herself upon the Path of the Warrior and become an Exarch, and then she became the Howling Banshee Phoenix Lord. Of all the Phoenix Lords, Jain Zar is the most devoted to her Aspect Shrines, travelling the Webway to spread and nurture her Aspect's teachings on every Craftworld within reach.

In 838.M41 in the campaign that became known as the Pyre of Kiliak's Bane, Imperial xenologists began to plunder buried Aeldari artefacts on the Maiden World of Kiliak, bringing about a devastating retaliatory assault from the nearby Craftworlds of Biel-Tan and Ulthwé.

A sighting of the Phoenix Lord Jain Zar, accompanied by one hundred of her Howling Banshee disciples, was confirmed before the entire Imperial force was slaughtered and incinerated, their ashes scattered to the winds in retribution for their assault upon the Aeldari's lost patrimony.

A notable exception in the otherwise genderless meritocracy that is the society of the Craftworld Aeldari, the Howling Banshees are almost always female. This is because the banshees of Aeldari legend, the daughters of the Crone Goddess Morai-Heg, are themselves always female spirits.

However, it is possible for Aeldari males to walk the Path of the Howling Banshee, though this is extraordinarily rare due to the lack of the needed psychological and physical assets amongst most males.

However, there do exist several males amongst the ranks of the Banshees, often Autarchs pausing on their advance along the Path of Command in order to master yet another aspect of Khaine. These often unique individuals are welcomed equally into the Aspect by their sisters-in-arms as long as they prove able to master the varied demands of the Aspect.

Fast and athletic, the Aspect of the Howling Banshee emphasises swiftness of foot and the importance of mobility in hand-to-hand combat when training their Aspect Warriors. Howling Banshee Aspect Armour is coloured bone-white and contrasts sharply with the flaming shock of orange hair that marks each Aspect Warrior.

The forces unleashed by the Banshee Mask can inflict severe damage to the central nervous system of a Banshee's foe; inspiring a feeling of mortal terror and causing momentary paralysis to take hold over a victim's body. A full squad of Banshees activating their masks in unison can cripple an enemy unit before a single blow is struck, leaving them paralysed and helpless before their onslaught.

Howling Banshees each utilise a Shuriken Pistol and an Aeldari Power Sword in combat. This armament enables them to carve through even the toughest of enemy armour. Skillful use of their pistol can also eliminate vulnerable targets whilst their blade brings down heavily armoured foes such as Space Marines.

Exarchs of the Howling Banshees Aspect Shrine can wield a deadly pair of Mirrorswords or the dreaded Executioner, a potent, powered polearm.

Howling Banshees operate in squads of five to ten warriors, and these squads are sometimes lead by their Exarch. While capable of extraordinarily rapid transit on foot, these squads may also make use of Wave Serpent transports to move to their destinations even more rapidly.

An Aeldari Exarch is the leader of an Aspect Shrine. An Exarch has traveled so far down the Path of the Warrior that he or she can no longer leave it and so dedicates him or herself fully as a high priest of Khaine in service to the Aspect of the War God that he or she represents.

Exarchs wear more elaborate and ornate versions of Aspect Armour which incorporates the spirits of their past wearers, granting an Exarch not only wisdom and knowledge stretching across the millennia but a raw pool of potent psychic energy that can be used in combat.

Under the guidance of their female Exarch, a squad of Howling Banshees are acrobatic warriors, leaping and bounding into combat with deadly grace, while the psychosonic war shout delivered by an Exarch's Banshee Mask is even more devastating to the foe than the normal piercing cry of the Howling Banshees.

Instead of a normal Aeldari Power Weapon, some Howling Banshees Exarchs will wield an Executioner or Triskele, while others will replace both Power Weapon and Shuriken Pistol for twin Mirrorswords, practicing an arcane and ancient form of Aeldari swordplay that allows the Exarch to maximise her inhuman close combat abilities with the blades and make her one of the deadliest melee warriors in the galaxy.

The Phoenix Lord of the Howling Banshees is Jain Zar, "the Storm of Silence." In the time after the Fall of the Eldar, she was the first warrior of her race chosen to serve at the side of the first Phoenix Lord, Asurmen, and the first to become an Exarch, those Aeldari who can never leave the Path of the Warrior for they can never take off the war mask of Khaine.

Jain Zar travelled the Webway after her time with Asurmen, teaching her skills to the rest of the Aeldari, and leading others along the Warrior Path. Soon there were shrines to the Howling Banshees on all the large Craftworlds, and many Howling Banshees Exarchs to teach the warrior skills of Jain Zar to future generations.

Of all the Phoenix Lords, Jain Zar is the most devoted to the shrines of the Warrior Aspects throughout the Craftworlds. She travels the Webway, visiting the shrines and nurturing her spiritual descendants.

An acrobat at heart like the Harlequin, Jain Zar (which translates into Low Gothic from the Aeldari Lexicon as "The Storm of Silence") is the fastest of all the Phoenix Lords save for Baharroth, the Phoenix Lord of the Swooping Hawks.

Jain Zar still travels the labyrinthine corridors of the Webway, spreading her particular martial knowledge to all but the most remote of the Aeldari Craftworlds. Although she is known to disappear for entire standard centuries at a time, she always returns, and the shrines of the Howling Banshees maintain a constant vigil in preparation for her coming. 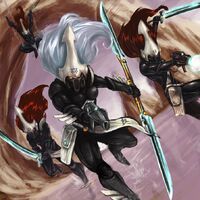 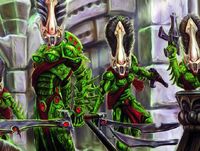 Howling Banshees of the Biel-Tan Craftworld 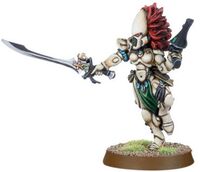 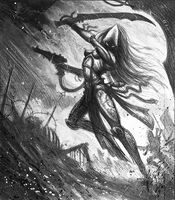 A Howling Banshee leaps into the fray

A Howling Banshees Banner of the Ebon Witch Shrine

A Howling Banshees Banner of the Shrieking Blade shrine

Howling Banshee Exarch of the Shrieking Blade shrine. The Exarchs of this shrine favour the use of Mirrorswords, slaying their foes in a flurry of strikes.

A Howling Banshees Banner of the Crimson Scream shrine

Howling Banshee Aspect Warrior of The Crimson Scream shrine
Add a photo to this gallery
Retrieved from "https://warhammer40k.fandom.com/wiki/Howling_Banshees?oldid=351781"
Community content is available under CC-BY-SA unless otherwise noted.