House Vextrix is a Renegade Knight House formerly of the Questor Mechanicus that repudiated its oath of loyalty to the Mechanicum and the Imperium of Man during the Horus Heresy.

Since being declared an Infernal house of Chaos Knights, the Knights of Vextrix have welcomed the corrupting influence of the Dark Mechanicum. The more warped a Knight becomes in service to the Dark Gods, the higher their status.

Dread campaigns are frequently launched from the Fallen Knight World of Daxos Gemini to uncover repositories of knowledge that have remained hidden since the Dark Age of Technology, and to acquire esoteric xenos machinery that the Tech-priests of Mars consider heretical.

Daxos Gemini is covered in the sprawling forge metropolises of the Dark Mechanicum. Inside these vast factory-cities the Knights of House Vextrix continually augment their mechanical forms, warping their war engines into perfect embodiments of Chaos.

The Knights of House Vextrix are amongst the most loyal servants of the Legio Mortis Traitor Titan Legion, who are known to many in the Imperium as the "Death's Heads."

When the world of Daxos Gemini -- upon which the Vextrix nobility ruled – was rediscovered during the Great Crusade, its Knights became fervent warriors of the Omnissiah, waging devastating wars against all who opposed the Machine God. On several occasions they even fought alongside their Titan lieges as the praetorian guard of the Fabricator-General of Mars. It was this unquestioning devotion that was to be their downfall.

When the Death's Heads fell to Chaos, the entirety of House Vextrix followed them into damnation. Those named as enemies by the Legio Mortis were also marked for death by the Fallen Nobles of Daxos Gemini, and wherever the Traitor Titans prosecuted their heretical wars they were accompanied by lances of Vextrix Knights.

House Vextrix were amongst the Heretics who participated in the Battle of Beta-Garmon during the Horus Heresy, in which hundreds of Loyalist and Traitor Titans were obliterated. The Vextrix Knights also suffered staggering casualties, but this only served to stoke their hatred of the Imperium, and of those who continued to blindly serve the Omnissiah.

The colours of House Vextrix are black and green.

The heraldry of House Vextrix is a black skull centred within the white Opus Machina, impaled by a black sword. 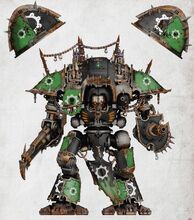 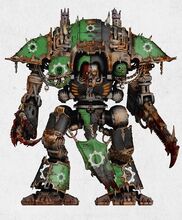 The House Vextrix Knight Rampager Anvil of Trevenek piloted by Trevenek LVI
Add a photo to this gallery
Retrieved from "https://warhammer40k.fandom.com/wiki/House_Vextrix?oldid=352394"
Community content is available under CC-BY-SA unless otherwise noted.