House Reinharn is a Loyalist Imperial Knight House of the Imperium. There is little information on this knightly house in official Imperial records or what Knight World they originally hailed from. It is rumoured that the Freeblade Retribution Incarnate is the last surviving noble of House Reinharn, which was destroyed in the Macharian Crusade in the late 390's.M41, though the Knight bears no trace of that house's livery or heraldry. The truth has never come to light.

The colours of House Reinharn are not listed in current Imperial records.

The arms of House Reinharn are not listed in current Imperial records. 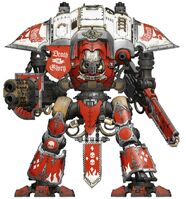 The mysterious Freeblade Retribution Incarnate
Add a photo to this gallery
Retrieved from "https://warhammer40k.fandom.com/wiki/House_Reinharn?oldid=328925"
Community content is available under CC-BY-SA unless otherwise noted.