House Mordred is a Renegade Knight House formerly of the Questor Mechanicus that repudiated its oath of loyalty to the Mechanicum and the Imperium of Man during the Horus Heresy.

The Knights of House Mordred are fiercely loyal to the Forge World of Incaladion and the sinister Legio Fureans that serves it.

When Incaladion was corrupted by the Dark Mechanicum, House Mordred stuck by the Forge World's rulers and sided with the Warmaster Horus during his rebellion.

Drawn from the same world as the Legio Fureans, House Mordred was founded during the Age of Strife. Loyal to the Forge World's rulers, the house found itself embroiled in the near-constant cycle of battle that wracked Incaladion until it was liberated by the Great Crusade.

This millennia of warfare saw the two entities forge an eternal bond of brotherhood that called both into service at the forefront of the Great Crusade. This brotherhood was reaffirmed each time House Mordred and the Tiger Eyes shared the field of battle through ceremonies often deemed crude and primitive to outside observers.

In exceptional cases a princeps would accept a banner of Knights as sworn vassals, the Knights swearing oaths in ritualistic trials of blood that superseded any oath they had previously spoken. This seemingly unshakable bond ensured that when the Tiger Eyes declared for the Warmaster, House Mordred followed in their wake.

The uncompromising reputation House Mordred held proved indispensable in the opening years of the Horus Heresy, for their Nobles showed no hesitation in turning upon those they once fought alongside.

Much of House Mordred's strength remained at the side of the Legio Fureans, their numbers making notable contributions to both the invasion of Paramar V and the subsequent conflict in the Beta-Garmon Cluster.

The remaining strength was pledged to the Warmaster as tribute, serving under his will above all others and bringing wanton slaughter to dozens of worlds in his name.

The warfare practiced by House Mordred was methodical and brutal, for they marched in the shadow of Titans to eradicate anything that dared survive the power of the god-engines.

For House Mordred, mercy was an unfathomable concept and none was offered to those within conquered cities, for they cared little for the distinction between the innocent and the guilty.

When the house was engaged in theatres of war separate from the Legio Fureans, such behaviour often placed them at odds with commanders more appreciative towards the value of life and many were the requests that House Mordred's savage excesses be reined in.

Many within House Mordred were ardent believers in the rituals of their homeworld and would often refuse to send their banners into battle without observing the lengthy rites of devotion to House Mordred's feral representation of the Omnissiah.

These beliefs could not be called into question and none, friend or foe, were spared these Knights' wrath should they show disrespect to the practices of the Household.

The colours of House Mordred are black and red with gold trim.

The arms of House Mordred is a stylised white serpent wrapped around a great sword pointing downwards. 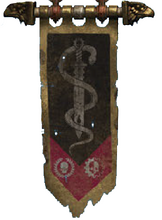 House Mordred Questoris Knights.
Add a photo to this gallery
Retrieved from "https://warhammer40k.fandom.com/wiki/House_Mordred?oldid=361349"
Community content is available under CC-BY-SA unless otherwise noted.