They have waged multiple barbaric campaigns against the Imperium, butchering those who fight in the Emperor's name in all corners of the galaxy, and over the course of ten thousand Terran years have reaped a toll of carnage too high for any single scriptorum to record.

They have been called the "House of Serpents," the "Fanged Knights" and many other names, but whatever they are called, the Knights of Lucaris are always synonymous with terror.

Morda Prime -- the homeworld of House Lucaris -- is shrouded in perpetually raging storms. It is from beneath this lightning-scape that the Lucaris Knights launch their dread campaigns, striking out at Imperial holdings across the galaxy.

During the Great Crusade, the Luna Wolves Legion arrived at the tempest-wreathed world of Morda Prime, where they found the Knights of House Lucaris. The Nobles of the household immediately swore allegiance to Horus, for in the Warmaster they saw manifested their own tenets of virtue through strength, and mercy through dominance.

They answered his calls to battle without question, employing thunderous assaults to crush all who dared oppose their liege's will. Even when he turned to Chaos, the Knights of Morda Prime held true to their vows of service.

When the Warmaster was killed at the Siege of Terra, House Lucaris swore an oath of undying enmity against the Emperor. They also forswore their allegiance to the Black Legion, successor of the Sons of Horus, which had abandoned its fallen Primarch.

In the millennia since, House Lucaris has waged apocalyptic wars against both the Imperium and the Heretic Astartes, though in more recent centuries there have been accounts of them marching alongside the Black Legion once more.

Only the Fallen Nobles of Morda Prime and Abaddon himself know if this newfound alliance constitutes a reforging of their bonds of old.

On the Death World of Friggenswald, Renegade Astra Militarum infantry regiments laid siege to the towering fortress known as Graggen Keep. Though the keep was defended by only a handful of soldiers, two factors prevented the attackers from achieving a swift victory.

The sludgy acidic river surrounding the fortress instantly dissolved those Renegades who attempted to launch an assault. Furthermore, from its position inside the walls, the Freeblade Knight Unflinching Steel fired a ceaseless hail of Rapid-Fire Battle Cannon shells into the ranks of the encroaching army. The Knight had once been a member of House Lucaris, but had abandoned his household when they turned Traitor, and had fought valiantly for the Imperium ever since.

Yet the initial victories of the defenders only delayed the inevitable. The Chaos Knights of House Lucaris arrived on Friggenswald and marched upon Graggen Keep. Having served their purpose of holding Unflinching Steel in place, the Renegades withdrww out of firing range while the Lucaris Knights wade through the acid flows surrounding the fortress.

A trio of Knights Rampager made short work of the fortress walls, allowing the remaining war engines to pour through the breach and annihilate the defenders. Unflinching Steel was brought down and dismembered by the members of its former household, but was not destroyed. Instead, its battered and mutilated chassis was taken back to Morda Prime to face judgement.

The Great Game for supremacy between the Chaos Gods eventually spilled into realspace, leading to a series of hellish conflicts across the worlds deep in the Imperium Nihilus. Greatest of these was the Battle of Vigrid, where vast armies of each of the Ruinous Powers engaged in a sprawling combat.

Eventually a contest of champions was proposed whereby the Greater Daemons of each god would engage in single combat. The nightmarish war cries from this contest echoed through the Warp, liquefying the minds of psykers for light years in every direction -- and drawing the attention of House Lucaris.

Four Lucaris Knights were sent to engage in the Vigrid tourney, to prove the might of the Iconoclast house. Those Knights that duelled the champions of Khorne, Nurgle and Slaanesh were all victorious, but it soon became apparent that they had been bestowed with a portion of Tzeentch's fate-bending power.

These three Chaos Knights managed to escape the battle zone before the daemonic armies descended into open war once more, carrying with them the sorcerous gifts of the Changer of Ways.

The arms of House Lucaris are a sinuous, red serpent with a lashing tongue. 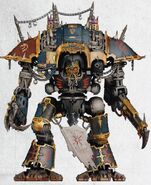 The House Lucaris Knight Despoiler Thunderhead piloted by Lady Elsyr.
Add a photo to this gallery
Retrieved from "https://warhammer40k.fandom.com/wiki/House_Lucaris?oldid=352412"
Community content is available under CC-BY-SA unless otherwise noted.