"Through flame lies the path to victory."

Red, black and brass
House Khymere is a Renegade Knight house of Chaos Knights. The Khymere are considered an Iconoclast house, though for thousands of years they were staunchly loyal to the Imperium.

After the opening of the Great Rift in the late 41st Millennium House Khymere was corrupted to the service of Chaos when its homeworld was unexpectedly attacked by a force of the Indomitus Crusade, whose Space Marines claimed Chaos-corrupted House Khymere Knights had been attacking Imperial worlds.

Unwilling to make war against the Imperium they had so long defended, the entire house fled into the Warp Storms of the Great Rift. Their exposure to the empyrean energies of the Warp corrupted many of the Khymere Knights, who returned to realspace filled with hatred for those they felt had betrayed them.

Unknown to the Chaos Knights, their travels in the Warp had also displaced them in time. The Renegade Knights had been thrust into their own past, unleashing the very attacks that had led to the Imperial assault that resulted in their damnation.

The Khymere homeworld of Surtr's Wake is a desolate graveyard, lined with crumbling statues built by the Nobles of House Khymere and littered with the remains of felled Knights. Since their exodus, the Iconoclast household that once called this lost world their home have not returned.

For ten thousand Terran years the Knights of House Khymere had fought ferociously for the glory of the Imperium of Man. The cracked and burning surface of Surtr's Wake was dotted with monolithic statues of the Emperor, towards which the faithful serf classes of the planet prayed for solar hours every day.

Many times did the Nobles answer the summons to join a gathering Imperial Crusade, and when desperate pleas for aid came from nearby star systems, the Knights of Khymere marched with burning wrath against the enemies of Mankind.

Yet when the Cicatrix Maledictum tore across the stars, the Knights of House Khymere were amongst the nightmarish warriors who burst from the Great Rift to prey upon the worlds of the Imperium. Many of these once-valiant war engines were hideously twisted, the corruption that had evidently taken hold of them expressed in their grotesque forms and rampant cruelty.

In an edict that caused great anguish to those they had once served, the Knights of House Khymere were declared Iconoclast, and Surtr's Wake -- now shrouded within the Imperium Nihilus -- was marked for destruction.

When the Indomitus Crusade reached Surtr's Wake, Adeptus Astartes strike forces of the Ultramarines and White Scars Chapters were tasked with launching an execution assault against the planet. But the warriors of House Khymere offered no resistance to the Imperial attack; the nobility -- seemingly untouched by Chaos taint -- could not fathom that they had been deemed Traitors, nor could they bring themselves to raise their weapons against those to whom they had sworn loyalty.

Instead, the entire house withdrew from the planet. They marched their Knights onto vast fleets of mass conveyance barges and fled from judgement by disappearing into the roiling tumult of the Great Rift. In truth, the house was displaced through time during its sojourn in the Empyrean, its Knights returning to realspace in their own past.

Lances of Khymere Knights continue to burst into reality along the length of the Great Rift. Where they appear, their wrath is quickly turned upon the defenders of the Imperium. Attempts to treat with them have been met with silence or maddened ramblings, for what nobility once existed in the house is now long gone.

Above the gas giant of Rho Zapphire, a strike force from the White Scars 6th Company fought a war of speed against an invading host of Slaaneshi daemons soon after the opening of the Great Rift. The Space Marines raced to secure the vital aether-derricks that are suspended in the planet's thermosphere, cutting their way through screaming droves of Daemonettes and Fiends of Slaanesh that skittered along the equatorial gantries, even as more depraved beings pour from the nearby maw of the Great Rift.

The fuel from these derricks was crucial for the Imperial fleets withdrawing from the encroaching Warp Storms of the newborn Great Rift, but the daemons outnumbered the White Scars a hundred times over. The battle appeared to take a shift when a flotilla of macro-conveyance barges swooped into low orbit and disgorged its cargo of Knights.

But the hope of reinforcements was short-lived. The Chaos Knights of House Khymere that marched onto the floating gantries opened fire on the Space Marines, obliterating those few that remained.

When cruisers from the Imperial Navy arrived to refuel, the Chaos Knights departed, but not before overloading the core of each aether-derrick. The ensuing chain reactions ignited the volatile atmosphere of Rho Zapphire, incinerating the refuelling fleets as the entire planet exploded.

The heraldry of House Khymere is a black horse which breathes yellow fire. 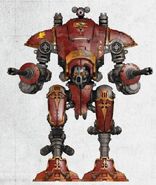 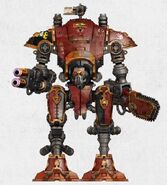