"The honourless are our prey."

House Khomentis is a Renegade Knight house of Chaos Knights and an Infernal house in service to the Dark Mechanicum. Though once loyal to the Imperium, the house's homeworld of Matarakh was struck by a daemonic invasion in the 33rd Millennium.

During this time House Khomentis was turned to the service of Chaos and the Dark Mechanicum. Its Fallen Nobles are most famous for actively seeking out daemons in the hope of becoming possessed and further corrupting their Knight to the service of the Dark Gods.

The strip-mined sands of Matarakh are now home to all manner of daemonic creatures that are both revered and hunted by the Knights of House Khomentis. Whole continents have been carved into summoning circles to draw more Warp entities into existence.

House Khomentis arose on the Desert World of Matarakh, and developed a culture in which the predatory creatures that stalked the mountainous dunes were revered as hunting companions. Nobles trained for their Ritual of Becoming by setting out into the sandy wastes without food, water or weapons in pursuit of a Matarakhi beast.

Only after subduing one of these creatures, such as a savage vharrat or winged vultris, would they return to the safety of their keeps. The Nobles believed these animals served as eternal spiritual guides, and so the nature of the beast an aspirant captured determined the nature of the Knight suit to which they would be bonded.

When Matarakh was discovered by the Imperium during the Great Crusade, its indigenous fauna was quickly wiped out. Vast Mechanicum strip mines were constructed to extract the mineral wealth that lay beneath the sands, while towering processing hive cities belched toxins into the atmosphere, rendering the surface of the world inimical to all but the hardiest life forms.

Despite this, the Khomentis Knights pledged themselves to the Omnissiah, and fought boldly for the Imperium throughout the Horus Heresy.

It was not until the 33rd Millennium, when Matarakh was engulfed by a daemonic incursion, that House Khomentis turned to Chaos. No Imperial record exists of the nightmares that befell the world, but the Khomentis Knights now fight for the Dark Mechanicum.

With lances that can spread across an entire continent they close in around their enemy's position, encircling their prey and cutting off all routes of escape.

In place of predatory animals, the Fallen Nobles now seek out daemons as a rite of passage, allowing themselves to become possessed so that the Warp entities can intermingle with their Thrones Mechanicum and the Machine Spirits of their Knight suits.

Over long Terran years these daemons eat away at their hosts, twisting their flesh, mutilating their minds and devouring their souls. The fate of all such pilots is to be pulled from their Thrones at the point that their body collapses into a fleeting Warp fissure.

During this nightmarish implosion, more Chaos entities are loosed into reality, and these too are hunted by new aspirants. Thus is the grotesque cycle of possession allowed to eternally propagate.

Whilst en route to the War Zone Kilda, the mass conveyance barge Dark Cloud became stranded in the Warp with a full lance of Imperial Knights of House Mortan waiting in its hangar. The Gellar Field that shielded the disabled craft from the denizens of the Empyrean holds firm at first, until a series of massive objects impact with the ship's hull.

The objects turned out to be Chaos Knights of House Khomentis. After clamping themselves to the barge, the Khomentis Knights begin blasting and cutting their way through its outer bulkheads to allow waves of Warp energy to flood inwards.

Knowing that the Dark Cloud could not survive long against such an assault, the Knights of House Mortan ventured out onto the barge's exterior to do battle with their corrupted attackers. Though they fought bravely, the Mortan Knights were blasted to scrap by the Chaos Knights, and the souls of their pilots devoured by great flocks of predatory daemons. With its last line of defence annihilated, the Dark Cloud was swiftly torn apart.

On the Jungle World of Y'tach'grra, a lone War Dog of House Khomentis was cut down by a roving band of Kroot mercenaries. As was their custom, the carnivorous Kroot pried the pilot from the fallen war engine and devoured his flesh.

But in doing so the daemonic entities the Fallen Noble had welcomed into his body were released. After a swift and brutal skirmish, these manifestations were similarly cut down, their essences dissipating back to the Warp, but not before they marked each of the Kroot mercenaries with a burning rune.

More than a Terran year later on a distant world the truth of these markings became apparent. A lance of Khomentis Knights attacked the Kroot from out of nowhere, having tracked the burning runes through the Warp to take revenge on their prey.

House Khomentis' heraldry is a daemon head, halved black and white, holding a blank, black-and-white Cog Mechanicum in its mouth. 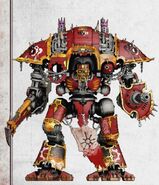 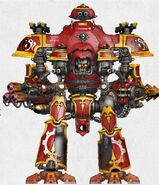 The House Khomentis Knight Tyrant Killing Oath piloted by Abesh
Add a photo to this gallery
Retrieved from "https://warhammer40k.fandom.com/wiki/House_Khomentis?oldid=357396"
Community content is available under CC-BY-SA unless otherwise noted.