House Herpetrax is a Renegade Knight House of Chaos Knights. The Herpetrax are considered an Iconoclast house, and they have served the powers of Chaos for many centuries.

House Herpetrax is one of the few members of the Questor Traitoris to have never served the Imperium of Man in any form, having remained independent since the Age of Technology when their world was first colonised.

Though their homeworld of Jedathra was invaded by an Imperial force in the 36th Millennium, the Chaos Knights' strong connection to the Ruinous Powers provided them the strength to throw back the Imperial troops and maintain their independence.

Since that time, the Chaos Knights of House Herpetrax have proved to be a thorn in the side of the Emperor's realm.

For millennia the Knights of House Herpetrax have been bathed in the fell glow of Warp rifts near their world of Jedathra. The mangled remains of countless envoys lie beneath the planet's surface, buried in crypts known to the Jedathrans as "Wells of Shame."

House Herpetrax is an oddity amongst Knight houses, in that its Nobles never swore allegiance to the Imperium. Their world of Jedathra was not discovered by the ancient Mechanicum's Explorator fleets during the Great Crusade, and the first record of Imperial contact with the house dates to the late 36th Millennium, when the Rogue Trader Cherris Draik was exploring a vast tract of space that had previously been isolated by Warp vortexes.

When envoys from Terra followed in Draik's footsteps, they were met with unequivocal and violent opposition by the Knights of Herpetrax. The Nobles scoffed at the prospect of aligning themselves to the Imperium. Envoys sent to Jedathra were executed and flayed, and upon the raw skins the Nobles penned their scathing refusals.

It was from these grim missives that the Imperial agents were able to glean a portion of House Herpetrax's history. The Jedathrans wrote that during the horrors of Old Night and the long Terran millennia before, they had been approached many times by individuals claiming to be the Emperor of Mankind.

None of these previous claimants had shown equal mettle to the royal lines of Jedathra, and how much less would House Herpetrax pledge themselves to one who now sits as a corpse upon his throne. They decried all claims of the Emperor's sovereignty over Humanity, and in no uncertain terms proclaimed that Mankind would bow at their feet or be exterminated.

The Knight house was immediately declared Iconoclast by the Imperium, and a world-spanning siege launched against Jedathra. Orbital bombardments were initiated against their keeps and castles, followed by ground-based assaults by Astra Militarum armoured and infantry regiments.

But the Herpetrax Knights proved dauntless. Fate also conspired to aid the Fallen Nobles in defending their planet. Strange mutations quickly spread through the invading armies, and Warp vortexes closed in once more around the system.

The final Imperial communique to come from Jedathra was sent by Cherris Draik as she withdrew from the war zone, in which she hinted at the vile history she had uncovered on the planet: there was evidence that the Nobles of Herpetrax had practised profane Chaos rituals and heretical sorceries for millennia.

A century later, the Knights of House Herpetrax marauded through the Kreen Worlds, spreading terror before them and leaving ruin in their wake.

House Herpetrax launched a long and brutal campaign through the Kreen Worlds. Stretching over more than a hundred light years, this network of planetary systems served as a vital manufactorum hub in the galactic south of the Ultima Segmentum.

Despite concerted defence efforts by the Astra Militarum and Adeptus Mechanicus, the Herpetrax advance progressed with staggering speed. The denizens of worlds that were conquered by the Iconoclast house were enslaved, and put to work excavating the foundations beneath the towering hive cities in which they lived.

Billions died in the process, crushed beneath slabs of ferrocrete, buried in catastrophic cave-ins or simply collapsing from starvation and exhaustion. But on several of these planets the Fallen Noble overlords uncovered what they were searching for.

The long-forgotten remains of ancient Long March starships were prised from the earth -- the remnants of failed human colonies from the Dark Age of Technology. These precious cargoes were taken back to the Fallen Knight World of Jedathra, while the surviving slave populations were exterminated by massed orbital bombardments.

Over the course of a generation, the belt of Imperial manufactorum worlds was transformed into a ruined and lifeless stretch known as the "Kreen Scar."

The heraldry of House Herpetrax is a black serpent wearing a crown. 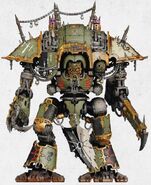 The House Herpetrax Knight Rampager Unflinching Wrath piloted by Dam Bahras
Add a photo to this gallery
Retrieved from "https://warhammer40k.fandom.com/wiki/House_Herpetrax?oldid=362687"
Community content is available under CC-BY-SA unless otherwise noted.