House Hermetika, better known as "The Grand Order of Hermetika," is a Loyalist Imperial Knight House of noble reputation which resides on the planet of Kaldeia and is part of the Questor Mechanicus.

The closeness of their homeworld with the Forge World of Mezoa in the Gothic Sector of the Segmentum Obscurus has naturally led the Knight House to align itself to the Adeptus Mechanicus rather than directly to the Imperium of Man, although House Hermetika's strength and wisdom is such that it has escaped the strict tenures of the Sidon Protocols.

For millennia House Hermetika has remained a faithful ally to the Forge World of Mezoa rather than its vassal.

The secretive leaders of House Hermetika, the self-stylised Hierarchs, are loathe to reveal anything regarding their House's history. What is known is that House Hermetika was likely founded during the Dark Age of Technology, as the Mezoan Forge has acknowledged having fought beside the Knights of House Hermetika throughout the Age of Strife; most notoriously against the vicious xenos of the Mitu Conglomerate which long plagued the region of the Coronid Deeps and was eventually eradicated during the Great Crusade.

In stark contrast to their fellow Knights from other worlds, the Hierarchs form a caste of warrior-monks which place great value on meditative and ascetic practices as well as on more traditional martial virtues.

Kaldeia, not unlike Mezoa, is a volcanic world. However Kaldeia's volcanoes have been long dormant, the receding lava-level having left great underground webs of sulphurous caves. This sulphur is the principal source of the Grand Order's wealth, and the foremost trade-item it offered to its ancient Mechanicum allies. Too powerful to be coerced into submission and yet too reliant on trade with the Tech-priests to stand apart, Kaldeia and Mezoa have entered a state of symbiosis, both worlds being able to provide what the other lacks.

Long standard centuries of exchange have seen both Forge and House grow more alike, with elements of the strange ascetic and meditative practices of the Hermetikan Hierarchs slowly infiltrating the orthodox rites of the Mezoan Tech-priests, while the Hermetikan Sacristans replaced the traditional perfect being of Hermetikan mythology with a distorted interpretation of the Omnissiah.

The military might of the Grand Order of Hermetika is subject to controversy, open records failing to mention the House's strength and the number of Knight Armours readily at its disposal. The House's chronicles state that well over a hundred Knights went to aid their beleaguered ally and that many more stayed on Kaldeia, which would situate House Hermetika among the average Secundus Grade Knight Houses.

However, these accounts fail to take into consideration those Knights turned Questoris or acting in other warzones, such as the famed Liberation of Numinal to which House Hermetika contributed with a full maniple of Knights.

A conservative estimate would therefore place the Grand Order at around 250 Knights of various models. Due to its strong ties with Mezoa prior to the Horus Heresy, it is known that the Hierarchs could boast a high number of the advanced Cerastus Pattern Knights amongst their ranks.

The appearance of House Hermetika remains quite austere despite their abundance of resources and their strong ties to their allied Forge World. This lack of adornments save for those of the House itself and their Mechanicum patrons is perhaps best explained in the dual nature of the Hierarchs as both warriors and monks. In the highly spiritual and often ascetic society of the Hierarchs, such personal and ultimately vainglorious adornments are often assimilated with hubris, a flaw no true Hierarch could possess.

As a result, badges of honour and personal heraldry are often discreet, House Hermetika preferring to prominently proclaim their allegiance to either their patron Forge or the Mechanicum itself. As an ostensible mark of their affiliation to the Mechanicum, all Knights of House Hermetika bear the Opus Machina on the armoured cowl of their mounts.

The emblem of House Hermetika is a simple rune, usually rendered in white, which forms something resembling the ancient Roma letter "H". Given the discreet nature of the House's sigil, it is common for Hermetika's Knights to field the icon of Mezoa -- a burning flame situated in a half-cog with a cog-rimmed star at its center -- in a more prominent manner.

The emblem of the Forge is often borne both upon honour banners and the armour itself. Whenever House Hermetika fights alongside other Mechanicum forces, it is common for the Knights to adorn their pauldron armour with the sacred skull and cog emblem of the Mechanicus.

Having fought alongside the Mezoan Taghmata for many centuries, it became common use amongst the Hierarchs assigned to fight alongside their Mechanicum allies to replace their personal heraldry with the emblems of the Sidon Protocols or that of the Forge, the sacred Opus Machina proving particularly popular in this. This was the case during the Siege of Mezoa, where numerous records show Knights bearing nearly no personal heraldry at all or a simple name engraved upon the dorsal plating.

When present, personal heraldry proves both plain and discreet and is usually relegated to honour banners. Kill markings are common and borne on the responsible weapon's arm. Tradition demands that the honour banner be adorned with selected extracts from the Hierarch's holy tome, the Hierarch's Litany, which usually accompany the House's sigil and personal heraldry. These strict heraldic rules guarantee that the most prominent signs on a Hermetika Knight's armour will always be those of the Mechanicum and the Sidon Protocols.

Grand Order of Hermetika Honour Banner of Crucible of Enlightenment 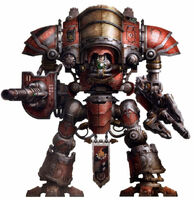 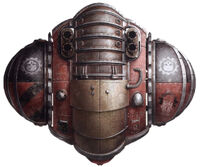 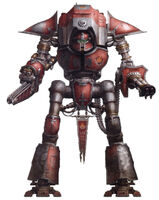 Grand Order of Hermetika Cerastus Knight-Lancer in battle during the Horus Heresy
Add a photo to this gallery
Retrieved from "https://warhammer40k.fandom.com/wiki/House_Hermetika?oldid=348847"
Community content is available under CC-BY-SA unless otherwise noted.