Purple and White
House Beaumaris is an Imperial Knight House of the Questor Mechanicus that has sworn fealty to the Adeptus Mechanicus. There is very little information in Imperial records about this Knight House, and it is unknown from which Knight World it hails.

The colours of House Beaumaris are purple and white.

The arms of House Beaumaris are a green dragon head on a field of white.

This Knight House appears in the outdated 126th issue of the UK edition of White Dwarf magazine, and the images presented here do not mesh with existing canon. The Knight shown above possesses armament characteristic to a Knight Errant, but since this type did not exist in this old version, it was called a Knight Paladin. Likewise, the hunched model in the gallery below is also a Knight Paladin, although Knights using such a chassis do not exist in the current incarnations of the Knight combat walkers. 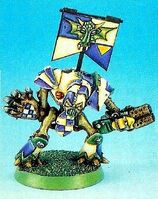 A Knight Errant of House Beaumaris 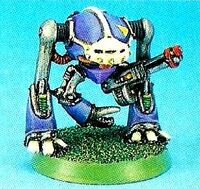 A Squire of House Beaumaris