"A foe without honour is a foe already beaten."

An Astartes Honour Guard is an elite cadre of Veteran Space Marines who have given many Terran centuries of exceptionally courageous service to their Chapter. Every member of an Honour Guard is a living exemplar of the ideals for which the Emperor of Mankind and the Primarchs intended the Space Marines to be forever known.

These taciturn and solemn individuals are ferocious and unyielding in the heat of battle. On the battlefield they serve as their Chapter Master's personal retinue, responsible for the safety of their commander and carrying the Chapter's sacred battle standard into battle.

Having performed deeds that lesser men could only dream of, each member of a Chapter's Honour Guard has received the very highest honours and accolades that his brother Space Marines can bestow. Indeed, it is often said that the most ancient individuals in a Chapter's Honour Guard have slain more foes over the centuries than a regiment of Imperial Guardsmen will have done in its whole existence.

Perhaps more impressive though, are the deeds of a few specific Honour Guards, such as those listed in the Record of Heroes within the Ultramarines' fortress-monastery on Macragge, who have won more victories in their service than a whole company of other Space Marines -- names which are held in reverence by all the sons of Roboute Guilliman.

Most Space Marine Chapters have only a handful of Honour Guard, enough to form a distinct and capable fighting unit, but no more. A few Chapters can muster as many as two-dozen Honour Guards, but it is a rare and terrible day when they all fight as one. So steeped in the trade of battle and blood are the members of the Honour Guard that their accumulated insights and understanding of warfare commonly outstrips even the experience of the Chapter's Captains.

They rarely give unsolicited advice, for to do so is to risk undermining their commander's authority, yet such restraint serves only to lend gravitas to an Honour Guard's words. It is considered folly for even the Master of the Chapter -- though he be a noble and peerless warrior of several centuries' standing -- to ignore the solemn counsel of his Honour Guard.

An Honour Guard's wargear is drawn from amongst the most ancient and venerated relics of the Chapter, so the Honour Guard enter the fray clad in ornate suits of Artificer Armour and wielding master-crafted Astartes weapons that have seen battle in the hands of a thousand great heroes. The perfect weapon, wedded to the perfect warrior, creates a force that only the boldest or most terrifying foes can hope to stand against.

In battle, the Honour Guard commonly act as the Chapter Master's personal retinue, responsible for the safety of their commander and hoisting aloft the Chapter's battle standard. These are sacred tasks, and the Honour Guard fight for both with stern fury, without ever succumbing to doubt or allowing rage to subvert their actions.

Such courage and devotion has been the salvation of more than one Chapter Master's life and turned the tide of countless battles. Accordingly, when an Honour Guard is slain, his companions fight all the harder in order that his mortal shell can be recovered, his gene-seed extracted to cement his legacy and his body laid to rest in the Chapter's Vault of Heroes.

Always at the forefront of a Chapter's Honour Guard is the Chapter Champion. This superlative duellist is ready to challenge any enemy leader to single combat in his commander's stead, and all his training is bent to this goal.

It was common in the days of the Great Crusade for each Primarch of the Space Marine Legions to maintain an elite cadre of Astartes from their Legion to serve as their personal honour guard. These honour guards generally represented the most elite Battle-Brothers of the Legion they were drawn from and were exemplars of the culture and traits that their particular Legion most embodied.

Pre-Heresy image of Barris Kal'sho of the Salamanders Legion, one of the seven Space Marines who served as a Pyre Guard, the honour guard of the Primarch Vulkan 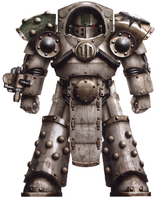 A Word Bearers Gal Vorbak -- a Tactical Marine of the Serrated Suns Chapter's 7th Assault Company wearing Mark IV Power Armour; note that this warrior has repainted his armour "Traitor's Red" from grey, inscribed it with passages from the Book of Lorgar in Colchisian runes and defaced the old icon of the XVII Legion, transforming it into the profane Latros Sacrum