"Yes, we could unite the paupers and the scribes, the factotums and the habworkers easily enough. They too have their uses. But an uprising recruited from those with ready access to military-grade weaponry? That will triumph far more easily than one recruited from the common folk. Keep your toothless herd. The blessed union of gun, claw and merciless intent is a force to be truly feared."

The Hivecult is a Genestealer Cult that can be found across many worlds in Imperial space, though it originated on the Hive World of New Gidlam. It has spread across the Segmentum Solar in recent decades. Its leaders are particularly interested in infiltrating Imperial military units to make their expected uprisings much easier.

The Hivecult are militant, organised and hierarchical. They infiltrate not only the criminal underworlds and hive city gangs of their host planets, but also the Astra Militarum regiments that recruit from them. To the Hivecult, it is a divine duty to be armed and dangerous.

The Hivecult's leaders prioritise warriors amongst their recruits, regardless of their provenance. Their logic is sound, for should a convert have access to a sword, a gun -- or even better, a tank -- their contribution to the uprising will be all the more formidable on the day of ascension. If the entire cult is so armed and armoured with the finest weapons the Imperium of Man -- and its black market -- can provide, it will overcome all before it in a spectacular surge of violence. Each gun stolen from its official home is worth two on the day of insurrection.

The genesis infestation of the Hivecult is a prime example of a Genestealer infection that spread like wildfire across a densely populated Imperial planet. That planet is New Gidlam, a Hive World that has thirteen ancient hive cities upon its pollution-blasted surface.

Each of these vast, man-made mountains harbours tens of billions of souls, and all bar one has been conquered by the Hivecult. Only Hive Tharanex holds out, its lessons learnt at the expense of every other population centre. Even then its lower levels are constantly besieged, and its future looks bleak indeed.

The cult's emergence on New Gidlam began with a spate of ritual killings. A warlike underhive family had sprung up around a brood of Purestrain Genestealers. These xenos specimens were originally purchased from a self-appointed "xeno-tzar" known as Deinosis the Great Curator. They were later smuggled into the hive city by furtive gangers looking for a secret weapon to use against their enemies.

Brought swiftly into the sway of the Genestealer they called the "First Father," the gangers went on the warpath, and soon surpassed their rivals. Rather than the traditional route of infiltrating, kidnapping, blackmailing and stealing from their enemies to grow slowly in the darkness, the cultists went straight for the throat.

They slaughtered one rival gang after another, taking over large swathes of the area known as the Sump. The more dominant gangs that had established themselves in these lower levels saw what was happening and eventually put aside their differences to defend against the Hivecult, but faced with the First Father and his sharp-eyed Genestealers, who could squeeze through narrow pipes and swim across lakes of toxic spill to attack from unexpected angles, the gangers were overmatched.

In the meantime, the aristocracy of the hive city had also been infected by the cult's savage ambition. Its Magus, Vockor Mai, was at the centre of this operation. He brought the ruling dynasties into line one by one, swaying them with his psychic influence and uncanny charisma. There was one, however -- a rich hiver named Thorne who habitually wore a helm of xenos design -- who did not fall to his wiles. In the hours of darkness, Vockor Mai shucked off his robes and assassinated Thorne whilst he was in his bathhouse, cutting the dignitary's throat with the razor-sharp symbol of the cult and leaving it as his calling card.

It was the first of many such kills, each part of a wider initiative to remove obstacles from Mai's path. Though often half seen in the darkness, he was never caught.

With those first acts of killing, the urban myth of the "White Creeper" was born amongst New Gidlam's aristocrats. When the cult grew large enough to spawn the Neophyte Hybrid assassin known as a Sanctus, Vockor Mai bade the operative to go into the hive spires and kill those too intractable -- or too psychically powerful -- to fall to his wiles.

The legend of the White Creeper grew, and spread from hive to hive, though in truth it was several individuals working in concert. Over time, gene-sects were established in twelve of the thirteen ancient hive cities -- but the spread of the cult did not stop there.

New Gidlam's principal human exports -- skilled roachworm silkers and recruits for the Astra Militarum -- spread the infection of the Hivecult from the outer worlds of the Segmentum Solar to its heartlands. With many Imperial Guard regiments recruiting from the gangers of those worlds, the Hivecult spread ever further.

Hidden gang signs and electoos worn under the skin enabled those who owed allegiance to the New Gidlam dynasty to identify one another in secret, and spread their creed in the endless solar hours of inactivity that typified life between engagements for an Astra Militarum unit. The sheer vastness of the Astra Militarum -- and the desperate intensity of the wars they fought -- helped the Hivecult to evade the suspicions of the Commissariat in nearly every conflict zone they infiltrated.

Those who owed secret allegiance to the Hivecult made for focused, disciplined Imperial soldiers -- albeit on the strange side -- but none looked too deeply into their history, for the lords of the Astra Militarum care little about the native cultures from which their foot soldiers hail.

With the Imperial Guard boasting a thousand different ethnicities, colours and variant Imperial Creeds amongst its number, it proved easy enough for the cult's Neophyte Hybrids and Brood Brothers to further their organisation's wider agenda in secret.

When the Hivecult carry out an insurrection on a world, many of the in-system Astra Militarum regiments sent to put down the uprising have thousands of members bearing the wyrm-form upon their skin. These agents of the cult betray their regiments from within, and with armoured squadrons and even super-heavy tanks turning to fight alongside the rising tide of the underworld, the Imperial Guard tasked with restoring order are often overcome in a matter of a few bloody days.

Those forces of the Adepta Sororitas and Adeptus Astartes fighting alongside them find themselves suddenly betrayed -- and with that betrayal a long time in the planning, it is usually as lethal as it is sudden.

The Hivecult's chillingly efficient manner of taking over territory has proved incredibly effective time and time again. Coordinated by gifted Nexos strategists who marshall and distribute their faithful with military precision, they have endless ranks of soldiery marching to the beat of the First Father's drum. They have unparalleled access to warships, aerial assets and methods of reaching the battle zones in which they flourish.

More than that, with thousands of infected gangers working in the lower levels of Imperial metropolises to undermine the planets from the bottom up, they can attack society at every level simultaneously. Some whisper that the Sol System itself has come under threat by the Hivecult, for reports of their presence in Segmentum Solar are becoming ever more common.

The icon of the bladed wyrm-form is carried by all of the Hivecult's members, whether they be the Brood Brothers of New Gidlam's Astra Militarum regiments or the infected hive gangs themselves. So militarised is the cult that the icons themselves are weaponised, appearing in stylised form as knuckle dusters, throwing stars or daggers. They are often used to slay those who stand in the cult's way, an act rich in symbolism that harks back to the "blue-blood kills" first started by the Magus Vockor Mai. 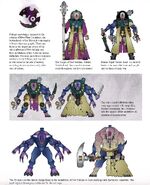 A look at the primary units of the Hive Cult, whose colouration may unwittingly ape that of Hive Fleet Leviathan. 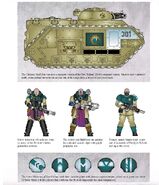 These Hivecult members made up the New Gidlam 233rd Regiment of the Astra Militarum; note the Chimera Void's Bite, the unit was wiped out in the cult's failed uprising on New Gidlam
Add a photo to this gallery
Retrieved from "https://warhammer40k.fandom.com/wiki/Hivecult?oldid=345465"
Community content is available under CC-BY-SA unless otherwise noted.