"And I looked upon the great hive beast, and knew that hope was lost."


— attributed to Hector Prime, commander of the Tower of Adamant, Hethgard, executed for cowardice

A Hive Tyrant (Tyranicus praefactor) is the massive Tyranid bioform that serves as the main battlefield commander of a Tyranid swarm, a synapse creature that stands above the rank and file Tyranids.

They wield potent psychic powers but are unaffected by the Daemons of the Warp, a condition that would indicate a lack of a soul at the individual level for most Tyranids.

However, the species' gestalt consciousness brings into being a truly potent psychic presence in the Immaterium called the Tyranid "Shadow in the Warp" which is produced by the collective Tyranid Hive Mind.

Hive Tyrants serve as the commanders of all the Tyranid forces deployed on a given battlefield, for they share a special synaptic link to the Hive Mind. This link makes a Hive Tyrant one of the most important of the Tyranid synapse creatures.

Though individuals display a wide variety of physical characteristics, all Hive Tyrants are fearsome hulking monsters that tower over even a Dreadnought. Like the other Tyranids, they seem to mutate incredibly fast. Unlike the others, the Hive Tyrant evolves from a completely different type of genus, which covers their bodies with hard carapaces.

Hive Tyrants are highly psychic, and their relationship to the Hive Mind is amongst the closest of any known bioform. Indeed, the synaptic link is so strong that they are the primary conduits through which the Hive Mind enforces its dominance over a hive fleet's lesser creatures.

The instinctive nature of a Tyranid swarm is smothered with implacable drive and purpose, and the need to hunt and devour is imbued with a cunning and tactical awareness that would put the galaxy's finest strategists to shame.

Hive Tyrants were created not only to overpower their prey, but also to outthink it. Unlike many Tyranid creatures, Hive Tyrants are incredibly intelligent and are even, to some extent, self-aware.

Whilst they are still slaved to the gestalt consciousness of the Hive Mind, they are given wider latitude in achieving its goals. As such, they can respond to battlefield events far faster than the inscrutable Hive Mind and adapt the behaviour of the swarms they command accordingly.

As a result of their highly developed synaptic connection and greater levels of intelligence, Hive Tyrants are also able to manifest potent psychic powers. By harnessing tiny slivers of the Hive Mind's terrifying will, Hive Tyrants can invigorate the swarm, shatter their foe's morale or shred the minds of their prey.

Hive Tyrants embody the Tyranid Hive Mind completely, but their destruction does not in any way diminish it. Death is simply another learning experience that gives insight to the prey's strengths and weaknesses. This goes some way to explain why the Tyranids can rarely be defeated the same way twice.

Should a Hive Tyrant be slain on the battlefield, the Hive Mind simply grows a replacement, imbuing it with the same knowledge as its predecessor. Fortunately for the rest of the galaxy, this does not lead to infallibility of purpose.

Even the most fearsome Hive Tyrant cannot anticipate its prey's every ploy, nor can it oversee every quarter of the battlefield. However, the Hive Mind's capacity to regrow its fallen leaders does render each Hive Tyrant practically immortal. No matter how many times a Hive Tyrant is killed, sooner or later it will always come back to overcome and devour its prey.

Should the Hive Mind require it, Hive Tyrants can also be adapted to possess a pair of vast, leathery wings. Winged Hive Tyrants dominate the skies above a battlefield, swooping low to disembowel enemy commanders with a lash of their prehensile tails, or unleashing torrents of flesh-melting energy from monstrous bio-cannons.

While such organisms may lack the speed of fighter aircraft, they are perfectly capable of smashing an unaware pilot out of the sky with their bladed hooves, sending burning fragments of his vessel raining onto the ground below.

Some Hive Tyrants are seen carrying organism-like weapons that spit out large balls of bio-plasma. Apart from their advanced long-ranged weapons, their blood is also known to be extremely acidic, which they sometimes use as a type of weapon. When fighting up close, most of the Hive Tyrants use their claws and even lash-like weapons to smash away the enemies.

A Hive Tyrant looming over the battlefield.

A Hive Tyrant armed with a bio-weapon.

A Hive Tyrant directing a Tyranid Brood in battle. 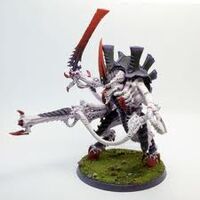 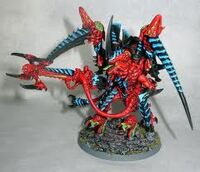 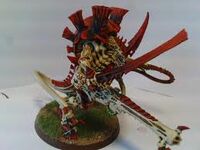 A Hive Tyrant of Hive Fleet Leviathan leading a army of Tyranids.
Español
Community content is available under CC-BY-SA unless otherwise noted.
Advertisement