The Hierophant (Tyranicus giganticus) is the most commonly deployed strain of Tyranid Bio-Titan, the organic equivalent of the massive war engines often called Titans that are employed by the Imperium of Man and the other intelligent starfaring species of the Milky Way Galaxy. Hierophants are immense, hideous creatures, towering over any opponents and bristling with spines, tendrils and Tyranid symbiote weapons. They are amongst the largest Tyranid bioforms yet encountered by the Imperium amongst the teeming swarms of the Hive Fleets, comparable in size and power to an Imperial Titan.

A brood of Hierophants are likely to be at the forefront of a major Tyranid planetary assault -- striding forward, drawing the enemy's heavy weapons fire away from the lesser Tyranid species, absorbing tremendous amounts of firepower before smashing into the enemy line with devastating force. The Hierophant is the Tyranid Hive Mind's largest bioform adapted for shock assault tactics, and it is armed with powerful Bio-Cannons, multiple claws and razor-sharp blades. The Hierophant is armoured with a thick chitinous hide that exudes poisonous spores from rends in the plates.

As well as the claws and toxic spines which cover its body, the Hierophant is also armed with two Bio-Cannons. These symbiote weapons are triggered by a massive electro-chemical shock released by the host creature, which causes them to spew forth a hail of corrosive maggot-like organisms. These venomous and highly acidic creatures impact upon the target, splattering gobbets of bio-acid and poison that melt through Plasteel, Ferrocrete, flesh and bone in seconds, reducing the unfortunate victim to a steaming pile of bubbling goo.

Besides its main weapons, the creature's vulnerable belly is protected by many spiny tendrils that lash out in all directions to entangle enemies which get too close. These so-called Lash Whips are also Tyranid symbiote creatures, living ropes of muscle and sinew which can entangle, bind and strangle as if with a will of their own. The Hierophant also has one last line of defence. From rends in its armour plates and body the Hierophant constantly exudes a cloud of highly toxic poisonous spores. These are lethal to all non-Tyranid creatures, forming a drifting vapour about the Hierophant that chokes and burns the lungs of anyone without the proper protection that is brave enough to get close to the monstrous Bio-Titan.

Like all Tyranid species, this Bio-Titan seems to be able to mutate rapidly, evolving new weapons and defences as required. Other strains of the Hierophant Bio-Titan have been identified with massive claws adapted for crushing armoured vehicles or long scythe-like blades, cluster spines and other bio-weapons intended for close combat. The genetic process through which the Tyranid Norn-Queens developed such unusually large biological constructs remains a mystery to the Adeptus Mechanicus' Magos Biologis. Whilst it seems that a Hive Tyrant or Carnifex could easily be a further adaptation of the basic genome and body plan of a Tyranid Warrior, no other known Tyranid bioforms are a logical precursor for this Bio-Titan.

Combating a Bio-Titan like the Hierophant is simply a matter of applying the heaviest firepower available; large ordnance weapons and heavy artillery have so far proved the only effective weapons for Imperial forces in destroying the hideous Tyranid Bio-Titans.

Known Genus Mutations: Other genus of Hierophants include symbiote weapon variations such as Scything Claws and Cluster Spines.

Notes: The Hierophant is among the largest Tyranid bioforms ever encountered by the Imperium. It exudes a toxic spore cloud that makes it difficult for Imperial units to engage with the creature in close combat. Appropriate measures should be taken. 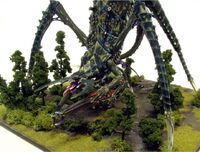 A Tyranid Hierophant stalking across the battlefield

A Tyranid Hierophant Bio-Titan moves through the forest

A lone tank faces off against a Hierophant Bio-Titan
Add a photo to this gallery
Retrieved from "https://warhammer40k.fandom.com/wiki/Hierophant?oldid=337996"
Community content is available under CC-BY-SA unless otherwise noted.