"BLOOD FOR THE BLOOD GOD! SKULLS FOR THE SKULL THRONE!"

A Herald of Khorne is an elite form of Bloodletter, a Lesser Daemon of Khorne. Leading the cohorts of the daemonic Blood Legions are the Heralds of Khorne, leering visions of damnation brought to life.

Whether marching at the head of the daemonic warriors they lead, or riding to war atop a Juggernaut, the daemons of Khorne fight all the harder in their presence.

The Heralds of Khorne are the strongest and most brutal of the Bloodletters, chosen from the ranks of their brethren by the Blood God himself. It is said that upon selection they are set against other aspiring Heralds in a vast arena of the Brass Citadel in the Realm of Chaos known as the Skullpit, forced to participate in a contest of champions to wean out the undeserving.

The energies of those who fall are reclaimed by Khorne and given to those that remain. Thus the victor becomes swollen with power, and their Hellblade, having leeched a measure of this new strength, becomes known henceforth as a Blade of Blood. Its wielder too is given a title, one that befits their achievements and preferred method of warfare.

Whether a Bloodmaster, Skullmaster, Sacred Executioner, Rendmaster or any other type of Herald, each is a ferocious warrior, and leads the Khornate daemon packs beneath them to enact the will of their ruling Bloodthirster.

"Heed me, wretches, for thy doom cometh. All who pass before my gaze shall die in offering to Khorne. But before the slaughter begins, I bid thee all to fight – to strain thine utmost against us in glorious combat. While all thy skulls shall be taken for the almighty, those who die on their feet may yet find the Blood God’s favour. Thou may think the manner in which thy lifeblood runs out meaningless, but I can assure thee that a coward’s suffering shall never end – never! So raise whatever weapons thou can muster and hope that thy feeble offering is worthy. I relish the carnage that shall be… now, my Crimson Cohort, begin! Let the blood flow!"


—Kzar'tark, Bloodmaster of the Crimson Cohort, before the epic slaughter of the hive city of Skyreen

Those Heralds who have performed particularly noteworthy acts of violence are given the title of Bloodmaster. Rampaging masters of combat, each delights in decapitating their prey and plunging their wailing Blade of Blood deep into the beating hearts of their enemies.

A Bloodmaster cannot simply give in to its desire for slaughter, however, for the Herald's primary role on the battlefield is as a director of the massacre. To this end, these daemonic champions imbue the daemons of the cohort they lead with a portion of their own eternal malice, heightening the inherent bloodlust of the minions of Khorne to fever pitch.

There are those amongst the Heralds of Khorne that favour the headlong charge of daemonic cavalry, that relish the sensation of skulls shattering beneath brazen hooves, and will thunder into the thick of battle to seek out the worthiest opponents.

These champions are known as Skullmasters, and are forces of utter devastation on the battlefield. Mounted atop a Juggernaut -- a steed of living brass and boiling blood -- a Skullmaster is most often found in Khorne's daemonic armies leading a cohort of a Brazen Thunder Legion, and in battle is always at the forefront of a Bloodcrusher cavalry charge.

What foes their daemonic mount does not gore or crush underfoot are quickly dispatched by the Skullmaster's blade of blood, which lashes out with spiteful ferocity.

A Rendmaster is a Herald of Khorne who stands so high in the favour of the Blood God that they have been granted the right to ride atop a Blood Throne of Khorne.

From atop his macabre perch, the Herald searches for those foes whose plundered skulls will make the most audacious offerings to the Blood God. Then the Herald spurs his Blood Throne forward, howling with unspeakable joy as he readies his Hellblade for the kill.

When the Blood Throne arrives at the enemy lines, the hurtling mass of brass and spikes ploughs through entire formations, leaving only mangled flesh behind.

The two standard Bloodletters and the Rendmaster atop the hellish engine are well practised at hacking down those that survive the impact.

A Sacred Executioner is a special kind of Herald of Khorne who ranks among the most highly favoured and powerful of the Blood God's daemonic servants.

Many of the skulls taken as trophies by these Daemons are given over to Khorne itself in the Realm of Chaos for display within the Brass Citadel or are incorporated into the Skull Throne itself.

The most well-known of the Sacred Executioners is U'Zuhl, better known across the galaxy simply as Skulltaker. 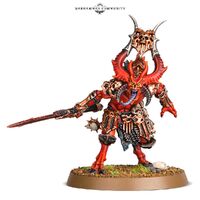 A Bloodmaster upon the field of battle.

A Skullmaster atop his Juggernaut steed.
Community content is available under CC-BY-SA unless otherwise noted.
Advertisement