The Hellmaw Cannon is a large Flamer weapon that is used by Brass Scorpion Daemon Engines. The Brass Scorpion is armed with a set of twin-linked Hellmaw Cannons which are mounted on the underside of the beast, located just beneath its Demolisher Cannon. The weapons spray infernal Warp-fed fire and molten brass, and are used as assault weapons during sieges, where they are fired into buildings that have been damaged by the creature's large claws. The weapons are perfectly suited to the Brass Scorpion's role as an assault vehicle, allowing it to saturate enemy trench lines and tunnels with screaming Warpfire and fire the weapons into damaged buildings to force garrisoned enemy infantry out into the open. 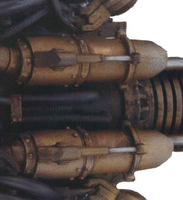 The Brass Scorpion's twin-linked Hellmaw Cannons as seen from below
Add a photo to this gallery
Retrieved from "https://warhammer40k.fandom.com/wiki/Hellmaw_Cannon?oldid=153378"
Community content is available under CC-BY-SA unless otherwise noted.