"We are Hellions! Lords of flying death!"

Hellions are Dark Eldar miscreants. Their numbers include aspirants not yet old enough to be chosen asKabalite Warriors, those who have been exiled by their Archons and those who have rejected life in a Kabal in favour of one of continued autonomy, beholden to none. Packs of Hellions haunt the desolate regions of the Dark City, surviving through the use of their wits and taking pride in the scars they earn in the course of their savage lives. Hellions gather together into large gangs to better ensure their survival, some of which can be as large as a lesser Kabal. Hellion gangs often have fierce rivalries between themselves and with the Reavers and Scourges of the upper levels, for they resent above all those who flaunt their privilege and status. Though a Hellion in his typical bravado might outwardly claim that he lives as he does for the terror and anarchy he can spread on the mean streets of the Dark City, like all Dark Eldar each Hellion secretly burns with ambition to become a power in the city in his own right. 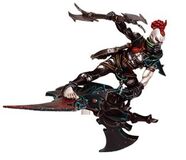 A Dark Eldar Heliarch
Add a photo to this gallery
Retrieved from "https://warhammer40k.fandom.com/wiki/Hellion?oldid=123170"
Community content is available under CC-BY-SA unless otherwise noted.