— Lasko Pyre, The Annals of Terror

The tortured skies of Commorragh are warzones as perilous as its xenos-riddled ghettos and its noble-ruled spires. Through the mists soar arrogant lords and winged hunters seeking the next kill. The most savage of these airborne horrors are the Hellions, gangs of feral Drukhari who descend upon their prey in a flurry of blades before soaring away, safely out of reach.

Hellions are Drukhari miscreants. Their numbers include aspirants not yet old enough to be chosen as Kabalite Warriors, those who have been exiled by their Archons and those who have rejected life in a Kabal in favour of one of continued autonomy, beholden to none. Packs of Hellions haunt the desolate regions of the Dark City, surviving through the use of their wits and taking pride in the scars they earn in the course of their savage lives.

Hellions gather together into large gangs to better ensure their survival, some of which can be as large as a lesser Kabal. Hellion gangs often have fierce rivalries between themselves and with the Reavers and Scourges of the upper levels, for they resent above all those who flaunt their privilege and status. Though a Hellion in his typical bravado might outwardly claim that he lives as he does for the terror and anarchy he can spread on the mean streets of the Dark City, like all Drukhari each Hellion secretly burns with ambition to become a power in the city in his own right.

Each Hellglaive is viciously sharp, and it is common practice for Hellions to call out beforehand a particular part of the body of a foe that they intend to cut off on the next pass of their Skyboard. Such is their skill with the blades that a swarm of Hellions can fall upon a squad of enemy soldiers and lop off limbs and heads before scattering once more, while a single chosen victim is carried aloft into the sky to be cut apart at the Hellions' leisure.

"Heliarch" is the title given to the warrior who leads a Hellion gang to anarchy and battle in the Dark City of Commorragh and on raids into realspace. A Heliarch is usually the strongest warrior and most skilled Skyboard rider in his gang and he possesses the finest weapons and the best wargear of any Hellion in the gang. 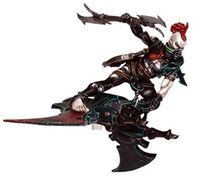 Idris Cwn'Anwn, Drukhari Hellion Mercenary
Add a photo to this gallery
Retrieved from "https://warhammer40k.fandom.com/wiki/Hellion?oldid=364017"
Community content is available under CC-BY-SA unless otherwise noted.