A Hellgun, also called a Hot-shot Lasgun, is a pattern of Imperial Lasgun that possesses a more advanced and powerful laser generation system intended to provide more potent laser fire on-target. This makes the Hellgun superior in both range and power output compared to the standard-issue Lasgun. However, the higher power output requires superior quality power cells or the use of a separate backpack power supply, and the more complex inner workings of the weapon require more time and resources to manufacture than the standard Lasgun. This makes it more costly to field and so it is not generally issued to the average soldier of most Astra Militarum regiments. However, Tempestus Scions and other Storm Trooper equivalents, including Cadian Kasrkin and Astra Militarum Grenadiers, are always equipped with a Hellgun as a standard weapon to take full advantage of their superior training and weapons expertise.

Imperial Guard Storm Troopers normally wear a large backpack which contains the separate power source required to provide the increased damage output for both Hellpistols and Hellguns. Like the standard Lasgun, the Hellgun can operate in either a semi-automatic mode, where it fires one shot per trigger pull, or as a fully automatic weapon in which it unleashes a continuous stream of laser fire for as long as the weapon's trigger is depressed. The Hellgun shares the same technology used in the Hellpistol. The standard pattern of Hellgun currently used in the Imperial Guard is the Hellgun Mark II, which is gyro-stabilised and requires the use of the backpack-mounted power source to be effective.

All Storm Trooper units issued these weapons are also regularly supplied with a large amount of replacement parts, as the weapon is so powerful that its components often burn out under the stress of its use. Among their other skills, Storm Troopers are trained to repair and maintain all of their weapons and are even capable of building their arms from scratch if the requisite components are made available. Hellguns are considered the property of the Departmento Munitorum, which rarely entrusts them to any Imperial Guard units that are not designated as elite Storm Troopers.

Hellguns require multiple advanced components in their construction, including reinforced alloy barrels to withstand the greater heat produced during firing, thermal cooling cells to prevent the weapons from overheating, and gyro-stabilised power packs. As such, only a small number of Forge Worlds in the Imperium possess the technological know-how or requisite materiel to produce these potent weapons.

An Inqusitorial Storm Trooper armed with a Hellgun 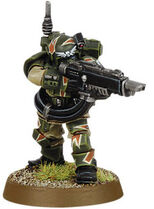 A Cadian Kasrkin armed with a Hellgun
Add a photo to this gallery
Retrieved from "https://warhammer40k.fandom.com/wiki/Hellgun?oldid=312850"
Community content is available under CC-BY-SA unless otherwise noted.