A Hellblaster, who is usually part of a Hellblaster Squad, is a Primaris Space Marine who is intended to serve alongside his brethren in the role of heavy fire support. Hellblaster Squads are armed with Mark III Belisarius Pattern Plasma Incinerators.

They serve a similar combat function as the Legion Tactical Support Squads of the ancient Space Marine Legions and to present-day Devastator Squads found among Firstborn Astartes.

The Space Marines in a Chapter's fire support squads have a vital role, for they provide covering fire to their battleline and close support brethren.

This could be in the form of assassination of prime targets, counter-battery volleys, or the destruction of enemy armour. By their target selection, marksmanship, and the timely application of firepower are countless battles won.

Imperial observers have likened the fire of a Hellblaster Squad to the incinerating power of a stellar flare. Bolt after bolt of plasma sears across the battlefield; those caught in the Hellblasters' sights are swiftly annihilated, their armour blasted to ash and their flesh and bone to glowing motes.

Even armoured fighting vehicles are swiftly reduced to glowing heaps of metallic slag. Deployed at the correct point and time, a single Hellblaster Squad can blunt the thundering assault of an armoured spearhead, or lay low even the most titanic alien fiend.

Harking back to the single-armament specialisations of the ancient Space Marine Legions, these squads are nonetheless strategically versatile. The various types of Plasma Incinerators carried by Hellblasters are light enough to be fired on the move, while still retaining the damage capacity to drop a rampaging Hive Tyrant or Ork Battlewagon with sustained fire.

The only limiting factor on the usefulness of these squads is the comparative scarcity -- and potential instability -- of their Plasma Weapons. As such, Hellblaster Squads comprise the finest marksmen each company can provide, and will only resort to supercharging their Plasma Incinerators in truly dire circumstances.

They are not afraid to do so, however, and more than one squad has martyred itself in battle, turning the tide at the cost of their own immolation. Yet for every warrior to suffer such a fiery death, there is another that obliterates its foes amidst searing tempests of star-born nuclear fury. 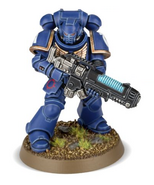