The Hell Talon is a fighter-bomber that is used by the forces of Chaos, and is a relatively recent addition to their arsenal.

The Hell Talon, like the Hell Blade air superiority fighter, is another product of the malevolent masters of the damned Forge World of Xana II located deep within the Eye of Terror. It is believed that the Hell Talon was either developed as a variant of the Hell Blade or was designed alongside the Hell Blade using the same process as they are extremely similar in design.

The Hell Talon was designed to replace the aging Doomfire bomber formerly used by the forces of Chaos as their primary bomber craft. The Hell Talon fighter-bomber represents one of the most resounding technological successes of the Dark Mechanicum; it is a sleek and deadly dagger-shaped aircraft held aloft by vector-thrusting jet engines which make it incredibly fast and impressively nimble.

The Hell Talon is a swift and ruthless killer both in the atmosphere of a planet and in the void of space. The aircraft is capable of reaching speeds up to and above 2,200 kilometres per hour in a standard atmosphere, and features maneuverability that far exceeds any comparable Imperial design at these speeds.

The Hell Talon's effectiveness in its role as a fighter-bomber is enhanced by its advanced flight systems and its arcane design, enabling it to perform strafing runs and ground attacks both at great speeds and at very low altitudes, while performing maneuvers far beyond the physical limit of normal human pilots.

The Hell Talon is such a potent craft both within a planet's atmosphere and during void operations that it has been quickly adopted by all the forces of Chaos, from the massive warfleets of the Chaos Space Marines and Chaos pirate fleets to the more "independent" Chaos militias such as the Blood Pact.

Much like the Hell Blade interceptor, the Hell Talon originates from the hellish Forge World of Xana II, located deep within theEye of Terror. The planet is said to be a stronghold of the Dark Mechanicum, also known sometimes as the "Dark Priesthood" or the "Hellsmiths." Xana II is believed to be a world that is wholly given over to Daemon Engines and infernal industries, where mills grind flesh and suffering to make the insane visions of its nightmarish masters real.

Countless millions are enslaved to toil endlessly in a world-spanning network of labyrinthine forges, churning out an infinite supply of weapons and armaments for the Traitor Legions' Long War. The masters of Xana II, said to be half-daemon machines themselves, have long since left the shreds of their humanity behind and are beholden to no one, be they mortal or Chaos God.

They are willing to sell or barter their unholy inventions and arms to the highest bidder, be they warlord, demagogue, Chaos Sorcerer or Daemon Prince without favour, and their coin of exchange is always the same: raw materials and the flesh of new slaves to feed Xana's endless hunger.

The Imperium remains in ignorance of much of the technology and design that has gone into the creation of the Hell Talon and the other Chaos aircraft of the dreaded Xana II lineage. This is in no small part the result of the frequently spectacular immolation and disintegration the aircraft undergoes when destroyed, a factor that some attribute to the escape of Warp forces from their bindings when the machine is destroyed.

The Hell Talon is designed as a fighter-bomber; it is intended to provide air support to the other elements of a Chaos force and is capable of operating in the atmosphere and in the void of space. The craft is armed with a set of fuselage-mounted twin-linked Lascannons for precision shooting, a single Autocannon for engaging in dogfights and up to eight missile or bomb hard points located on the craft's ventral surface, allowing the Hell Talon to pack a mean punch.

When the aircraft is intended to assault enemy infantry it will have the Autocannon swapped out for a Havoc Missile Launcher. Whether the aircraft is escorting a squadron of Harbinger super-heavy bombers or operating in an independent interceptor or ground attack squadron, it is quite capable of pounding ground defences into slag and opening the way for the Chaos invaders on the ground.

When equipped with heat-seeking Krak Missiles, its impressive speed and nimbleness makes for a potent dogfighter. The Hell Talon's main drawback is that the fighter-bomber is a jack-of-all-trades, but a master of none.

For all its speed and manoeuvrability, the Hell Talon lacks the efficiency of the Hell Blade as a dedicated interceptor, and its relatively light payload, which is only half that of its Imperial Marauder counterpart, makes it only an average dedicated bomber. And yet, this versatility is also the Hell Talon's greatest strength, for a Chaos Lord who decides to field Hell Talons will perhaps not have the best tool for a given task, but will have an efficient one in any almost given situation requiring air support for his ground forces.

The Hell Talon's normal crew consists of three hardwired Servitors; one acting as pilot and two as weapon operators. However, reports from the squadrons of the Imperial Phantine Air Corps on the planet of Enothis in the Sabbat Worlds Sector state that the elite squadrons of opposing Hell Talons they faced were flown by pilots still recognisable as human and not cybernetically hardwired into their aircraft.

Rumours abound that concern pict-views of Hell Talons daubed in crawling, blasphemous runes, with their cockpits and access hatches welded shut, as if even their masters were afraid that the daemonic entity in actual control of the aircraft might escape. Hell Blades that are piloted by "normal" humans can have pilots of varying degrees of skill, including ace pilots and double ace pilots. The Hell Blade can also be outfitted with Warp Rift technology, which transform the aircraft into an affront to nature, causing clouds to blacken and storms to gather in its wake.

These dark clouds can cause enemy aircraft to experience lightning strikes and extreme turbulence. The aircraft can also be armed with Blight Bombs which unleash a highly toxic biological compound when they detonate, causing sickness and decay to any caught within the blast area. These bombs are normally carried by Chaos aircraft that are favoured by the Chaos God Nurgle.

There is at least a single variant of the Hell Talon known to the Imperium:

A Hell Talon of an unknown Chaos Space Marine warband; this Hell Talon was shot down over the Citadel of Vraks Prime during the Siege of Vraks 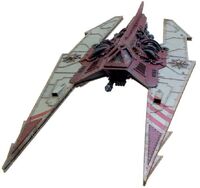 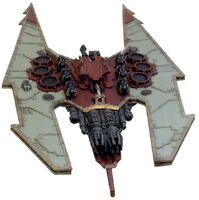 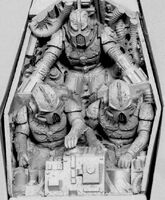