The Hell Blade is an interceptor and air superiority fighter aircraft that is used by the forces of Chaos, including the Chaos Space Marines and mortal Chaos armies. The Hell Blade is a blasphemous fusion of advanced technology and daemonic forces created by the corrupted Hereteks of the Dark Mechanicum.

The craft was designed on the Dark Mechanicum Hell-Forge of Xana II located deep within the Eye of Terror and was created as a replacement for the aging Swiftdeath fighter formerly used by the forces of Chaos as their primary interceptor.

The Hell Blade interceptor represents one of the most resounding technological successes of the Dark Mechanicum; it is a sleek and deadly dagger-shaped aircraft held aloft by vector-thrusting jet engines which make it incredibly fast and impressively nimble.

The Hell Blade is a swift and ruthless killer both in a planetary atmosphere and in the void of space. The Hell Blade is designed to swiftly achieve air superiority for Chaos raiding forces and sweep enemy aircraft from the skies, clearing the way for heavier aircraft, such as the Harbinger, to pound ground defences and allow a Chaos Space Marine onslaught to begin. The slim double-bladed shape cuts through the air, emitting hideous shrieks and wails as it swoops down on its victims.

The Hell Blade is such a potent craft both within a planet's atmosphere and during void operations that it has been quickly adopted by all the forces of Chaos, from the massive warfleets of the Heretic Astartes and Chaos pirate fleets to the more "independent" mortal Chaos militias such as the Blood Pact.

The Hell Blade saw heavy use during Abaddon the Despoiler's 13th Black Crusade and became a common sight above many besieged Imperial planets. They did battle with heavily outnumbered Imperial Navy fighter wings, and there are claims that over 2,000 Hell Blades have been lost over Cadia alone.

Based upon investigations by the Ordo Malleus, it is known that the Departmento Munitorum possesses secret reports that indicate that the origins of this insidious aircraft lie on the hellish Forge World of Xana II, located deep within the Eye of Terror.

The planet is said to be a stronghold of the Dark Mechanicum, also known sometimes as the Dark Priesthood or the Hellsmiths. Xana II is believed to be a world that is wholly given over to Daemon Engines and infernal industries, where mills grind flesh and suffering to make the insane visions of its nightmarish masters real.

Countless millions are enslaved to toil endlessly in a world-spanning network of labyrinthine forges, churning out an infinite supply of weapons and armaments for the Traitor Legions' Long War. The masters of Xana II, said to be half-daemon machines themselves, have long since left the shreds of their Humanity behind and are beholden to no one, be they mortal or Chaos God.

They are willing to sell or barter their unholy inventions and arms to the highest bidder, be they warlord, demagogue, Chaos Sorcerer or Daemon Prince without favour, and their coin of exchange is always the same: raw materials and the flesh of new slaves to feed Xana's endless hunger.

The Imperium remains in ignorance of much of the technology and design that has gone into the creation of the Hell Blade and the other Chaos aircraft of the dreaded Xana II lineage. This is in no small part the result of the frequently spectacular immolation and disintegration the aircraft undergoes when destroyed, a factor that some attribute to the escape of Warp forces from their bindings when the machine is destroyed.

From observation and telemetric recordings, however, the Hell Blade can reach observed speeds of over 2,800 kilometres per hour in a standard atmosphere, with a cruising speed equal to perhaps two-thirds of this mark.

The Hell Blade is only lightly armed, being outfitted with a set of Quad Autocannons (two sets of twin-linked Autocannons) mounted along the center of the aircraft's fuselage with their barrels positioned between the craft's twin dagger-shaped wings.

This light armament makes the Hell Blade unsuited for any other role than that of fast attack and interception, as it lacks any other firepower. The fighter is normally flown with reckless abandon by a hardwired servitor whose only pleasure is the kill.

However, reports from the squadrons of the Phantine Air Corps operating on the planet Enothis state that the elite squadrons of opposing Hell Blades were flown by "normal" pilots not hardwired to their aircraft, while other Imperial forces fearfully whisper that the most successful aces of the Chaos warfleets have a far more sinister origin than mere flesh.

Hell Blades that are piloted by "normal" Humans can have pilots of varying degrees of skill, including ace pilots and double ace pilots.

The Hell Blade can also be outfitted with Warp Rift technology, which transform the aircraft into an affront to nature, causing clouds to blacken and storms to gather in its wake. These dark clouds can cause enemy aircraft to experience lightning strikes and extreme turbulence.

There are several variants of the Hell Blade known to the Imperium:

A Hell Blade of the Black Brethren of Ayreas warband. 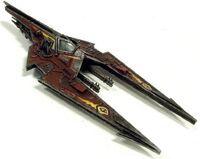 A Hell Blade manufactured by the Dark Mechanicum passes near the Writhing World in the Screaming Vortex.
Español
Community content is available under CC-BY-SA unless otherwise noted.
Advertisement