"Out of the storm it came -- a beast of brass and obsidian, of cable and bone, the wind from its jagged pinions reeking of brimstone and rotten souls..."

The Heldrake is a winged Daemon Engine of Chaos that plummets out of the skies like a living comet, hurtling towards enemy aircraft and crashing claws-first into them from above. Each Heldrake is a vicious predator, hell-forged deep within the Warp.

These monstrous creatures take cruel joy in diving down upon the unsuspecting air support of their enemies in order to shred them into pieces with is scything wings and rune-carved talons. Heldrakes are usually found within the ranks of the Chaos Space Marine Traitor Legions, attaching themselves to the bottoms of Chaos warships and waiting until the ship reaches low orbit of its target planet, then the Heldrake will plunge into the world's atmosphere and engage enemy forces in the war-torn skies.

Like the dragons of ancient Terran myth, packs of Heldrakes soar through the roiling smoke of the battlefield, metal wings spread wide and thrusters burning white hot. Fire bursts from their iron-fanged maws, roaring out in jets to consume the unwary, while the Heldrakes’ razor-sharp talons are strong enough to tear an armoured aircraft in two.

Daemon Engines like the Heldrake are infernal creations of depraved Chaos Warpsmiths, ritually summoned daemons trapped in iron and brass. The hatred and fury of these captive entities burns like a forge, powering the infernal machineries that form both their prisons and their weapons. Compelled by the dark sigils etched into their metal frames, each Daemon Engine must serve its mortal master's will. The greater the daemonic entity, the more powerful the Daemon Engine, and the greater a weapon of war it becomes.

There are many varieties of Daemon Engines, for the minds of the Warpsmiths are as inventive as they are twisted. Some take the form of snarling armoured walkers or rumbling tank-beasts, while others soar on brazen wings. From raining barrages of ectoplasma onto their screaming victims, to ripping apart tanks with their piston-powered claws, Daemon Engines inflict myriad forms of death upon their prey. There are few of these ironclad terrors as infamous or inescapable as the Heldrake packs.

Biomechanical dragons the size of combat aircraft, Heldrakes mount fearsome ranged weaponry within their crushing jaws and boast lethal talons that can rip the wing from a bomber or snatch a pilot from his cockpit in a single, split-second pass. Even one of these malevolent aerial hunters is a terrible threat, and when whole packs of Heldrakes wheel through the sky above a battlefield, no enemy is safe.

During Warp transit, Heldrakes infest Chaos Battleships and Cruisers like wild beasts. Many hang like vast bats from the miles-long superstructures of these jagged voidcraft, suckling the starships' energised lifeblood through cables and pipes. Other Heldrake packs take over whole sub-decks within the bowels of the largest Chaos warships, driving out challengers with jets of Warpflame and ruling over their cavernous domains like beasts of dark legend.

When the Chaos fleet reaches its target world, it is the Heldrake packs that lead the planetary assault. Falling away from the underbellies of their warships in vast swarms, the Heldrakes plunge down through the atmosphere with their metallic wings tucked in tight. Brazen hulls glow with the fires of re-entry, while from behind the Heldrakes' eyes, hate-filled daemonic entities stare out with avid hunger. Down the Heldrakes plunge, arrowing into combat airspace before spreading their wings and soaring into battle.

Heldrakes were once noble fighter aircraft flown by Space Marine Techmarine pilots, though they are now something much more hideous. The dark energies of the Warp have granted them a form much better suited to the predatory role their twisted spirits savour. While all Heldrakes have sweeping wings and the powerful engines common to all Chaos fighter craft, such as the Hell Blade or Hell Talon, the resemblance ends there, for their aspect is one of flying daemonic reptiles or pterosaurs more than any ordinary aircraft.

The miasma of wrongness that surrounds these fell creatures is due not only to their hideous hybridisation, but also to the keening anguish of what remains of the individuals who used to be their pilots. The steersmen inside the Heldrakes, having become consumed by the power and independence granted to them by their fighter craft, have literally become one with their vehicles due to the power of the Warp.

At first, the transformation is of the body -- the corrupted Heretic Astartes pilots shrink back into the interiors of their machines until they see with the craft's auto-senses and speak with its Vox-grilles. Eventually, as the machines themselves achieve daemonic sentience, the transformation affects the pilot's very soul.

After so many centuries swooping through the Warp as pitiless hunters, the steersman's soul melds with that of their war engine until they are entirely subsumed. The pilot's physical form becomes an atrophied, foetal ball that burns deep in the core of the Daemon Engine where a natural beast would have a heart.

Trapped and made subservient to the murderous desires of the daemon with which they now share their prison, the withered, blackened pilots scream in the darkness, their trauma and rage magnified by the Vox-arrays of the Heldrake into haunting cries.

Often, the first sign of a full-scale Chaos Space Marine invasion comes in the form of an attack by Heldrakes. These metallic monstrosities traverse the void between the worlds by clinging to the undersides of Chaos Space Marine attack ships, wings folded protectively around themselves in the manner of bats and their piston-driven claws clamped onto the fuselage above.

Dark umbilical cables, sheathed in organic webbing, probe outwards from each Heldrake's body to burrow into the host voidship's outer surface, drawing away raw energy as a leech draws blood from its victim. When the Chaos warships arrive in low orbit, the Heldrakes detach themselves, unfurling their great wings as they plummet towards the atmosphere of the victim planet below.

Some will soar through the skies as heralds of the destruction to come, retractable weapons pushing out from their gullets and spitting volleys of red-hot bullets that cut down the scrambling, earthbound defenders below. Others prefer to plunge through the clouds into the crucible of battle, screaming in savage joy as they crash headlong into the fight.

The Heldrake is armed with two sets of powerful, piston-driven claws that are capable of tearing into enemy aircraft as easily as if it were flesh. The creature has a set of back claws located on what appear as short legs that the Heldrake uses to hang from the bottom of Chaos starships and to land and latch on top of enemy aircraft, allowing its other claws, located on its longer primary limbs, to tear into the enemy aircraft.

The Heldrake is also armed with a single long-range weapon, a Hades Autocannon, that is located within its mouth. The Hades Autocannon is a massive six-barreled, rapid-firing Autocannon that allows the Heldrake to scythe down masses of enemy troops and aircraft with contemptuous ease.

The Heldrake can also be armed with a Baleflamer in place of its Hades Autocannon. The Baleflamer is a daemonic Flamer weapon that allows the Heldrake to heave out the great gouts of daemonic Warpfire roiling within their chests. The burning ichor that rains down upon their prey ignites flesh and soul alike.

The technical specifications of the Heldrake have not yet been obtained by the Ordos of the Inquisition.

A Heldrake ready to fire its Hades Autocannon 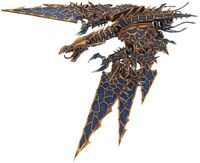 A Heldrake with its Baleflamer protruding from its mouth