The Heavy Mortar Cannon, or simply the Heavy Mortar, is a field artillery piece that has been part of the Imperium’s arsenal since the earliest years of the Great Crusade, and quite likely even the Unification War on holy Terra itself. In this distant past, the Heavy Mortars was used by both the troops of the Imperial Army and the Legiones Astartes, espacially those specialized in siegecraft such as the Iron Warriors. Today however, the Heavy Mortar is only used by the Imperial Guard's siege companies, having been replaced by more sophisticated weapons. The weapon is a larger version of the standard mortar weapon used by most Imperial Guard forces. It is also the same weapon used on the Griffon self-propelled mortar tank. The weapon is classified as field artillery, which, unlike heavy artillery, is used close to the front lines in direct support of the infantry and vehicles that are already in combat rather than being fired from well behind the lines, usually in preparation for an assault. The Heavy Mortar's primary advantages include its wide range of ammunition types, a high rate of fire, and its great simplicity to construct and maintain. The weapon is light enough to be easily towed behind a Centaur utility vehicle, and can be set-up or torn down quickly and moved either to safety or to get closer to the enemy as the Imperial lines advance.

The Heavy Mortar is used to directly support the Imperial Guard's front-line forces by dropping powerful and accurate shells onto the enemy. The weapon has several different types of shells it can use, each with a different and specific purpose. The weapon is loaded one shell at a time, and can only fire one shell at a time, unlike the Imperial Quad Cannon, which fires four shells at a time, but the Heavy Mortar is preferred by most Imperial Guard siege units due to the diversity of its ammunition. The Heavy Mortar can be towed quickly across the battlefield by a Centaur or a Trojan. During combat the Centaur can provide cover to the gunner crew, and the Trojan can be seen travelling back and forth from the ammunition stockpile to keep the crew from running out of shells to fire.

While Heavy Mortars were once used by many different Imperial Guard regiments, their use has declined in recent years because many Imperial officers feel that the weapon lacks both the heavier firepower and longer reach of true field artillery, limiting its use to box-barrages or tactical counter-battery fire. Heavy Mortars that must be towed into combat are now seen as too slow to keep up with advancing mechanised units and self-propelled artillery. Many have now been relegated to the Planetary Defence Forces and Imperial Guard siege regiments.

As one of the lightest types of artillery available to the Imperial Guard though, many still see it as an ideal compromise between mobility, firepower and ease of use. In this case they are an excellent close support weapons for engaging enemy infantry and light vehicles, freeing the heavier artillery for use against more appropriate targets. Its versatility also allows it to fulfill a variety of other roles, from launching illumination shells during night battles or laying down a smoke screen before an infantry attack.

The Heavy Mortar Cannon is widely used by the Death Korps of Krieg's Siege Regiments, where even infantry companies possess their own light artillery support. In addition to the company's own guns, specialised Field Artillery Companies using the Heavy Mortar Cannon can be permanently attached to a given regiment or kept as autonomous reinforcements. 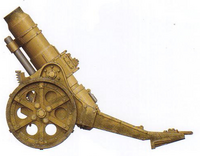 A Heavy Mortar Cannon and its Centaur tow vehicle
Add a photo to this gallery
Retrieved from "https://warhammer40k.fandom.com/wiki/Heavy_Mortar_Cannon?oldid=311821"
Community content is available under CC-BY-SA unless otherwise noted.