A Heavy Gun Drone is a type of Tau Drone (small, disc-shaped, semi-sentient machines) employed extensively alongside Tau units in battle. Heavy Gun Drones consist of an advanced processor unit, which individually has only a basic intelligence (approximately that of a small animal such as a pterasquirrel), and moves about by way of a small anti-gravitic generator and a smaller and much modified version of a Tau Jetpack. This allows the Drone to hover over the ground and skim over most obstacles.

Heavy Gun Drones are a further development of the basic Gun Drone. They are visibly larger with heavier construction then standard Drones and carry heavier weapons in the shape of twin-linked Burst Cannons. On some Heavy Gun Drones, one Burst Cannon has been replaced with a Marker Light so the Drones can range ahead of the main Tau force and pick out targets for destruction via long-range Seeker Missiles. In this role, they act as effective robotic artillery spotters. Heavy Gun Drones are relatively new additions to the forces of the Tau and most versions are still undergoing field trials.

Heavy Gun Drones are always deployed as networked deadly squadrons of automatons that can operate independently for long periods of time without the need for close supervision. Operating in such a capacity significantly increases the intelligence and processing speed of all the Drones in the squadron through the networking of processing, targeting, and sensor systems, making the whole far more deadly than the sum of its parts. Indeed, they were designed to play an extremely active role in combat in support of other Tau forces; and as such cannot be attached to a Tau unit via a Drone Controller device.

So deeply do the Tau believe in the Greater Good, that even their Drones are programmed with self-preservation protocols -- in the face of what its artificial intelligence (AI) deems to be hopeless odds, a Drone will attempt to escape rather than stand and fight. While, at need, Drone Squadrons might be used in high-risk missions or purposefully moved to block enemy paths towards the Fire Warriors, the Tau do not consider drones to be disposable and the drone artificial intelligence will analyse every possibility in order to ensure its own survival.

Despite their basic intelligence, the Tau do not treat their Drones as expendable forces, but as another useful weapon in their armoury. Heavy Gun Drone squadrons are often used in support of other Tau units by supplying additional heavy weapons fire that Fire Warriors lack. Their rapidity and high mobility also allows them to quickly move into unexpected positions, making them ideal for carrying out flanking manoeuvres. Heavy Gun Drone squadrons consisting of four to six Drones will often be deployed from the transport aircraft that carried the main Hunter Cadre they are supporting, such as Orcas and Mantas. Heavy Gun Drones can be deployed from the transports in mid-flight, as their anti-gravitic motors allow them to descend from high altitudes safely. Heavy Gun Drones are also commonly used in a defensive role, such as in Drone perimeter defence teams. In these formations, the Drones will be programmed to hold the line no matter the cost to themselves in casualties. 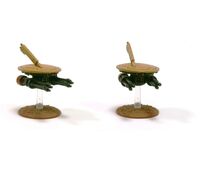 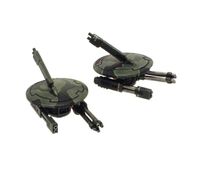 Profile and dorsal schematic views of a Heavy Gun Drone armed with a Burst Cannon and Marker Light
Add a photo to this gallery
Retrieved from "https://warhammer40k.fandom.com/wiki/Heavy_Gun_Drone?oldid=298117"
Community content is available under CC-BY-SA unless otherwise noted.