A Heat Cannon is a Necron thermal energy weapon similar in function and effect to an Imperial Melta Weapon, and is the primary weapon of a Sentry Pylon. A Heat Cannon, like its smaller Heat Ray counterpart, is a weapon of extraordinary power and can reduce the most heavily armoured tanks to piles of molten slag and burn its way through the most heavily protected fortifications at great distances. With every beam it fires, it is capable of vaporising everything in an area with a small blast, and its rate of fire allows it to continually bombard an area with impunity. 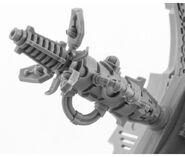 Close-up view of a Heat Cannon mounted on a Sentry Pylon
Add a photo to this gallery
Retrieved from "https://warhammer40k.fandom.com/wiki/Heat_Cannon?oldid=316768"
Community content is available under CC-BY-SA unless otherwise noted.