A Haywire Cannon is a mounted heavy weapon, utilised exclusively by the enigmatic Aeldari Harlequins, that can cripple armoured targets with powerful electromagnetic blasts. When fired, crackling blasts of electromagnetic energy leap from the forked projector-vanes with every shot.

Capable of scrambling even the most robust electrical systems, a single hit from such a weapon can leave enemy tanks and aircraft powerless and at the mercy of the Harlequins' wrath. These weapons are usually mounted upon Voidweavers, a specialised open-topped, anti-gravitic gunship utilised by the Harlequins. 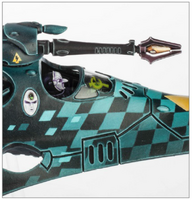 A Voidweaver of the Masque of the Veiled Path utilising a Haywire Cannon
Español
Community content is available under CC-BY-SA unless otherwise noted.
Advertisement