— Captain Hastran of the Hawk Lords

The Hawk Lords is a Codex Astartes-compliant Loyalist Chapter of Space Marines and a Successor Chapter of the vaunted Ultramarines raised during an unknown Founding.

Many Imperial savants suspect that the Hawk Lords is a Second Founding Successor Chapter raised from the existing veteran pilot formations of the ancient Ultramarines Legion's 21st Chapter, who were known as "The Hawks."

The Hawk Lords heavily favour the use of their various gunships, and so are unsurprisingly the undisputed masters of aerial combat amongst the Adeptus Astartes. It is not unknown for pilots from other Chapters to hone their piloting skills while on secondment to a Hawk Lords Talon Wing.

The origins of the Hawk Lords Chapter may be traced back to the Great Crusade over ten standard millennia earlier, when it may still have been a part of the Ultramarines Legion, then known as the XIIIth Legion, before its reunification with its Primarch Roboute Guilliman.

Following the unification with their primarch, Guilliman quickly set about restructuring his Legion's operational doctrine and hierarchy to suit his personal tastes and style of leadership.

While the newly espoused doctrine of structured adaptability became deeply ingrained within many of the Legion's chapters, there were some notable deviations from this pattern. Some few individual chapters, through long-held preference or some quirk of supply, maintained notable strengths of non-standard equipment or personnel.

One of the more noteworthy examples of this was the 21st Chapter, known within the Legion as the "The Hawks", which was renowned for the skill of its pilots.

During the Calth conjunction it was assigned to security duties amongst the orbital platforms and docked warships in Calth's local orbit, and so witnessed the full fires of betrayal committed by the Word Bearers Legion during the Battle of Calth.

Following the end of the Horus Heresy, Roboute Guilliman was responsible for the restructuring of the Imperium's military forces as the lord commander of the Imperium. The vast Space Marine Legions would be broken down into numerous, smaller existing formations, known as a Chapter.

When the Second Founding of the Space Marines was decreed seven Terran years after the death of Horus and the end of his Heresy, most of the old Loyalist Legions divided into fewer than five Successor Chapters, but the Ultramarines were divided many times.

The existing veteran pilot formations of the Ultramarines 21st Chapter may have become a part of the newly founded "Hawk Lords" Chapter.

Recently, in the latter years of the 41st Millennium, the Hawk Lords played a role in defending the Imperial Fortress World of Cadia from the assault of the forces of Chaos during the 13th Black Crusade.

The Hawk Lords' Chapter homeworld is the planet called Preyspire. At present, contact with the Chapter's 7th Company has been lost not many light years from Preyspire due to a hostile engagement with unknown xenos forces.

At the start of the Noctis Aeterna, it was only the sublimely skilled efforts of the Hawk Lords' Stormtalon pilots that protected the Hive World of Thesor from doom.

The Hawk Lords almost never use Drop Pods in their planetary assaults, preferring to make use of their Thunderhawk gunships for low-altitude insertions instead because of the greater control the use of those aircraft allows in making deployments.

So skilled are they in the use of such tactics that the Astartes pilots of other Loyalist Chapters have been known to spend time as pilots in one of the Hawk Lords' Talon Wings to gain the aeronautical skills displayed by the Hawk Lords.

The Hawk Lords wage planetstrike campaigns with greater alacrity than other Space Marine Chapters. They also utilise Stormtalon gunships which excel as a vanguard strike-craft, able to keep pace with their Assault Marines and Land Speeders. In these missions, the Stormtalon's traditional role in Astartes combat is reversed: for the Hawk Lords, it is the principal attack vehicle.

The remainder of the Chapter's rapid moving elements act as escorts and outriders, scouring the attack corridor clean of anti-aircraft fire as the Stormtalon roars in to obliterate its designated target, blasting holes in the enemy battle line before peeling off and engaging another target with similarly devastating effect.

The Hawk Lords primarily wear purple power armour. The Aquila or Imperialis on the chest guard is black.

The helms of this Chapter's Veterans and Veteran Sergeants are also golden yellow.

Veteran iconography is often displayed on a colour roundlet, matching the company colour, on the outside left greave.

The Hawk Lords' Chapter badge is a golden yellow hawk centred upon a field of purple. It is depicted in a similar style to the Chapter badge of the venerable Raven Guard.

With the release of The Horus Heresy - Book Five: Tempest (Forge World Series), it was revealed that the Hawk Lords may have originally been one of several specialist Chapters, known as "The Hawks," created from the 21st Chapter of the Ultramarines Legion after the Horus Heresy.

This is because the 4th and 22nd Chapters of the Ultramarines Legion were known as "the Aurorans" and "the Nemesis" respectively, and went on to become the Aurora Chapter and the Nemesis Chapter during the Second Founding. 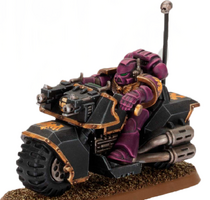 Hawk Lords outrider on his Attack Bike.
Add a photo to this gallery
Retrieved from "https://warhammer40k.fandom.com/wiki/Hawk_Lords?oldid=374381"
Community content is available under CC-BY-SA unless otherwise noted.