The Harbinger is a super-heavy bomber deployed by the forces of Chaos.

The Harbinger is the largest aircraft ever unleashed by Chaos forces and was first deployed during the 13th Black Crusade of 999.M41 against the Imperial positions on Cadia.

The Harbinger has slowly become a more common sight over battlefields where Chaos forces are engaged.

Flown from heavily defended rear echelon air bases, or dropped by Chaos starships from orbit, these gigantic aircraft are capable of carrying monstrously large payloads of incendiary bombs and other ordinance like biological or chemical weapons, that are easily capable of leveling entire cities in their own right.

The Harbinger is a large, lumbering target whose primary weakness is its lack of manoeuvrability. As a result, Harbingers are almost always escorted over their targets by swarms of Chaos Hell Blade and Hell Talon fighers.

The appearance of even a single Harbinger in a war zone is enough for it to be designated as the priority target for all Imperial Navy aircrews across the entire theatre.

Like all Chaos aircraft, the Harbinger is usually piloted either by 4 servitors who have been hardwired into the aircraft's systems or it has been possessed by a Lesser Daemon who transforms the bomber into an extension of its fiendish will as a particularly powerful Daemon Engine.

Harbingers that are piloted by "normal" humans or Chaos Space Marines can have pilots of varying degrees of skill, including ace pilots and double ace pilots.

The Hell Blade can also be outfitted with Warp Rift technology, which transform the aircraft into an affront to nature, causing clouds to blacken and storms to gather in its wake. These dark clouds can cause enemy aircraft to experience lightning strikes and extreme turbulence.

These bombs are normally incendiary explosives, but the Harbinger is also equipped to carry the more powerful Hellstorm Bombs as well as nuclear weapon payloads.

The craft can also carry Blight Bombs which unleash a highly toxic biological compound when they detonate, causing sickness and decay to any caught within the blast area. These weapons are often employed by Harbingers tied to forces that are particularly favoured by the Chaos God Nurgle.

The technical specifications of the Harbinger have not yet been determined by the Ordos of the Inquisition. 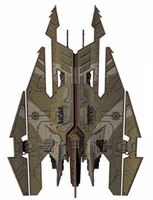 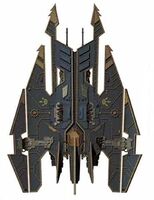 A Chaos Harbinger super-heavy bomber near a Chaos Rhino for size comparison. 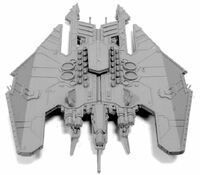