The Hand of Dominion is an advanced version of the mighty gauntlet of the same name once worn by Roboute Guilliman during the Horus Heresy in the early 31st Millennium.

Reconstituted by Archmagos Dominus Belisarius Cawl as with much of the resurrected Primarch's wargear, this new version of the godly Power Fist not only allows the Primarch to crush the life from his foes, but to annihilate them in storms of armour-piercing gunfire with its built-in Bolter.

The Hand of Dominion, in both of its incarnations, was seen as an iconic weapon by the Ultramarines Legion and its Successor Chapters, a symbol of their Primarch's might and authority. 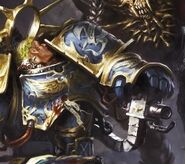 A close-up look at the second Hand of Dominion
Add a photo to this gallery
Retrieved from "https://warhammer40k.fandom.com/wiki/Hand_of_Dominion?oldid=357683"
Community content is available under CC-BY-SA unless otherwise noted.