Black and Brass
The Hammers of Dorn is a Codex Astartes-compliant Space Marine Chapter raised from the gene-seed of Rogal Dorn as a Successor Chapter of the Imperial Fists during an unknown Founding, but which dates back no further than the 41st Millennium.

The Hammers of Dorn are stringent adherents of the Codex, and uphold Guilliman's scriptures with exacting precision. This has fostered a great rivalry with the Ultramarines and their Successor Chapters.

Exactly which Founding the Hammers of Dorn Space Marine Chapter were created in is not known for sure, though most signs point to one in the earlier 41st Millennium.

Despite their relative youth as a Chapter of the Adeptus Astartes, the Hammers of Dorn have already proven themselves during hundreds of campaigns, including the bitterly-fought Achilus Crusade against the Word Bearers, and the Nightfire Wars against the T'au Farsight Enclaves.

Even amongst the Successor Chapters of the Imperial Fists, the Hammers of Dorn exhibit a veneration of Rogal Dorn to the point of obsession. They take pride in their primarch way beyond the norm. They believe Rogal Dorn was the Emperor's true favoured son and take great pride in his accomplishments, especially that their primarch fought side by side with the Emperor during the Horus Heresy.

The Hammers of Dorn upholds the precepts and dogmas of the Codex Astartes with such fervour that its Battle-Brothers go so far as to claim that whilst Roboute Guilliman conceived the Codex, only the warriors of Rogal Dorn can truly master it.

The Hammers are ever seeking to prove their superiority on this point, and take pleasure in pointing out the smallest failings of the Ultramarines and their Successor Chapters whenever they do not match their own militant standards.

The Chapter teachings of the Hammers of Dorn invest a great significance in what they perceive as the rivalry between their primarch and that of the Ultramarines, even going so far as to extend this rivalry to the present day. While the Hammers of Dorn maintain a non-violent rivalry with the Ultramarines and their Successor Chapters, they hold a very real hatred for the Word Bearers Traitor Legion.

By all accounts, this situation arose when the Hammers of Dorn took it upon themselves to prove their superiority to the sons of Guilliman by taking on their rival's ancient foes. Since then, the Hammers of Dorn have fought the Word Bearers on many occasions, to the extent that they have come to regard them as especially hated foes in their own right.

The Hammers of Dorn maintain a combat doctrine not unlike their progenitors, with a particular focus on heavy units. They make extensive use of Devastator Squads and Terminator Squads, as well as Vindicator siege tanks and Dreadnoughts, eschewing speed and manoeuvrability in favour of firepower and protection.

The Chaplains of the Hammers of Dorn teach that their primarch is especially favoured in the eyes of the Emperor of Mankind, for he stood by his father's side during the darkest days of the Horus Heresy.

Guilliman and his descendants, these Chaplains preach, cannot lay claim to such a proud deed, for the Ultramarines were fighting against the Word Bearers Traitor Legion on the other side of the galaxy when the Siege of Terra reached its conclusion.

To date, the two groups have not actually engaged in honourific combat, though tensions often simmer just below the surface when they encounter one another. The Hammers of Dorn look for rivals amongst both friends and foes alike. Battle-brothers from the Hammers of Dorn Chapter are wont to be rivals with any allies that are from the Ultramarines Chapter or its descendants.

The Chapter holds the Word Bearers with the utmost contempt, and will go to any lengths to prosecute them and bring them to meet the Emperor's justice if there is even a whisper of their presence in local space.

The Hammers of Dorn wear black power armour with brass or gold on the trim, helm face and Aquila or Imperialis on the chest guard.

A white High Gothic numeral is stenciled in the centre of the specialist symbol, indicating the squad number.

Company markings are displayed on the left knee plate.

The Hammers of Dorn's Chapter badge is a modified version of that used by the Imperial Fists, a brass, clenched fist holding a brass hammer superimposed over an Imperial Laurel, also brass. This is centred on a field of black.

A Captain of the Hammers of Dorn 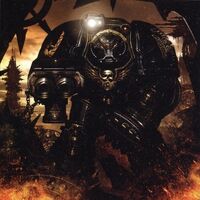 A Terminator brother of the elite 1st Company 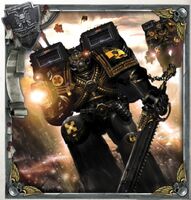 Hammers of Dorn Assault Squad during an aerial assault 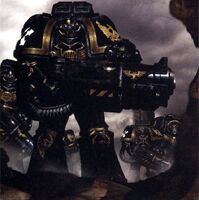 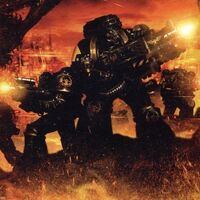 A Hammers of Dorn Bike Squad leading a lightning assault. 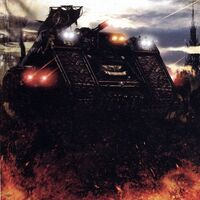 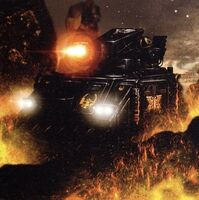 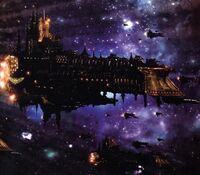 A Hammers of Dorn Scout Marine

A Hammers of Dorn Veteran Astartes

A Hammers of Dorn Force Commander
Add a photo to this gallery
Retrieved from "https://warhammer40k.fandom.com/wiki/Hammers_of_Dorn?oldid=374753"
Community content is available under CC-BY-SA unless otherwise noted.