"A mightier shoal of predators I have never seen; all grace and measured fury."


— Shas'ui Kais, Fire Caste, referring to a squadron of Hammerheads

The TX7 Hammerhead gunship is the anti-gravitic main battle tank of the T'au Empire. First encountered by the Imperium of Man during the Damocles Gulf Crusade, it has since been deployed in almost all campaigns against the enemies of the T'au.

Like a hungry predator on the prowl, the Hammerhead gunship is a menacing sight. It skims over a planet's surface with its massive turret-mounted main gun swivelling back and forth to track potential targets.

The Hammerhead gunship is the main battle tank of the T'au, and all enemies who have encountered it quickly grow to respect, if not outright fear, the might of its main armament -- the dreaded Railgun.

Hammerheads combine the twin principles of manoeuvrability and overwhelming firepower so valued by the T'au, and squadrons of Hammerheads accompany most Hunter Cadres in the field; tasked with the swift elimination of enemy tanks, armoured walkers, and hulking monsters that might otherwise threaten a T'au advance.

Hammerheads are a welcome sight among Fire Warrior and Battlesuit teams alike, for their crews are dead-eye shots and their powerful weaponry more than sufficient to reduce even the most fearsome enemy war machines to smouldering wrecks.

During the Damocles Crusade, the Hammerhead gained a particularly fearsome reputation amongst the Astra Militarum. Entire armoured companies were destroyed before they could close with the T'au battle lines, and whole offensives were transformed into fields of wreckage by the formidable Hammerhead gunship.

Not to be denied their advance, the humans massed their remaining armour and sent them all against the T'au line, seeking to overwhelm them with sheer numbers. But the T'au are veterans of many a battle with the Orks, and they were well-accustomed to such horde tactics; the Imperial tanks were met by well-placed Armoured Interdiction Cadres -- formations of Hammerheads and Sky Rays.

Although outnumbered at least five to one, the superior range and armour penetrating ability of the Hammerhead -- along with its ability to quickly reposition into cover or advance into a better firing position -- more than made up the difference.

By the campaign's end, the Imperial Guard tank regiments were utterly demoralised as they grimly calculated their low odds of survival; they would never leave cover without first thoroughly scanning the horizon for the Hammerhead's distinctive shape.

In the Taros Campaign, Hammerhead gunships were used to their full potential in desert warfare, engaging Leman Russ Tanks from extreme distances with the aid of forward Pathfinder and Stealthsuit teams before withdrawing. Many new weapon variants were also identified on Taros; and as such, the Hammerhead saw use in all aspects of armoured warfare.

In the Canis Salient of the Achilus Crusade now seeking to reclaim the Jericho Reach for the Imperium of Man, Imperial Guard tank divisions have suffered great losses due to the mobility and sheer firepower of the Hammerhead.

The overall design of the Hammerhead is based off the ubiquitous Devilfish chassis, which consists of a sleek and light design powered by complex dual anti-gravitic and jet-propulsion motive systems so that a Hammerhead almost glides over a planet's surface.

The anti-gravitic engines generate "cushions" of air which the Hammerhead floats upon, and its armoured bulk is then driven forwards by two, powerful, multi-directional jet engines mounted on the rear sides of the hull. By pivoting the propulsion units downwards, a Hammerhead pilot can gain extra lift to clear the many obstacles and terrain that often litters a battlefield; obstacles that more mundane tracked vehicles can never hope to traverse.

These jet engines are reliable and efficient compared to Imperial designs, but are still relatively noisy. There are also two lift fins mounted on the front of the tank, each with a recess to house a weapon system or a Gun Drone.

Most of the space within the tank is taken up by capacitors for its weapon systems, additional ammunition, and non-combat systems such as climate control and communications. As such, it cannot carry troops.

The Hammerhead is manned by three crew members, which include the pilot, the secondary pilot who controls the tank's many sensors, communications and navigational secondary systems, and the commander who controls the main turreted gun system.

Override systems are also in place inside the Hammerhead to allow any crew member to take over another's role in case of casualties. A Hammerhead gunship's primary sensors are located in an array under the tank's forward housing in the vehicle's nose.

The vehicle also features a hatch on each side along with a door in the rear to allow the crew inside to disembark if necessary. The armour of the vehicle is made from a dense nano-crystalline metal, named Fio'tak in the T'au Lexicon, that is light, malleable, strong and corrosive resistant, reducing the weight of the vehicle whilst also providing excellent protection.

The Hammerhead is an extremely efficient main battle tank design. It has a well-earned reputation as a tank killer when it is armed with a Railgun. However, it can be equipped for a variety of tactical roles ranging from anti-infantry to eliminating specialised targets such as heavily armoured enemy combat walkers.

It is common to find at least a few Hammerheads deployed in support of Fire Warrior teams. Although well armoured, a Hammerhead is most often kept at a distance to take advantage of the superior range of its weapons. There have been many accounts of Hammerheads demolishing enemy armour with almost contemptuous ease.

Although a Hammerhead gunship performs well in tank duels, the combined arms approach of the T'au requires much more from their main battle tank than just anti-armour capability. It was the legendary Commander Puretide who said "Even the most rampant horde attack can be broken through application of firepower," and the submunition blasts of a Railgun can rip enough bloody gaps in charging formations to halt an incoming Ork WAAAGH! or smash an entire wave of lesser Tyranids.

Secondary weapons are mounted in the front recesses of the vehicle and are primarily deployed to provide anti-infantry fire support. The vehicle's secondary weapons can include one of the following:

All Hammerhead gunships are equipped with a Targeting Array as standard. These are sophisticated electronic targeting systems that assist the gunners' aim in firing upon enemy targets.

Also, as with all other T'au skimmercraft based off the Devilfish chassis, Hammerheads are equipped with built-in landing gear to allow the vehicle to land on the ground if needed; either in the case of failure of the thrusters, or for when the vehicle is simply at rest and deactivated.

Hammerhead gunships can also be equipped with any of the following T'au vehicle support systems:

A Hammerhead armed with a Railgun moving into battle.

Imperial video capture of a Hammerhead Gunship armed with a Railgun during the Taros Campaign.

A Hammerhead ready for action; note the camouflage colour scheme intended to match the vehicle's surroundings.

A Hammerhead Gunship armed with a Railgun.

A Hammerhead in night camouflage armed with a Railgun.

A Hammerhead Gunship armed with an Ion Cannon.

Side schematic of a TX7 Hammerhead of the T'au Sept. 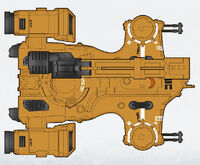 Dorsal schematic of a TX7 Hammerhead of the T'au Sept.

A TX7 Hammerhead with Fire Warrior for size comparison. 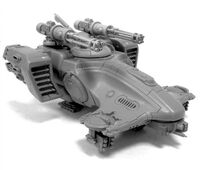 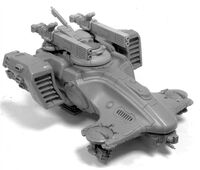