"The sweet sound of suffering"

The Haemonculi, the Lords of Pain, are horrific and insane Dark Eldar flesh-sculptors who have lived within the depths of Commorragh for many Terran centuries, if not millennia. They are master torturers, the Dark Eldar's greatest connoisseurs of pain and terror. To pass the long centuries they compose loving symphonies of agony from those unfortunate enough to be held captive in ther dungeons. Even other Dark Eldar secretly fear the Haemonculi, for they can reshape not just the body but also the soul. The Haemonuli are organised into units called covens that are integral to Commorrite society since they are the true masters of the Dark Eldar's necessary regenerative processes as well as of torture, but they remain the embodiments of terror and paranoia even for others of their species. All know that to anger one of the Lords of Pain is to end up as the subject of one of their horrific tapestries of agony. Haemonculi specialise in body modification and flesh-sculpting and they love to work with a new "canvas" of flesh. If their client wants barbed quills added to his shoulders, the scaled face of an alien reptile, or the eyes of a Viridian Wraithspider, no request is too difficult or bizarre for a Haemonculus to fulfill.

How a Dark Eldar becomes a Haemonculus is unknown. They are all of an ancient age, even for the long-lived Eldar, and their withered and horrific appearances speaks of Dark Eldar so old they have passed beyond the ability to regenerate a youthful appearance no matter how much of others' torment and agony they immerse themselves in. It is possible that the oldest of the Haemonculi, known as the Haemonculi Ancients, contain among their numbers those individuals who inaugurated the very first Eldar cults of pleasure and pain before the Fall, but this also remains unknown, as all Haemonculi physically alter themselves to the point that they barely even resemble other members of the species they mockingly still call their own.

While the physical modifications will differ from Haemonculus to Haemonculus, representing their personal tastes and particular brand of insanity, they are always attenuated and twisted in form. Their wan, pale-skinned frames do not have a spare ounce of flesh upon them, and their waists are devoid of internal organs to better present what they view as a fashionably disturbing facade. Some Haemonucli place their intestines, lungs and heart within a powerfully-muscled piece of additional tissue that sprouts from their shoulders and serves as a repository for stimulants and other alchemical mixtures as well as boasting secondary limbs of mechanical or biological origin. Others replace their blood so that searing ichor or even a potent molecular acid now runs through their modified veins. Their spines have been elongated so that from the lower back, their vertebrae meld into prehensile bone-tails that can lash out at their victims. From their backs emerge horn-like protrusions of bone that frame the Haemonculus' head like an organic rack. These racks are hung with special syringes that channel their noxious concoctions directly into their spinal sump.

As they are for all purposes functionally immortal, the Haemonculi do not pursue the hurried, frenetic pace of the younger Dark Eldar. They move with an unlovely grace, often held aloft by powerful anti-gravity suspensor crystals. Others can slither along the ground like nightmarish serpents using their bone-tails. Patient fiends, they know that the manufacture of a truly perfect death takes time. As the millennia pass, many Haemonculi become ever more deranged and obsessive. One Haemonculus might only dine upon the left hands of his victims, while another may only drink from a fluted glass filled with the tears of children. Having long since transcended notions of wealth held by even other Dark Eldar, Haemonculi particularly prize the acquisition of unusual alchemical ingredients, such as the heart of a Judge of the Adeptus Arbites or the distilled physical essence of a once-proud Imperial Planetary Governor. The former may elicit the stout flavour of pure resolve; the latter the foolish thrill of vain-glory.

In battle, the Haemonculi see combat as yet another canvas upon which to exercise the skills of the true artist of pain. They use extreme wargear that often takes the form of an unusual biological or chemical weapon, such as a compound that allows them to cause uncontrollable tissue growth with a single touch or to remove all water from their foes' bodies in an instant, causing their dried, dessicated corpses to drop to the ground before they are even aware of what is happening to them. A Haemonculus usually drifts across the field of battle using his suspensor crystals with a magnificent if macabre elegance, providing the gift of a gloriously agonising death to one combatant after another. In the rare instance that a Haemonculus himself should die, he will go quite willingly into the void with a hideous smile etched upon his gaunt features. Every Haemonculus knows that he will soon return to seek a fascinating and vicious revenge. After all, for these foul beings, death is just the beginning...

Arcane wargear is extremely rare. Used only by the Haemonculi and their twisted minions, such devices are so strange in function that to a lesser mortal they seem like the tools of a magus or sorcerer:

There are many Haemonucli Covens amongst the Dark Eldar of Commorragh. The most infamous are listed here, though there are a great many more less powerful or newly established covens whose names remain unknown in current Imperial records: 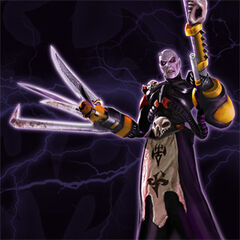 A Haemonculus prepares for combat 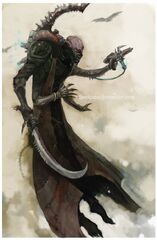 A Haemonculus in combat

The Master Haemonculus Urien Rekarth, prepped and ready for surgery
Add a photo to this gallery
Retrieved from "https://warhammer40k.fandom.com/wiki/Haemonculi?oldid=123169"
Community content is available under CC-BY-SA unless otherwise noted.