A Gun Drone (Kor’vesa in the Tau Lexicon) is a type of Tau Drone (small, sleek, disc-shaped, semi-sentient machines) employed extensively alongside Tau units in battle. Gun Drones consist of an advanced processor unit, which individually has only a basic intelligence (approximately that of a small animal such as a pterasquirrel), and moves about by way of a small anti-gravitic generator and a smaller and much modified version of a Tau Jetpack. This allows the Gun Drone to hover over the ground and skim over most obstacles. As they hover over landscapes, rotating back and forth, their sensor vane constantly transmits vital information about their surroundings.

Although small and somewhat innocuous, those foes that underestimate Gun Drones often pay for such a costly mistake with their lives. Should an enemy be encountered, Gun Drones will accelerate to greater speed, skimming quickly into firing position, their underslung guns swivelling to unload their firepower upon the acquired target. Gun Drones are most commonly armed with twin-linked Pulse Carbines, a formidable weapon at short range, and are used by the Tau Fire Caste in combat alongside Fire Warriors as a form of fire support. Indeed, Gun Drones are the most common type of Drone found deployed by the Tau alongside their forces in battle. They are also ideal for many military applications that involve dangerous or tedious duties.

In battle, Gun Drones will commonly serve under a Tau officer who commands it through the use of an electronic device known as a Drone Controller, and will provide support to their master and act as a form of robotic bodyguard. A remarkable feat of Earth Caste engineering, the artificial intelligence of Drones increases when they are networked together into squadrons, greatly ramping up their processing speed and ability for independent action. Such deadly squadrons have no need for Tau controllers and are capable of impressive tactical feats, and operating independently for long periods of time without the need for close supervision. Operating in such a capacity significantly increases the intelligence and processing speed of all the Drones in the squadron through the networking of processing, targeting, and sensor systems, making the whole far more deadly than the sum of its parts.

So deeply do the Tau believe in the Greater Good, that even their Drones are always programmed with self-preservation protocols, and they will flee and escape rather than face certain destruction in the face of what each Drone's artificial intelligence (AI) deems to be hopeless odds. When needed Drone squadrons might be used in high-risk missions or purposefully moved to block enemy paths towards embattled units of Fire Warriors, but the Tau generally do not consider Drones to be disposable and the Drone artificial intelligence will analyse every possibility in order to ensure its own survival. However, the need to protect their Tau masters overrides this programming and Drones will sacrifice themselves in these circumstances by blocking enemy fire or getting in the way of close combat opponents.

The sleek Gun Drone is well-armoured, highly mobile and its programming can cope with any number of battlefield roles. When grouped into a squadron, Gun Drones can produce a withering fusillade of fire -- a hailstorm of deadly plasma bursts to support Fire Warriors and bolster defence gunlines. Because of their speed and mobility, some Tau Commanders choose to send Gun Drone squadrons on seek-and-destroy missions, unleashing the disc-shaped killing machines to advance along a flank, overwhelming enemy scout patrols or even light vehicles.

Despite their basic intelligence, the Tau do not treat their Drones as expendable forces, but as another useful weapon in their armoury. Most Tau units are accompanied by at least several Drones to assist in mundane tasks. Gun Drones aiding Tau squads will often provide additional firepower that can pin an enemy down due to the flashbang effect of the Photon Grenades fired by the underslung grenade launcher of their twin-linked Pulse Carbines. Gun Drones will also provide protection for their squads, by way sacrificing themselves to block enemy fire or close combat opponents. The Fire Caste doctrine, as laid down in the Code of Fire, instructs all warriors to fight closely together, with each member of a team doing his utmost to protect not just his comrades, but also nearby teams in his Hunter Cadre. Using overlapping fields of fire, Drone squadrons are able to provide mutual support on the battlefield in the case of enemy assaults.

Gun Drones that are attached to a Tau squad can be controlled by a Drone Controller, whether it is in the form of a support system for a Tau Battlesuit, or a hard-wired piece of wargear for Tau infantry. A Drone Controller is an electronic device that can be used by the Tau to further enhance their connections and control over their robotic companions. A Drone Controller acts as a hub of digital communications between the Drone's operator and any Drones that are near the user. It acts as an advanced interface between the operator and the AI battle programs of the Drones, and is often used to direct the Drones’ firepower far more efficiently and with a level of accuracy far greater than would otherwise be possible on the battlefield.

For Fire Warrior Teams, supporting Gun Drones are usually carried by their Devilfish transport in specially designed compartments (the Drone's small jet engines would not be able to keep up with a fast-moving Devilfish). Once the Fire Warriors disembark, the Gun Drones will automatically detach themselves to act as additional fire support, move ahead as forward scouts for the team, or guard a flank. Hammerheads, Sky Rays, and Piranhas can also carry two Gun Drones each in specially-designed recesses. Gun Drones can also be manufactured, transported, and deployed during battle by Drone Harbingers, albeit these Drones only have a limited energy supply before they must deactivate.

Gun Drone squadrons, however, are often used for acting in support of other Tau units by pinning enemy troops in place while the main body of the Tau Hunter Cadre takes further shots at the advancing enemy. Their rapidity and mobility on the battlefield also allows them to quickly move into unexpected positions, making them ideal for carrying out flanking manoeuvres. It is common to see Gun Drone squadrons using their ability to shoot and then moving back to cover to tie up and antagonise enemy units. Other Gun Drone squadrons stalk enemy vehicles, using their mobility to swing around and target the more vulnerable side or rear armour. Gun Drone squadrons consisting of four to eight Drones will often be deployed from the transport aircraft that carried the main Hunter Cadre, such as Orcas and Mantas. Tiger Sharks can also carry up to fourteen Gun Drones which are deployed in flight from its Drone racks. These form a single squadron and can descend from high altitudes due to their anti-gravitic motors. As their jet thrusters allow them to slow their descent, it is possible to deploy a Gun Drone squadron by literally dropping the Drones above the battlefield. The sudden appearance of a unit of Gun Drones, appearing from nowhere with twin-linked pulse carbines blazing, can disrupt the best-laid enemy plans and force them to reposition valuable assets. Gun Drones are also commonly used in a defensive role, such as in Drone perimeter defence teams. In these formations, Gun Drones will be programmed to hold the line no matter the cost.

Gun Drones attached to a Tau Stealthsuit Team are always upgraded with a stealth field generator, which allows them to operate without compromising the Stealthsuit Team's own ability to remain undetected.

Side and top views of a Gun Drone 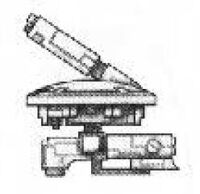 Schematic of a Gun Drone 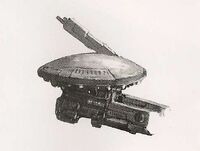 A Tau Gun Drone
Add a photo to this gallery
Retrieved from "https://warhammer40k.fandom.com/wiki/Gun_Drone?oldid=322178"
Community content is available under CC-BY-SA unless otherwise noted.