The Guardian Spear has been the signature weapon of the Adeptus Custodes since the time of the Unification Wars in the 30th Millennium, and in many ways their symbol of office. Elegant and deadly, it is a potent and unique design incorporating a Power Blade and a highly advanced integrated Bolter weapon, and in the hands of a Custodian Guard it can strike and parry at blinding speed despite its size. More rarely, these weapons mount not Bolters but advanced specialised sub-weapons such as compact Meltas or even Adrathic Disintegration Beamers, issued against the deadliest of expected foes.

Guardian Spears are also wielded by Deathwatch Watch Masters, the senior-ranking Astartes officers within the Ordo Xenos' Chamber Militant, the Deathwatch, who serve as the commander of a Deathwatch Watch Fortress or other Deathwatch headquarters installation. The fabled weapons carried by these elite warriors are symbolic of their roles as sentinel. This is a sign of great trust, for it is the same weapon borne by the Emperor's personal warrior elite, the Custodian Guard, yet modified to fire the signature shells of the Deathwatch which contain substances anathema to their targets. When a Watch Master joins the fight on the front line, he cuts down his foes with a cold precision that leaves monsters and tyrants slain in his wake. 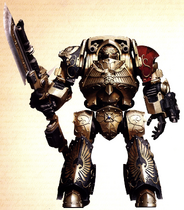 A Contemptor-Achillus Dreadnought of the Legio Custodes wielding a deadly Dreadspear, a scaled-up version of the Custodes' own iconic weapon.

A Custodian of the Tharanatoi wielding a deadly and potent Adrasite Spear, which incorporates the dark relic weapon known as an Adrathic Destructor. 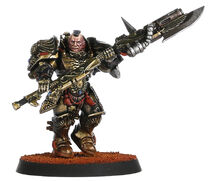 A Custodian wielding a Pyrithite Spear, which incorporates a compact Melta Weapon known as a Melta Beam.
Add a photo to this gallery
Retrieved from "https://warhammer40k.fandom.com/wiki/Guardian_Spear?oldid=319798"
Community content is available under CC-BY-SA unless otherwise noted.