Aptus Non (Production Grade: II-Extremis)
Gryphonne IV, also remembered as the "Lost Forge," is a Dead World that was once a vital Imperial Forge World located in the Shiola Sub-sector of the Segmentum Tempestus' Alduin Sector. Gryphonne IV was the homeworld of the Titan Legio Gryphonicus and some of the fiercest and most skilled Skitarii Legions in the galaxy. Gryphonne IV was known to be one of the most well-defended worlds in the Segmentum Tempestus, which made its destruction all the more shocking.

Before the arrival of Hive Fleet Leviathan, the Forge World of Gryphonne IV had a storied history. Founded during the darkness of the Age of Strife, Gryphonne IV quickly rose to power. By the time the Great Crusade arrived in what would become the Segmentum Tempestus, the Forge World controlled the Gryphonne Octad -- eight star systems rich with mineral wealth. Its Titan Legion, the world-breaking Legio Gryphonicus, fought alongside the Space Marine Legions to earn great victories.

Its last Imperial Planetary Governor was Fabricator-General Darius Hugh. Gryphonne IV was attacked and consumed by the Tyranid Hive Fleet Leviathan soon after its emergence into the galaxy in 997.M41, severely disrupting Imperial industry and supply in that part of the galaxy.

Gryphonne IV, the world of the Legio Gryphonicus ' founding, was known to have been a seat of technological might according to ancient myths predating the Age of Strife, and so formed one of the earliest attempts of the Martian Mechanicum to reach out into the darkness during Old Night. While many such missions resulted in failure and many of the Mechanicum Sleeper-Arks were sundered or lost without trace, doomed before the Emperor's intervention to create the Navis Nobilite, the Martian expedition to Gryphonne IV met with great success.

This was likely a process of conquest over what local human inhabitants remained rather than pure colonisation on the Mechanicum's part, although the truth of this matter has long since been sealed and forgotten by the Imperium. What is known is that after the founding of the Forge World of Gryphonne IV, it quickly established itself as a power in its own right, expanding to dominate a pocket stellar empire of eight nearby star systems which came to be known as the Gryphonne Octad.

Over the centuries that followed, this Mechanicum domain prospered and managed to maintain communication, albeit infrequent and fragmented, with distant Mars. Swearing its domains and arms to the service of the Great Crusade, Gryphonne marched to war at the Emperor's call, and would see its Titan Legion, one of the largest and most ably-equipped outside Mars, take immediate action on many battlefronts.

Having extensive experience and proven tactical doctrines in fighting alongside the infantry forces of the Gryphonne Octad, the Legio Gryphonicus quickly gained a reputation for skill in close support of ground troops, and so was much in demand for assignment to the various Expeditionary Fleets. The Legion, however, was loath to split its forces unduly on deployment, and instead served generally as an independent heavy contingent, assigned to various war zones as strategic needs demanded it.

This in turn led to the Legio Gryphonicus amassing battle honours alongside the Dark Angels, Imperial Fists and Death Guard Legiones Astartes at various times, and their inclusion in the order of battle for some of the most famous and vital campaigns of the Great Crusade, such as the Rangdan Xenocides and the Ullanor Crusade.

The Mechanicum Reserve of Paramar V and its facilities were later granted as a vassal domain of the distant Forge World of Gryphonne IV by the word of the Emperor as part of the rewards made to the Forge Lords of Gryphonne for their great service and sacrifices during the Crisis of the Hungering Gyre in 891.M30. As well as serving to add greatly to the prestige and power of Gryphonne IV and its Magi -- a factor known to have caused some acrimony with Mars -- Paramar V's defences gained further from this union, becoming a sub-bastion and outer forge of the Legio Gryphonicus, further adding to its importance and breadth of facilities.

By the outbreak of the Horus Heresy, Paramar V was a strategic locale the Warmaster Horus could not readily choose to ignore, but one circumstance and the tide of the Great Crusade had put outside of his sphere of influence.

Less than five standard years after the defeat of Hive Fleet Kraken in the Second Tyrannic War, Inquisitor Lord Kryptman noted the tell-tale signs of yet another Tyranid invasion in 997.M41. He implemented the Kryptman Census, burning out dozens of astropaths in the attempt to contact scores of worlds on every fringe of the Imperium. Slowly, the responses -- and lack of them -- formed a pattern, and the venerable Inquisitor was able to chart the course of the Tyranids' latest Hive Fleet to arrive in the Milky Way Galaxy.

Codenamed "Leviathan," this time the Tyranids were approaching from below the galactic plane, attacking from two points spaced wide apart in the shape of a closing pair of jaws, cutting off large portions of the galaxy from Warp travel or astropathic communication. At a great cost in human life, a combined force of Planetary Defence Force troops, two regiments of the Astra Militarum, the Ultramarines and Mortifactors Chapters of Astartes, and a Deathwatch Kill-team under the command of Inquisitor Kryptman crushed the left "half" of the Leviathan on the world of Tarsis Ultra, destroying the Tyranids nearest to Terra, and reestablishing astropathic contact with the worlds between the Leviathan's jaws. The Imperium had won its first victory.

Yet the Leviathan continued to carve its bloody path through the Imperium. Perhaps the Leviathan's main gain was the vital Forge World of Gryphonne IV, home of the Legio Gryphonicus Titan Legion. Kryptman knew he had to slow down the Hive Fleet's advance to buy time for the Imperial Navy's Battlefleets Solar and Tempestus to muster.

With grim finality, he ordered a cordon to be established. Every world within was to be evacuated and undergo immediate Exterminatus wherever possible, thus causing the Tyranids to expend their forces for little gain, the Exterminatus actions denying them valuable biomass to replenish themselves. With one stark, callous decision, the Inquisitor had inflicted the Imperium's worst act of genocide upon its own population since the Horus Heresy. Kryptman was denounced as a Radical and a Traitor; when migrating Orks claimed a score of the former human worlds, he was stripped of his title and cast from the Inquisition by his brethren.

Over the millennia, the defences of Gryphonne IV were built up until they rivalled those of Mars itself. So formidable were its fortifications that the Tech-priests refused to abandon their industries even when it become clear that the Forge World lay in the direct path of Hive Fleet Leviathan. Instead, they shored up their walls, certain that the Tyranid waves would break against them. The Adeptus Mechanicus refused to abandon this important Forge World to Exterminatus.

The Magi of Tesla Prime abandoned their world in 498.997.M41, choosing to use its military forces to bolster Gryphonne IV, one of the principal Forge Worlds in the galaxy, in preparation for a defiant stand against Hive Fleet Leviathan. Isolated and alone, and left for dead in an abandoned star system, the Legio Gryphonicus prepared for war.

Before the arrival of the Hive Fleet, Gryphonne IV boasted some of the finest defences of any Imperial world within the southern reaches of the galaxy. Gryphonne IV's War Griffons Titan Legion was feared for its world-breaking firepower and its Skitarii Legions, who were envied across the Adeptus Mechanicus for their discipline and precision.

The armies of Gryphonne IV fought with consummate skill, yet the xenos invaders were unrelenting. One after another, the Adeptus Mechanicus guns were silenced, the defence lines shattered. The Skitarii were annihilated and devoured by waves of inexhaustible Hormagaunts and the Legio Gryphonicus was torn asunder by Tyrannofexes and Tyranid Bio-Titans. Within solar days, the world was scoured clean of all life. Gryphonne IV was ever after a Dead World -- a grim testament to the folly of human hubris and pride.

The tale of Gryphonne IV does not end with a barren orb, however. When the outcome of the battle was beyond doubt, a handful of Tech-priests fought clear with a few battered cohorts, extracting vital blueprints with which to remake their lost Skitarii Legions.

They vowed to build a new Forge World and continue the Omnissiah's work. Travelling across the torn Imperium, they seek a new homeworld. Even a few Titans escaped, but the Legio Gryphonicus's mechanised gods of battle were last seen fighting upon the Fortress World of Cadia against the Forces of Chaos during the 13th Black Crusade, their final fates unknown.

Though the loss of Gryphonne IV is a calamity of unprecedented scale for the Imperium, the Tyranids were uncaring of their victory and Hive Fleet Leviathan simply moved on in search of fresh feeding grounds before its final destruction during the Devastation of Baal in the early 42nd Millennium after the birth of the Great Rift.

The eagle gripping a wrench and Cog Mechanicum icon of Gryphonne IV is depicted in the rust red colours of Mars, the homeworld of the Cult Mechanicus, and symbolises this forge world's dual commitment and loyalty to both the Imperium and the Adeptus Mechanicus.

The cream robes of Gryphonne IV's warriors symbolise the purity of the machine. This is complemented by the rust red of the inside of their robes and the details of their cog-toothed hems. The rust red toothed iconography which rings the hoods, sleeves and hems of Gryphonne IV Tech-adept robes is reminiscent of the teeth of a cog, a symbol of sacred significance to the Tech-priests of the Cult Mechanicus.

The same colour is used for Gryphonne IV markings on the hulls of their constructs and vehicles. The touches of rust red are a nod towards the Forge World's heritage as part of the greater Adeptus Mechanicus and servants of Mars. Gryphonne IV Skitarii armour is a dull gunmetal grey highlighted by the use of brass trim on both their battle-plate and weapons. 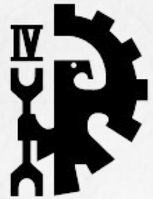 A variant of the official Imperial stamp of the Forge World of Gryphonne IV, used on all of its manufactured goods.
Español
Community content is available under CC-BY-SA unless otherwise noted.
Advertisement