The Ork Grotsnik, also known as Mad Dok Grotsnik, was a typical Ork Painboy obsessed with the performance of "surjery" and rooting around in other people's heads to see what he could find -- or alter. Mad Dok Grotsnik is an absolute terror, the most bloodthirsty and deranged of an unhinged breed. Once a Painboy of some skill, Grotsnik is now all but berserk with the desire to do harm to others. He rose to prominence when he became the personal Dok of the future Ork Warlord Ghazghkull Thraka and Ghazghkull gave him credit for opening up his mind to the messages of the Ork Gods Gork and Mork that subsequently led Ghazghkull to lead the two greatest Ork WAAAGH!s in recent history during the Second and Third Wars for Armageddon.

Raving and screaming, the delusional Dok leads the charge toward the foe at an all-out sprint, unmindful of enemy fire in his desperation to sink needles and blades into unwilling flesh. His surgical skills are questionable at best, and only the most desperate Orks will go to him for medical assistance. Yet Ghazghkull will tolerate no threat to the safety of the Ork who facilitated his visions. Indeed, as Ghazghkull's Great WAAAGH! blazes its way across the stars, Grotsnik has become an integral part of the Goff Warlord's personal retinue. The Dok has not entirely lost his touch with a chain-scalpel -- for some reason he still seems able to rein in his maddened impulses if ever called upon to tend the wounds of Ghazghkull himself, and has saved the mighty Greenskin Warlord's life on more than one occasion. Otherwise, however, Grotsnik's chief value these days is as a fighter. He is as brutal as the meanest Goff Nob, and his sheer boundless ferocity serves him well in the press of battle. In combat the Dok becomes a frenzied whirlwind, his excesses inspiring those Orks around him to ever-greater acts of violence.

One fateful day an Ork Boy named Ghazghkull Thraka entered Grotsnik's operating room, holding his brain in place with his hands. Grotsnik saw a great opportunity to make "improvements" and quickly set to work. Several hours later, Ghazghkull left Grotnik's operating room with an adamantium skull. It is disputed amongst Imperial historians whether the surgery triggered Ghazghkull's latent psychic powers, or whether Ghazghkull was just an unusually delusional Ork, but within a week of claiming to be able to communicate with the Ork Gods, Gork and Mork, after his surgery, he was the Grand Warlord of the WAAAGH!. Suddenly Grotsnik discovered he was very popular among his fellow Greenskins as a metallic skull (known as a "Ghazghkull Special") became all the rage among the Nobs of Ghazghkull's WAAAGH! and Grotsnik's services were in great demand. Grotsnik saw the mob of Orks waiting outside his tent as great new opportunity to explore the wonders of the Ork mind -- and to ensure his own position within the WAAAGH! Unbeknownst to the recipients of the new skulls, embedded within each cranium was a device that exploded when triggered. Grotsnik kept a wireless remote for each Nob that received the surgery, and if he offended Grotsnik, that Nob would often come down at the end of a long day with an unfortunate case of exploding head. Eventually, the Nobs caught on to Grotsnik's scheme, and planned a scheme of their own. One night, Grotsnik was called to repair a disabled Deff Dread. When he arrived, the Dread sprang to life, pinning him down whilst the Nobs that had been recent customers of Grotsnik gathered close and laughed. The Deff Dread powered up its buzz saw and cut into Grotsnik's head. The Nobs left him there, broken and bleeding. Later that night, Grotsnik's Gretchin "nurses" brought their master back to his operating room. They began to operate on Grotsnik in an attempt to revive him. During the night, one Grot vomited into Grotsnik's open head and later, a spider crawled into a warm wet place: Grotsnik's head. Grotsnik died several times that night, but was brought back to life with an inventive use of a Grot-prod by his Gretchin. When Grotsnik awoke, he was utterly, absolutely, and completely mad. He set out into the Ork camp, cackling with glee that was punctuated by the heads of the tribe's top Nobs exploding. Since then, Grotsnik has been a practitioner of the most hare-brained and dangerous surgeries, the most infamous being the "squig brain transfer" which has spread like wildfire to the other Ork Painboyz because of its popularity. Grotsnik has cut off many of his own limbs "just to keep his hand in", replacing them with grafts from other patients. Some say he is making a super Ork out of organs and body parts from patients who have been "overcome with generosity" whilst out cold on the slab. The only reason Grotsnik has not yet been killed by a vengeful customer is the continued protective patronage of Ghazghkull Tharaka, now perhaps the most powerful Warlord in Ork history following the conclusion of the Third War for Armageddon. 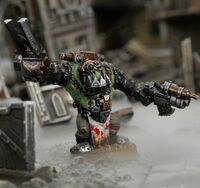 Mad Dok Grotsnik in battle
Add a photo to this gallery
Retrieved from "https://warhammer40k.fandom.com/wiki/Grotsnik?oldid=293725"
Community content is available under CC-BY-SA unless otherwise noted.