The Grot Bomm Launcha, or Grot Bomb Launcher, is an Ork artillery vehicle which fires a large, guided missile that is piloted by a single Ork Gretchin. The Gretchin sacrifices himself in order to ensure that the missile successfully reaches its intended target.

It is unknown by Imperial savants whether this is a punishment forced upon the small Orkoid creature or if perhaps it is even some form of reward. It appears that the Gretchin controlling the missile does not fully understand where this course of action will take him, and it may be possible that these small creatures are simply misled by their Ork Mekboyz into undertaking this suicidal duty.

The first recorded time the Imperium encountered the Grot Bomm Launcha was during the Battle of Grot Town, where Imperial forces led by Captain Marcus Helibron of the Black Crusaders Space Marine Chapter attacked the Ork enclave of Grot Town located on the planet Guilus II. The Enclave had an unusually high number of Gretchins as opposed to standard Orks, hence the name.

The defending Orks were no match for the combined forces of the Space Marines and Imperial Guard and it seemed that the battle would be over quickly, ending with an Imperial victory. However, Gretchin under the direct orders of their Mekboyz strapped themselves into large artillery rockets, and guided them straight into the midst of the Imperial forces as suicide bombers. The first wave of missiles struck directly into an Astartes armoured column as it was moving in for the attack, knocking out a Land Raider and killing Captain Helibron himself.

Imperial records are unclear if the Imperium eventually won the battle, but it is believed that they were defeated as the idea of Grot Bombs has proliferated throughout Ork "kultur" and many other Mekboyz and Warbosses have replicated the idea. Orks that make use of this tactic seem to have no problems finding "volunteers" as pilots.

The Grot Bomm Launcha is simply a modified Ork Wartrakk that is fitted with a powered ramp that allows the vehicle's signature weapon, the Grot Bomm, to be fired. The weapon takes the form of a heavy ballistic rocket that is piloted by a Gretchin as if it were an aircraft. The rocket combines a short-burn rocket motor with a heavy explosive warhead. The rocket is flown into its target and then detonates.

Most Gretchin pilots do not survive the ordeal. As the vehicle only carries a single Grot Bomm, it must either retreat and be reloaded from a safe area or attempt a risky reload while on the battlefield. The Grot Bomm Launcha is usually deployed in artillery batteries consisting of up to three vehicles. 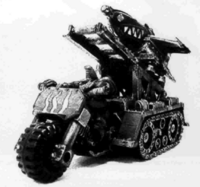 A Grot Bomm Launcha ready to fire its Grot Bomm

A Grot Bomm Launcha in combat

A Grot Bomm Launcha belonging to a warband of Orks from the Goffs tribe. This vehicle was used by Leegrash Boarfang's Blasta Boyz who were stationed in the Hellblade Mountains on Rynn's World
Add a photo to this gallery
Retrieved from "https://warhammer40k.fandom.com/wiki/Grot_Bomm_Launcha?oldid=333617"
Community content is available under CC-BY-SA unless otherwise noted.