The Griffon is a light artillery tank of the Imperial Guard that is equipped with a Heavy Mortar Cannon and is based on the Chimera chassis. The tank is the lightest of the Imperial Guard's artillery and siege tanks, and is smaller in both size and firepower than the Basilisk, Medusa, and Bombard tanks. The Griffon is used as an indirect-fire support vehicle for infantry during offensive sieges and is also used to fire over walls and other barriers. The main weapon of the Griffon is not capable of long-range fire like the Basilisk, or powerful enough to destroy heavy vehicles and structures. The Griffon has been in Imperial service since the time of the Great Crusade, when it was known to the Imperial Army as the "Helios Mortar Carrier."

The Griffon is much maligned by Imperial military commanders because its weapon lacks in range and firepower compared to the heavier artillery pieces and main battle tanks. The Griffon is slowly becoming extinct as a frontline unit as less and less are replaced after being lost during a battle and its manufacturing rate amongst the Imperial Forge Worlds is steadily declining.

Yet, when deployed correctly, the Griffon has many advantages over its larger cousins. The Griffon is much more mobile and has a higher rate of fire than most other armoured vehicles, and can keep up with other fast-moving Imperial forces, whereas a Basilisk would fall behind or even slow down the advance. The Griffon is also able to use the same ammunition variants as the stand-alone Heavy Mortar Cannon and so the Griffon has become a niche weapon in many Imperial armoured regiments.

Known Regiments That Make Use of the Griffon

The Griffon is armed with a single Heavy Mortar Cannon, known as the Griffon Heavy Mortar. The weapon is capable of highly accurate bombardments against enemy fortifications due to the stable platform from which it is fired. The weapon is also able to make use of multiple types of ammunition, each to meet a different set of circumstances. The vehicle is equipped with a hull-mounted Heavy Bolter for self-defence against enemy infantry that get too close for the main mortar to fire upon. This weapon can be switched out for a Heavy Flamer for urban combat deployments. The Griffon can be outfitted with an enclosed crew compartment, which can have a pintle-mounted Heavy Stubber or Storm Bolter equipped. The vehicle can also be fitted with a Hunter-Killer Missile Launcher, Extra Armour Plating, a dozer blade, a mine plough, and camouflage netting, a searchlight, or smoke launchers. 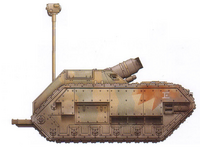 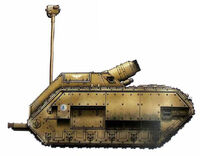 Griffon of the 17th Tallarn Regiment, deployed during the Taros Campaign

An Imperial Army Griffon in combat during the Horus Heresy
Add a photo to this gallery
Retrieved from "https://warhammer40k.fandom.com/wiki/Griffon?oldid=311823"
Community content is available under CC-BY-SA unless otherwise noted.