The Grey Knights Dreadnought is a variant of the standard Imperial Castraferrum Dreadnought combat walker used by the Chapters of the Adeptus Astartes.

Dreadnoughts are cybernetic combat walkers that house the mortal remains of a fallen Space Marine hero so that he may continue fighting for the Emperor and his Chapter even after his body has been fatally crippled and is beyond even the ability of bionics to fully repair.

The Grey Knights Dreadnought is one of the rarest and most advanced Dreadnought variants in Imperial service and is used exclusively by the Grey Knights Chapter, the secret Chapter of Space Marine psykers that serves as the Chamber Militant of the Inquisition's Ordo Malleus.

The other reason for the rarity of Grey Knights Dreadnoughts are their use of the Aegis system, a complex network of protective prayers, runes and other wards which are inscribed into the chassis of the Dreadnought and psychically charged to provide better protection from the sorcerous powers of Daemons and the other servants of Chaos.

While a Dreadnought is a fearsome opponent to face on the battlefield, the Grey Knights Dreadnought can provide more than just fire support to his battle-brothers, he is also able to aid them with enhanced psychic defences.

This is possible as a result of the psyber-circuitry that is incorporated into the Dreadnought's sarcophagus and which can link its own Aegis field to the psychic defences deployed by nearby Grey Knights battle-brothers, thus creating a series of reinforced psychic wards that is much stronger than what individual Grey Knights can project on their own.

Unlike in other Chapters of Space Marines, being interred within a Dreadnought chassis is not seen as a great honour by the Grey Knights. Grey Knights who aspire to such a fate are rare; most simply yearn to while away eternity in the cool shadows of the Dead Fields beneath the Chapter's fortress-monastery on Titan.

However, if a Grey Knight has been gravely wounded but his life can still be saved by the Chapter's Apothecaries, he will often see the necessity of being placed within the metal chassis of a Dreadnought. He will then give the attending Apothecary the needed consent for the transfer.

A Grey Knights Dreadnought is seen as a living connection to the Grey Knights' many millennia in service to the Emperor of Mankind and are considered ancient relics of the Chapter rather than simply as potent cybernetic war machines. This is because these Dreadnoughts represent the living embodiment of the Chapter's past victories, great deeds, fallen heroes, unquestionable loyalties and proven honour.

In this way, they serve the Chapter as a potent symbol of who they are and what they stand for in their service to the Imperium of Man and the Emperor. These Dreadnoughts provide the Grey Knights with a legendary past which many living battle-brothers strive to emulate.

This makes them precious to the Chapter and worthy of the utmost respect as they are venerated for their wealth of past experience in facing the worst enemies of Mankind as well as the wise counsel that they routinely provide to their brethren.

Each of the Grey Knights' eight brotherhoods (companies) maintain their own Dreadnoughts, and most are past Grey Knights Grand Masters or captains. Yet some amongst these Honoured Ancients were once only low-ranking battle-brothers who demonstrated exceptional courage and heroism in battle, and as only the most worthy are placed within the formidable cybernetic shell of a Dreadnought, it is seen as perhaps the greatest honour that the Chapter can bestow.

It is customary for personal consent to be given before the procedure can begin to place a mortally wounded Grey Knight into a Dreadnought shell. This is because so many battle-brothers, as mentioned above, still prefer to rest in peace as heroes of the Chapter in the Dead Fields below the Chapter's fortress-monastery. There, the name of the Grey Knight is engraved into their crypt alongside other great warriors of the Chapter, which is a fitting end for their lifetime of service to the Imperium.

The Dreadnoughts of the Grey Knights are only awakened from their long cybernetic slumbers at times when victory cannot be achieved through mortal means alone. It is at these points of crisis that the greatest heroes of the Chapter need to be awoken to fight once more in defence of Mankind.

The Master Armourers of the Grey Knights enter into the Chamber of Heroes deep in the bowels of the fortress-monastery in order to begin the awakening process. Dreadnoughts are only ever awoken in times of dire need as the Chapter's Grand Masters feel that extensive reliance on these ancient warriors is to dishonour their gift of service.

Grey Knights Dreadnoughts can also be equipped with Hunter-Killer Missile Launchers, Extra Armour Plating], a Searchlight, and Smoke Launchers. The Dreadnought's Machine Spirit can also be blessed by the Chapter's Techmarines to purify it against daemonic attack.

The Dreadnought's sarcophagus can be transformed into a sacred hull, which is covered in potent icons of the Imperial faith, Imperial Cult scriptures, purity seals, and inscriptions of abjuration, making it extremely difficult for a Daemon or other Warp entities to even approach such a potent symbol of faith.

A standard Grey Knights Dreadnought is armed and equipped with:

A Grey Knights Dreadnought may replace its Assault Cannon with any of these options:

A Grey Knights Dreadnought armed with a Missile Launcher may take the following munitions:

A Grey Knights Dreadnought may replace the built-in Storm Bolter from their Dreadnought Close Combat Weapon(s) with either of these options:

A Grey Knights brotherhood is one of the most formidable fighting formations in the galaxy. Under the command of its Grand Master and brother-captain it comprises over a hundred elite warriors of the Emperor, each armed and armoured with the finest wargear available to the Imperium. Even more impressive than the firepower an assembled Brotherhood can muster is its prodigious psychic might, each and every Grey Knight a powerful psyker able to merge his will with that of his brothers to crush anything that stands in their way.

It is rare that the Grey Knights will assemble an entire brotherhood, and only in times of direst need does the Grand Master call upon the combined strength of all his warriors. However, when the brotherhood gathers it is a fearsome and glorious sight to behold. The air practically hums with barely contained energy as the combined wills of a hundred Grey Knights gather in one place, the very Warp responding to their presence.

Just as a squad of Grey Knights battle-brothers have a strength of will greater than the sum of its psykers, so too does a brotherhood outstrip a squad by a magnitude of mental power. The results are nothing less than catastrophic for their foes, the blistering energies conjured by the collective Grey Knights able to banish Daemons in the blink of an eye and push back the tides of the Warp by force of will alone.

For this reason brotherhoods are gathered when a single squad or strike force would not suffice, such as when a world has been enveloped by the Immaterium or a vast and terrible Greater Daemon has torn its way into reality.

Grey Knights brotherhoods also excel at conventional warfare, carrying all the weapons they require to deal with a myriad of foes. Terminator Squads form the mailed fist of the brotherhood, their Nemesis Force Weapons and Storm Bolters more than capable of shredding most foes.

Strike and Interceptor Squads provide a rapid response force for the brotherhood, appearing swiftly to exploit their enemies' weak points or prepare the way for the Grey Knights assault. Purgators provide heavy fire support in the form of Incinerator, Psilencer and Psycannon barrages.

Deployed in the right place, a Purgation Squad can clear the battlefield of foes. To deal with larger enemies, brotherhoods can call upon Dreadnoughts and Nemesis Dreadknights, their servo-assisted fists and blades the equal of any Warp-birthed monster. Finally, the brotherhood has the peerless leadership of a Grand Master to guide it in battle. 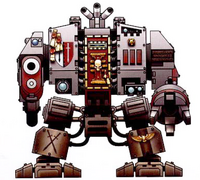 Former Grand Master Orias, interred in his cybernetic sarcophagus in the 39th Millennium after confronting the Death Guard Daemon Prince Herperitus, now resides in a Mark V Grey Knights Dreadnought armed with a Dreadnought Close Combat Weapon and a Psycannon. 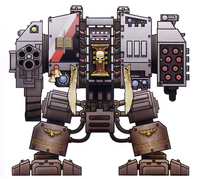 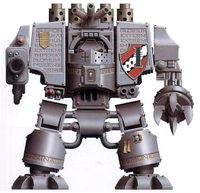 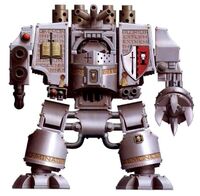 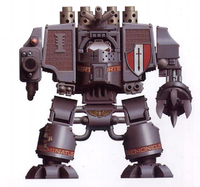 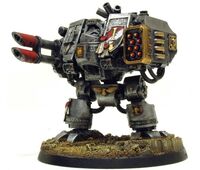 A Mark IV Grey Knights Hellfire Dreadnought armed with a twin-linked Lascannon and a Missile Launcher. 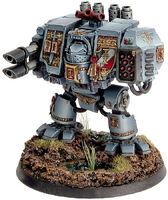 A Mark IV Grey Knights Hellfire Dreadnought armed with a twin-linked Lascannon and a Missile Launcher.
Add a photo to this gallery
Retrieved from "https://warhammer40k.fandom.com/wiki/Grey_Knights_Dreadnought?oldid=376476"
Community content is available under CC-BY-SA unless otherwise noted.