Gretchin or Grotz are basically a smaller subspecies of Orks, who are more cowardly than normal Orks and are usually used as living shields, to clear mine fields, are stepped on to get through difficult terrain, and sometimes even as emergency rations. Gretchins are quite low in the strict hierarchy of Ork society because of their small size (the lowest Orkoids being the Snotlings) and are often used for the dirtiest jobs like scavenging and being used as the football when the bigger Orks get bored.

While they are not as aggressive as standard Orks, they enjoy fighting weaker opponents and are less likely to flee if they comfortably outnumber their opponents. If a Gretchin is particularly wealthy, he may purchase a second-hand, worn-down, low-tech gun. These guns are mainly to reassure the Gretchin that they have a chance of killing something, provided they remember which way to hold the gun.

Even so, Gretchin have to be forced into battle by Runtherds who utilise grabba sticks in order to ensure that the Gretchin stay in battle. A skilled Runtherd can grab a fleeing Gretchin and hurl him into a minefield with one smooth motion. The more tech-savvy of the Runtherds use a grot prod which delivers an electric charge to a Gretchin's vulnerable parts.

Basically all Gretchin work as slaves for Orks, although there is a faction of revolutionary Rebel Grots that developed in the chaos of the Ork World of Gorkamorka. As they are a bit more organised than the larger Orks, Gretchin are often used to maintain Greenskin war machines and artillery. Such work is considered highly undesirable by most Orks, because it prevents them from being in the heart of the battle. Gretchin also serve as attendants or "ammo runts" to Ork Warbosses, assistants to Ork Mekboyz, and orderlies to Ork Mad Doks.

Although they possess a similar physiology to the Orks, Gretchin are not as strong or as tough as their larger brethren. To compensate for this, the Gretchin possess an abundance of low cunning. Commonly known as Grots by their larger counterparts, Gretchin are even more numerous than Orks. They scurry around the larger Greenskins on scrawny legs, and their grasping fingers snatch and steal from the unwary. Gretchin have large, bulbous heads and wide tattered ears that flatten against their bald pates when they are afraid (which is most of the time). Sharp fangs fill their jaws, ever ready to be sunk into the flesh of the weak or infirm, and malice gleams in their eyes whenever there is an opportunity for violence.

The Grots' large and protruberant noses give them an excellent sense of smell, their ears afford them a similarly advanced sense of hearing, and their eyesight is acute even in the dark. These traits, combined with a heightened instinct for self-preservation, mean that Gretchin cannot only survive but even thrive in a society dominated by vicious predators. Some Grots have their survival instinct honed to such a degree that they may possess a rudimentary sixth sense, or are naturally far more fortunate than they have any right to be. The Grots improve their chances of survival further by exhibiting a fawning and obsequious nature to their Ork masters. Though braver Gretchin will pull faces and make rude gestures behind the backs of the bigger Greenskins, few are stupid enough to risk doing so openly.

Grots are fast learners and quick to spot an opportunity, meaning that many wind up as assistants or servants to more important Orks like Mekboyz or Nobz. Others will simply attempt to stay out of the Orks' way, whole groups of Grots fashioning hideouts amid scrap piles or warrens of tunnels too constricted for Orks to squeeze their bulk down. When the time comes to go to war, the Grots will be flushed out of these hidey-holes en masse by the gnashing Squig hounds of the Runtherds, or a few enthusiastic Burna Boyz.

On his own, a single Gretchin poses little threat to a human-sized adversary. However, if there is one quality the Grots have in abundance, it is quantity. On the field of battle the Gretchin advance in great mobs, firing volleys of scavenged ammunition from their poor-quality weapons. They then dive upon the fallen and tear them apart in their scrabbling haste to loot the corpses. Even the most accomplished enemy warriors have found their arrogance punctured when cornered by an entire mob of shrieking Grots. They can prove especially dangerous during naval boarding actions, for while their Ork masters tie up a voidship's defenders in furious point-blank battles, the wily Grots will avoid such bloody fighting like the plague. Instead, knots of Gretchin squirm through air-ducts, sabotage or loot vital machine-components, and overwhelm triage stations full of helpless, wounded combatants. When Grots wreck a starship's Void Shield generatorum, or burst from the ducts to overrun a vital chokepoint mid-battle, the foe learn to respect these nasty little Greenskins in a hurry.

Due to their small stature and low physical strength, the Gretchin are looked down upon by the larger Orks, and forced to perform all the menial tasks their larger cousins are disinclined to do. Orks tend to be lazy and forgetful, and only war and the preparations beforehand really bring out their innate talents. Though the bigger, meaner Ork Boyz will lord it over the smaller, ganglier ones, even a subservient Ork is of limited use when it comes to practical tasks that don't involve fighting.

Most of the day-to-day running of Ork society is therefore left to the Gretchin, whose duties include preparing food, taking messages, hauling stuff about, general organisation and just being around the place when an Ork wants something to kick. This gives the Orks plenty of time to swagger about, getting into fights and coming up with new ways to kill things.

Grots tend to be happy with their lot, as they are cunning enough to understand that obeying the commands of one of the larger Orks to his satisfaction will grant them a measure of protection from the other Orks and their fellow Gretchins. They bear little resentment towards their superiors, for to them Orks are just a fact of life. Questioning this usually leads to a clip round the ear, and not much else. Individual Gretchin can enjoy a relatively comfortable existence by providing valuable services to their Ork masters.

In fact the Gretchin have created an entire enterprise culture of their own within their Ork-dominated society as most Gretchins are also possessed of a rudimentary entrepreneurial spirit. Many operate their own black market businesses on the side, selling fungus beer, roasting Squigs on sticks and selling them as snacks, coordinating the bets when a fight breaks out and then looting the resulting corpses for fun and profit. Even when faced with the ferocious competition of his fellows, a successful Gretchin can enjoy a relatively easy life despite his status as a de facto slave to the larger Orkoids.

When the Orks go to war, the Gretchins follow them, either because they are forced to or because they sense an opportunity for profit. Those Gretchins who serve a powerful protector tend to stick close to the larger Ork and assist their master in any way they can. Other Gretchins enjoy the relative luxury of operating the Orkish artillery pieces, or serve as "Repair Krewz" on the larger Orkish vehicles. Those unlucky enough to have neither a protector, nor a place amongst the vehicle or artillery crews are rounded up in large bands and pressed into service on the frontline by the Runtherdz, to serve as living shields and mine detectors for the Boyz of the various mobs.

The diverse roles that Gretchin play in Orkoid society include, but are not limited to, the following: 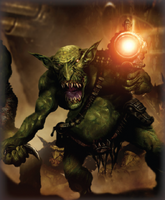 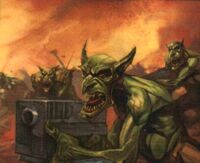 An Ork Gretchin mob in combat 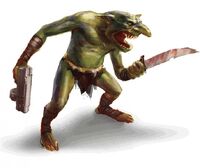 A Gretchin backed into a corner can be a dangerous foe 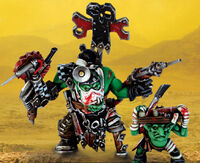 An Ork Painboy accompanied by his Gretchin Orderly 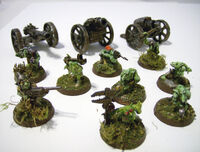 An Ork Gunz battery and its Gretchin operators

A Grot Bomm, which as the name implies is a large bomb guided on target by a Gretchin pilot 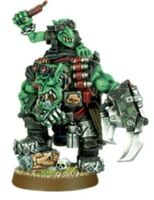 A Kommando Nob with a Gretchin assistant 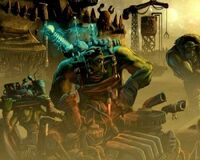 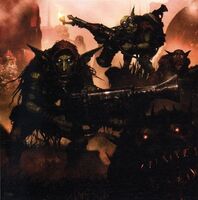 A squad of Gretchin armed with Grot Gunz 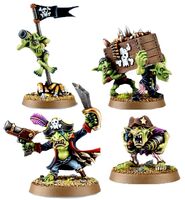 A group of swashbuckling Ammo Grots 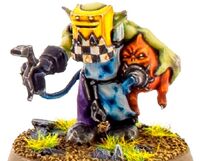 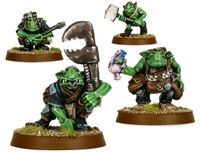 A group of Grot Mekboy assistants 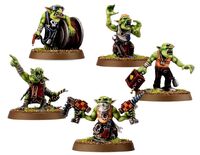