"And there shall come seven plagues, and in them you shall read his works, writ in black bile and red ruin across the land. And he shall come amongst you; all shall feel his touch, and wither. In righteous joy, he bestows these gifts. Rejoice!"

A Great Unclean One is a grotesquely corpulent Greater Daemon of the Plague God Nurgle, the Chaos God of disease, death and decay. These loathsome daemons are the harbingers of the lord of rot and ruin, and amongst Grandfather Nurgle's greatest servants, bearers of his most sacred plagues and poxes.

Their forms are squat and mountainous, covered in rotting flesh and open sores that weep foul rivulets of pus. Hot ropes of intestines dribble out of huge tears in their enormous, bloated and distended bellies. This horrific girth is supported by two impossibly small and atrophied-looking legs, and their inordinately large, bulbous heads are crowned by enormous stag-like antlers.

To the mortal eye, a Greater Daemon of Nurgle is undoubtedly the foulest of all the daemonic servants of the Ruinous Powers. Each of these Great Unclean Ones is shaped in the fashion of Nurgle himself; flyblown, maggot-ridden innards spill into view through the tears and gashes in his swollen belly as he lumbers forwards. Clusters of pustules and weeping buboes erupt from his hide, birthing small swarms of giggling Nurglings. Noxious juices seep from dozens of infected sores, leaving a glistening trail of mucus in the Great Unclean One's wake. Few mortals have the stomach, let alone the will, to oppose such a being.

Great Unclean Ones are Nurgle's lieutenants, the field generals of his Plague Legions. As monstrous and horrific as their appearance is, these Greater Daemons are possessed of a paternal affection at odds with this nightmarish form. Gregarious and sentimental, a Great Unclean One takes pride in the achievements of his followers and looks upon all the creatures in his legion as his "children," and his underlings look upon him as an embodiment of Grandfather Nurgle. Each Greater Daemon pays careful attention to all of his followers, and is noticeably proud of their appearance and endearing behaviour.

A Great Unclean One takes delight in his minions' smallest boils, revelling in the variety and effulgence of their poxes and heaping praise upon them with vociferous proclamations. With a wave of his arms such a monstrosity sends forth his Tallybands, booming words of encouragement and gurgling guffaws across the battlefield. This boundless energy and drive is possessed by all Great Unclean Ones; constantly working to extend the process of rot and decay, they are heedless of their own comfort while parts of the galaxy still remain untouched by Nurgle's bounty.

"Let root rot and bower blight, to feed the plague of fortune."

Indeed, it is not uncommon for Great Unclean Ones to compete amongst themselves in the matter of spreading Nurgle's plaguesome blessings across the galaxy. They take great pride in the achievements of their fellow servants of Nurgle, proclaiming vociferously the splendours of the poxes and sores evidenced by those around them, and laugh heartily at the death and destruction wrought in Nurgle's name.

Their appearances on the mortal plane is heralded with an ear-shattering howl of glee, as they burst through the veil of reality, delighted to walk upon the firmament of realspace once again, spreading their bounty of plagues upon mortals. Often disease and desolation on a planetary scale herald their arrival as entire populations are stricken with the corruption of the Plague Lord's favoured plague which is known as Nurgle's Rot.

This disease is the most contagious, rapacious, and most heinous of all sicknesses, poxes, and fevers Father Nurgle has ever conceived. The afflicted mortals slowly suffer as the plague ravages their bodies, turning them into bloated, rotting, living corpses before they succumb to the inevitable, agonising demise. The bile-slick Great Unclean One then waddles through the collapsed cities and the mounds of the dying, happily bestowing his blessings, borne aloft on a living tide of chortling, chattering Nurglings.

Where the Greater Daemons of Nurgle's rival gods are disproportionate in their master's favour, the Lord of Decay loves all his children equally -- even if some are clearly more accomplished than others. Rather than operating as part of a hierarchical structure, Great Unclean Ones are given epithets and tasks in accordance with the stage of growth and fecundity that they currently represent. Those given the title of "Lord Fecundus" are chiefly concerned with propagating diseases, and lead Fecundus Legions or serve in the Garden of Nurgle. A "Grand Impoxenator" title signifies that the Great Unclean One commands an Infecticus Legion, tasked with the spreading of glorious malignancies. It is said that before a Great Unclean One can gain Exalted status, he must first successfully lead a Plague Legion of each stage of the cycle.

Great Unclean Ones are motivated by all the trivial mortal enthusiasms that drive the living. They are ebullient and raucous, full of a natural impulse to organise and achieve. Driven to coordinate Nurgle’s chaotic endeavours, a Great Unclean One seeks to instill purpose and function in the daemonic rabble under his command. Globules of yellowy-green spittle fly from his wide mouth as the Great Unclean One urges his minions onwards. With chiding grumbles, the Greater Daemon harries those who are tardy in advancing or who seem less energetic in the pursuit of the goals of Grandfather Nurgle. The love of their minions fills a Great Unclean One with joy, but they are consumed with indignation when a foe seeks to thwart Nurgle, and this escalates to paternal rage when his underlings are harmed.

When roused to war, a Great Unclean One is terrifying to behold. Though ponderous, they are all but unstoppable on the advance, shrugging off the bolts and blades of the foe as though they were naught but bothersome insects. Aided by the momentum of his charge, a Great Unclean One will throw his immense bulk upon his victims with all the force it can muster, the selfless act of generosity warming its rotten heart. Those that survive are met with a combination of diseased Plague Flails, iron-bladed Bileswords, filth-encrusted Bileblades and rusted Doomsday Bells. It is not physical attack alone, however, that makes a Great Unclean One so dangerous; by breathing deeply of the festering powers of the Warp, he can summon a pestilent wind to wither his foes, vomit forth a steaming tide of filth, maggots and mucus, or bless his underlings with new tumorous growths that cover over the worst of wounds.

If threatened with bodily harm, the thousands of diminutive Nurglings that follow in the Greater Daemon's wake will attack an unwary opponent, dragging them down in a murderous wave the instant their "father" is attacked. Natural-borne carrion creatures, numbering in the thousands, gather around the Greater Daemon to protect it and trail in its wake. Hordes of sky-blackening flies, rats, vultures, crows, and worms inevitably follow a Great Unclean One's passing.

Great Unclean Ones long ago became inured to pain, a result of their abundant infections, plagues, and virulent sores. Their truly massive size and their ability to withstand almost any level of injury and pain make them dangerous adversaries, as they can absorb astounding amounts of damage before finally falling to the attacks of their foes. These daemon lords possess a hellish prowess which seems at odds with their bulk and squat stature. They barrel into their enemies, laughing boisterously, all the while laying about them with colossal rusty cleavers and seven-headed Plague Flails. The thick cloud of flies which feast at their open sores disrupt the attacks of their enemies and spread the putrid diseases of their host. All the while, the cooing Nurglings form a hideous vanguard for their patriarch and in a playful gesture do all they can to help spread their progenitor's beloved plagues to all those nearby.

"Sing, sweet choir of ailments, let voices and buboes rise. Riddle them with juicy poxes, and ooze out their rotting eyes." 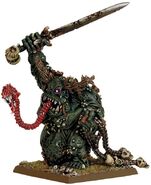 A Great Unclean One in battle.

A sketch of a Great Unclean One found in the forbidden files of the Inquisition's Ordo Malleus.

A Great Unclean One leading a horde of his foul minions.
Add a photo to this gallery
Retrieved from "https://warhammer40k.fandom.com/wiki/Great_Unclean_One?oldid=342177"
Community content is available under CC-BY-SA unless otherwise noted.