A Great Cleaver of Khorne is a Daemon Weapon in the form of a massive Chainaxe that is wielded by the Lord of Skulls Daemon Engine. Like the Lord of Skulls that wields it, the Great Cleaver of Khorne is festooned with the remains of its victims, their skulls forever trapped within. The weapon is large enough that the Lord of Skulls can make use of it as easily as if it was a normal-sized melee weapon, and is capable of tearing apart tanks as if they were human heads. The Great Cleaver is fully capable of cutting entire vehicles into pieces and taking out entire groups of infantry. It is a weapon forged from murder and rage -- and it delivers the very same to its victims.

Many metres in length, the design of each Great Cleaver is barbaric, and it features a gargantuan imitation of a Chainaxe’s sharp-toothed blade. When activated, the Great Cleaver will erupt with eldritch power, the teeth rotating so fast as to become a blurred edge. Immensely large and heavy, no mere mortal can hope to lift a Great Cleaver, let alone take one to battle. Only a khornate Lord of Skulls is worthy enough, and powerful enough, to use it in combat. Once this enormous Daemon Engine has spent its cannon, or can no longer resist its sick desire to watch thick gouts of blood fill the air, the Lord of Skulls will rumble up close to its foe and begin using this weapon to devastating effect.

Capable of causing severe damage to even the mightiest war engines, a Great Cleaver of Khorne will easily rip through body armour or crack the carapaces of monstrous bio-forms, and soft flesh underneath is instantly reduced to pulpy offerings for the God of Blood. The Lord of Skulls then grinds forward, ready to absorb the remains of the victims up into the enormous pressure tanks upon its back where it will augment the boiling blood of murderers already contained within.

Around the barracks of many an Imperial Guard regiment, men talk of the effects of this cleaver on their own forces. As this weapon tears through the air to make contact with armour, it is said the sound it makes is not caused by the path of the blade itself, but rather the screams of the weapon’s trapped souls wailing for blood – a noise so loud it can be discerned over the sound of the mechanical edge. Very few have survived to speak of such matters though, and such rumours are quickly put down by the Commissariat.

Great Cleavers of Khorne have also been witnessed on numerous occasions by loyalist Space Marine Chapters, who are little impressed by the feeble ramblings of shell-shocked Guardsmen. They have seen this brutal weapon wielded often enough to know of its capabilities. It has rent open the hulls of Land Raiders, slaughtering their crews, and it has ground the armoured panels of Dreadnoughts down to scrap. As a consequence, the most skilled tactician will prioritise the destruction of a Lord of Skulls as it rumbles across a battlefield on its brass tracks, lest his tanks or troops become fodder for the Great Cleaver’s grinding mechanical blade.

It takes many vile sacrifices to complete the construction of a Great Cleaver of Khorne. The bitter spirits of murderers are forged within the blade and trapped forever within the fabric of its metal. To satisfy the corrupt expectations of a Lord of Skulls, he may personally select the victims himself. These sacrifices are hand-picked from amongst the most odious characters in the galaxy. Once taken, they are forced to fight in spike-walled pits so that the weakest are eliminated. The use of the most macabre, wretched souls will result in the manufacture of a great cleaver of significant potency; the stronger and more violent the captive; and the more humiliating their sacrifice, the more nightmarish the weapon will become.

This enormous barbed, toothed and skull-encrusted weapon is not so much forged as birthed by an esoteric, violent and corrupt ritual conducted by a cabal of Warpsmiths. Within the sinister and vile citadels of the Dark Mechanicum, the chosen victims are impaled in isolation, but kept from the blissful relief of death for eight full days. Then, all the victims are slaughtered, though it is no merciful act. Their bodies are drained of blood and their souls are bound by eldritch chains until the master Warpsmith is ready for the final ritual.

When that time comes, these captive, screeching souls are blended in arcane ways. Using the eight runes of undiluted wrath, and bathed in the blood of fallen champions, a corrupt, molten metal forms in the soul-furnaces of Khorne’s endless realm of bone. Skulls taken from the foot of Khorne’s throne are crammed within the cooling metalwork, and only then can this be hammered into the shape of a Great Cleaver of Khorne. A skilled Warpsmith will ensure that no tendrils of loathing or hatred are wasted during the process, because such bitter sentiments are an essential part of the fabric of the weapon. Finally, the blade is brought before the brass throne of Khorne for him to bless with vile utterances. The master Warpsmith who forged the weapon and offers it to Khorne is its first victim, and to die at its touch is considered a perverse honour. 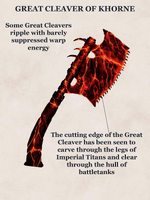 Diagram of a Great Cleaver of Khorne, a terrible weapon of destruction
Add a photo to this gallery
Retrieved from "https://warhammer40k.fandom.com/wiki/Great_Cleaver_of_Khorne?oldid=293796"
Community content is available under CC-BY-SA unless otherwise noted.