A Grav-Gun, also known as a Graviton Gun, is a devastating weapon employed by the Adeptus Astartes based on ancient and forgotten technology dating back to the time of the Dark Age of Technology. Manipulating the very nature of gravity itself, a Grav-Gun turns a target's mass against it, crushing it to pulp under its own weight. This is especially shocking when used against heavily-armoured infantry like Terminators, as the hapless warrior is brutally crushed by the bulk of his ceramite plates until only a crimson trickle remains. Space Marine Chapters are among the few warriors of the Imperium to be gifted with the use of Grav-Guns, and it is considered a sacred honour to be able to wield such a potent weapon.

The secrets of Grav-weaponry construction are known only to a precious few; their design is based upon the graviton weaponry many Space Marine Legions employed during the Horus Heresy era in the early 31st Millennium. The blessed technology used to craft these wondrous weapons remains a safely guarded secret of the Adeptus Mechanicus, passed on only to those Techmarines who have proven their devotion to the Machine God through centuries of war. This is the way it has been since before the time of the Horus Heresy, when large numbers of these weapons were created, then called Graviton Guns, and used extensively among the Space Marine Legions. The knowledge required to maintain such a weapon is as rare as the knowledge required to create them, and for this reason Adeptus Astartes Chapters seldom deploy more than a handful of Grav-Guns.

Even then, these exotic and rare weapons were little understood by the Tech-priests of Mars. The term "Graviton-Gun" refers to a group of gravity projector devices whose sophistication is such that the few that remained were relics of a lost age from before the birth of the Imperium of Man. These weapons proved extremely useful when fighting on a voidship or in a null-gravity environment. The power of the Grav-Gun's highest settings was sufficient to rupture organs and crack bones even inside armour, but its primary use was to impede the enemy and damage machinery without the risks of secondary explosions.

Unlike some of the other forms of Imperial weaponry, like Plasma Guns, Meltaguns and Lasguns, very little is understood about how a Grav-Gun functions. The ancient and venerable Tech-Magos of the Omnissiah have passed down the numerical prayers and ritual equations of creating the Grav-Gun from Tech-Priest to Tech-Priest. Over generations, this knowledge has been reduced to complex analogue rites and droning binary chants. Individually, each of the components of the gun seem strange and incomprehensible, created by lengthy processes which are themselves a mystery to the Tech-Priest toiling to perfect them. However, when assembled in the correct order, and the blessed hymns of awakening are sung, the Grav-Gun takes on lethal functionality.

In combat, Grav-Guns are primarily used to take out heavily armoured troops and vehicles, their gravity warping fire buckling metal and crushing machinery. A Space Marine Tactical Squad will carry a Grav-Gun if it expects to encounter these kinds of foes, as the weapon offers a greater range than a Meltagun, and more reliability than a Plasma Gun. The Grav-Gun also has the side effect that if it fails to kill its target, such as if the the beam only clips it or the gravity field collapses before it can do significant damage, then the enemy is almost always left stunned by the assault. This is due to the combination of the sudden, sharp shock of being crushed by a giant invisible fist, and the disorienting effect of the distorted gravity field.

A sustained blast from a Grav-Gun is completely capable of crushing even large vehicles, from Leman Russ Battle Tanks to Ork Battlewagons. To behold such a spectacle is to witness the tank crumpling in on itself, as if the hand of the God-Emperor were closing around it, internal explosions from detonating ammunition and engines turned inward by the coalescing gravitational sphere. The death of an infantryman killed by a Grav-Gun is equally graphic and a degree more disturbing. At first, the gravity will push the victim's armour in upon him, along with his weapon, wargear and any other kit he carries, crushing his flesh and forcing blood from eyes, ears and nose. Then, as the field strengthens, the victim's own muscles will turn their mass against him, snapping bones and pulverising organs. Finally, the target will implode with a wet crimson splat, only falling into a puddle of gore when the field, its terrible work done, disperses.

If the effects of a Grav-Gun on infantry are horrific, then their effects on buildings are nothing less than catastrophic. An ideal weapon for destroying fortifications and bunkers, the gun attacks the structural integrity of a building, shattering its supports and bringing it crashing down in rubble. Even so, a battle-brother needs to know where to hit the building for the maximum effect, the Grav-Gun still only capable of generating a small-localised gravimetric phenomenon at the point of impact. A good hit, though, will have immediate and disastrous effects. As the enemy cower in their bunker, cracks will snake out from the Grav-Gun hit, and the structure will groan and shudder ominously. At this point there is nothing they can do except try and get out alive as chunks of ferrocrete begin to rain down upon them. Then, with a final tortured shriek, the fortification will cave in on itself, leaving only rubble and dust in its wake.

The Grav-Gun is the two-handed rifle form of Grav-weapon, and operates by firing a stream of graviton particles. This affects the local gravitational field of a target area, making the targeted object either far heavier or lighter depending on the weapon's setting. The Grav-gun also creates a bass rumble as the waves affect the local air pressure, causing the air to vibrate. The effect is generally non-lethal and can be used to incapacitate foes who need to be captured alive, but the power of the Grav-gun's highest settings is sufficient to rupture organs and crack bones even inside armour. Some living targets will be affected more variably; a very large creature may be killed under excessive weight, but most targets will either be slowed or completely immobilised. The Grav-Gun is very useful when fighting in a voidship or a null-gravity environment, as well as during demolition and siege work. This is because it is particularly effective against massive objects such as bunkers or fortifications, where the building's great mass can be used against it, causing it to collapse. 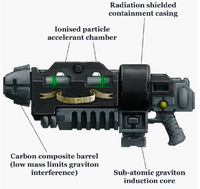 An Adeptus Mechanicus schematic of a modern Grav-gun

An archaic pattern of Grav-gun

A relic pattern of Grav-gun

An archaic Autotellurian Pattern Graviton Gun of the Salamanders Chapter

An archaic Autotellurian Pattern Graviton Gun of the Iron Hands Chapter
Add a photo to this gallery
Retrieved from "https://warhammer40k.fandom.com/wiki/Grav-Gun?oldid=293889"
Community content is available under CC-BY-SA unless otherwise noted.